Through seven games, Adam Thielen leads the league in receiving with 67 catches for 822 yards, including five touchdowns. He is averaging 117.4 yards per game, also a league high, and has yet to post fewer than 102 receiving yards in a game.

Simply put, the Minnesota Vikings wide receiver has been fantastic. But how does the five-year pro measure against the best of the best? We asked eight of our NFL experts to weigh in on where Thielen ranks among receivers in the NFL right now, expanding on a question from our weekly roundtable.

Where does Thielen rank among the NFL’s best wide receivers right now?

Matt Bowen, NFL writer: Third. Antonio Brown is still the No. 1 for me, and that’s not going to change. But Thielen has to be mentioned as a top-five guy, given his numbers this season. That’s why I would put the Vikings’ wide receiver at No. 3, behind DeAndre Hopkins.

Mike Clay, NFL writer: Sixth. Though it might seem odd to place him ahead of, or alongside, the league’s superstars, the fact is Thielen has been playing elite ball for 2½ years now. He is seeing a similar target share to players such as Julio Jones, Brown, Hopkins and Odell Beckham Jr., and yet his production and efficiency have been much better and more consistent this season. I’ll dock him slightly for the edge he gets from working from the slot so often and rank him sixth, but there’s a case to be made that he’s currently the best receiver in the league.

Mike Sando, senior NFL writer: Seventh. Well, seventh and gaining. Thielen is the most productive receiver in the league right now, so if you want to say he’s No. 1 right now, I’m not going to protest too loudly. But as Mike Clay alluded to, Thielen is 10th in receiving yards when aligned on the perimeter, where Jones, Mike Evans, Hopkins and Beckham fill the top four spots. I think it’s a stretch to say opponents would rather face Jones, A.J. Green, Brown, Hopkins, Evans or Beckham, but we have to put Thielen on the cusp of that group.

Kevin Seifert, NFL national writer: First. Simply put, he is the best at the moment. This is a production business, and no one has more than his 67 receptions or his 822 yards. He clearly knows how to get open, even against defenses that are fully aware of him, as his league-high 89 targets indicate. He is making those targets count, having converted more first downs (43) than any other receiver. And his streak of seven consecutive 100-yard games speaks to his consistency. Other observers might have a different personal preference, but the objective facts here point to Thielen.

Field Yates, NFL analyst: Second. And that’s at worst right now. I’d take Brown and his masterful skill set over him, but Thielen’s production is simply unmatched right now. In terms of overall body of work, I would select others, including Jones, ahead of Thielen. But right now, Thielen is No. 2 in my book. He’s without a hole in his game.

Dan Graziano, NFL national writer: First. Right now, no one is playing the position better. And given his circumstances — strong QB play, an unreliable run game, a teammate at the position who also commands a defense’s attention — why would we expect his production to tail off as the year goes along? This is a player who has improved every season and is producing at a level that surpasses Brown, Beckham, Jones and Hopkins on a weekly basis. Right now, he’s the best in the league.

Mina Kimes, senior writer: Fifth. Thielen has been the best wide receiver in the NFL this season, but if you asked me point-blank to build a roster for a game next week, I’d turn to him after Brown, Jones, Hopkins and Beckham. He’s rapidly rising the ranks, though. After all, if you had asked me before this year, I’m not sure I would’ve had him in my top 10.

Eric Karabell, senior fantasy writer: First. The numbers say Thielen ranks right at the very top of the list. While Brown, Jones, Hopkins and Beckham are certainly flashier, Thielen is on a pace for 153 catches and nearly 1,900 yards. Brown has never done that — nobody has. I don’t want to overreact to half a season, but Thielen was great last year, and this is not going away. He has passed Brown, Jones and all the others. Thielen is No. 1.

Cards' Isaiah Simmons to focus on 1 position in NFL 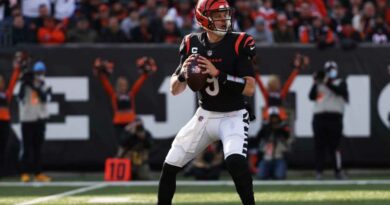 Why are the Bengals resting Joe Burrow, starters vs. Browns?