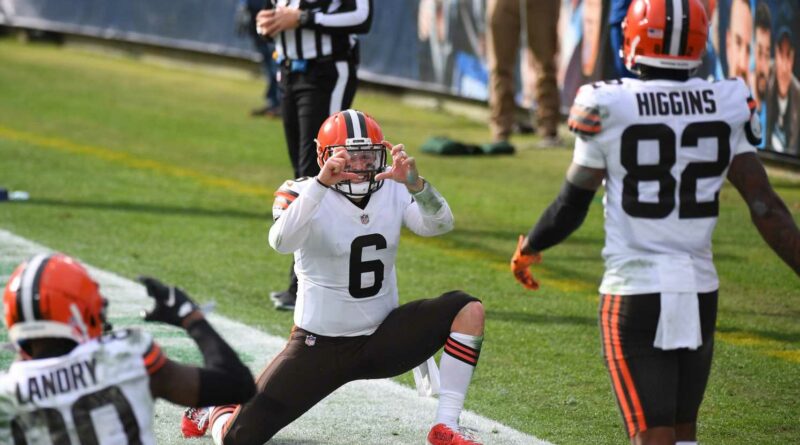 This is the Morning Win, by Andy Nesbitt.

When it comes to the NFL playoffs this year I don’t really have a team in the mix. I mean, I’m from Boston and like the Patriots (who stunk this year) so I am hoping for another trip to the Super Bowl for Tom Brady. But there’s also this other team I’m hoping will have some success and be a factor… and that’s the Cleveland Browns.

I know, I can’t believe I just said that either. But here I am in 2021 hoping for fresh starts and there’s no better fresh start right now in the NFL than the Browns, who made it to the playoffs this year for the first time in 18 years.

What I’m trying to say here is that the Browns have been one of the biggest laughing stocks in all of sports for quite a long time but now that time is over and if you don’t have a dog in this fight may I suggest rooting for… the Browns?

Baker Mayfield and Co. travel to Pittsburgh to face the Steelers on Sunday night, a team they beat in Week 17 but Big Ben didn’t play in that one and the Browns had to hold them off down the stretch to get the W.

What’s crazy about this matchup is that the last team the Browns faced in the playoffs was…. the Pittsburgh Steelers. Kelly Holcomb threw for 429 yards and 3 TDs in that game for the Browns but it wasn’t enough to beat Tommy Maddox and the Steelers who won a 36-33 thriller.

Before that, the Browns hadn’t been to the playoffs since 1994 when they beat the Patriots in the wild-card round and then lost to… the Pittsburgh Steelers.

Now they get another crack at their AFC North rivals and it’s hard not to pull for a team and a city that has seen so much failure over the years. It was fun to see the stadium in Cleveland rocking on Sunday as the team left the field after clinching the playoff spot. The fans that were allowed in will never forget that moment.

Now they get another playoff moment and you know nobody in Cleveland is taking this for granted. I can’t imagine the nerves those folks will have leading up to the Sunday night showdown.

I won’t have those same nerves, those have to be earned, but I can’t wait to see what this Browns team can do in the postseason.

– Steven Ruiz and Charles McDonald handed out some NFL awards for the 2020 season, including MVP, Funniest Play of the Year, and more.

– Dan Le Batard’s teary goodbye to ‘Highly Questionable’ was also a great tribute to his dad. Got a little dusty in here while watching this video.

– NBA fans had lots of jokes about the Heat’s very colorful court on Monday night.

– Russell Wilson did something really awesome for a teammate late in Sunday’s win over the 49ers.

Baker Mayfield and the Browns put the Hue Jackson era in rearview mirror, but they still have a lot to learn