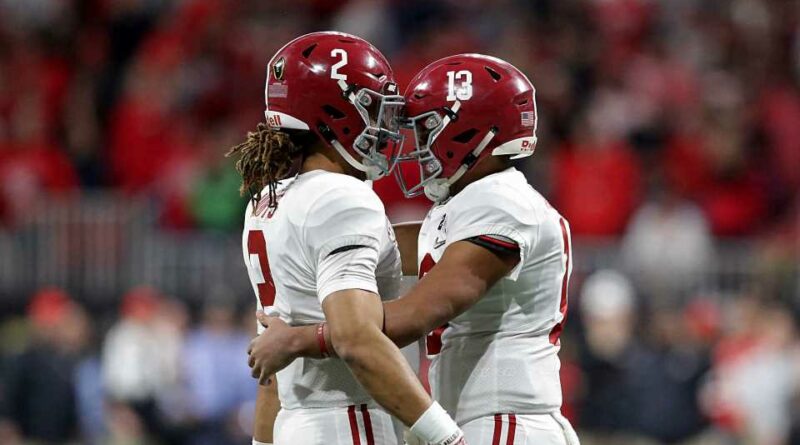 Jalen Hurts and Tua Tagovailoa are two former successful Alabama starting quarterbacks who will be starting in the NFL together in 2021. Hurts will elevate from second-round pick to full-time starter for the Eagles. Tagovailoa, who sat at first as a first-rounder in 2020, is the unquestioned No. 1 young gun for the Dolphins.

When Hurts and Tagovailoa played for Nick Saban and helped the Crimson Tide reach more college football supremacy, they helped set off an amazing run of highly drafted offensive skill players. Since 2018, Alabama has produced three first-round wide receivers in Calvin Ridley, Henry Ruggs III and Jerry Jeudy. At running back, Josh Jacobs went in Round 1 and Damien Harris in Round 3. Hurts and Tagovailoa were selected high in 2020.

Now the program’s offensive explosion is going to a whole other level for the NFL with its incredible national championship-winning foursome: DeVonta Smith, Jaylen Waddle, Mac Jones and Najee Harris. Smith and Waddle are now expected to both go in the top 10 on April 29, bettering Ruggs and Jeudy in the top 20 at wideout. Jones will follow Tagovailoa in going in the early-to-mid first round. Harris, the arguable best running back in the 2021 class, has a chance to join Jacobs as a late first-rounder.

Few players know all those prospects as well as their former teammates, Hurts and Tagovailoa. They competed and developed with Jones. They saw Smith and Waddle as promising young targets. They saw Harris coming up as Alabama’s latest backfield star. Sporting News talked to both former ‘Bama QBs to learn more about the amazing quartet.

Hurts, before he left Alabama and further boosted his draft stock at Oklahoma, is certain that battling for playing time in Tuscaloosa while absorbing high-level concepts allowed him, Tagovailoa and Jones to feed off each other and evolve into the best-possible well-rounded quarterbacks.

“When I went in there, I had like four five-star quarterbacks in front of me. I put myself in that position to compete with the intention of taking over, and it took off from there,” Hurts said. “I know Tua learned a lot from me, and I know I learned a lot from him.

“The drive, the work ethic that Mac Jones has, I’ve always admired that about him. He always believed in himself, so we all had a good bond with that. It’s so crazy looking back at it now that we all have a chance to be in this league at this level of play.”

Tagovailoa, who followed Hurts and was succeed by Jones, heaped the highest of praise on his replacement and highlighted his most underrated attribute.

“Mac is very Tom Brady-esque. He looks up to Tom Brady. He tries to dress at times like Tom Brady. That’s Mac’s biggest role model,” Tagovailoa said. “He’s a very smart kid, on and off the field. He takes care of things he needs to take care of as a very hard worker. He also has kind of that sly athleticism that helps him.”

With the Dolphins picking No. 3 overall and wide receiver being a key offensive need, there’s a chance Tagovailoa could reunite with Smith or Waddle. Hurts also has that chance with the Eagles on the clock at No. 7.

However the early part of the draft plays out, Tagovailoa knows it will be hard for NFL teams to pick between Smith and Waddle.

“They’re both very explosive. They can both take the top off of defenses,” Tagovailoa said. “They’re also very athletic in space, so you give them the ball in open field, they will make something happen for you.”

“In the running game, they’re not afraid to get down and dirty with blocks,” Tagovailoa said. “That’s what makes them complete players for any NFL team who gets one of them.”

Hurts first got a look at Waddle’s ball-handling, speed and quickness when checking out the future wide receiver playing AAU basketball in Houston.

“I saw his athleticism playing basketball and I always knew he was something special,” Hurts said. “He fit right in when he came to Alabama. He’s a pure playmaker who plays passionate football and he loves the game.”

Hurts also recalls his impactful first impression of Smith, which came when he hosted him on a successful college recruiting visit.

“Everyone wants to go out and party and be on the scene, but the literal first thing we did was go to the indoor facility at Alabama, throw some routes and get hard work in,” Hurts said. “That describes him in a nutshell — the maturity he has, the will to win, the competitive nature. He’s got it all. That’s why he had one of the best receiving seasons in college football history.”

As for Harris, Hurts was sold early when he saw him backing up his strong legs with good hands for the passing game.

“Najee came in as a freshman jumping over people, catching the ball with one hand,” Hurts said. “He’s such a big guy, but he can do it all well, catch the ball, run routes. He’s shifty and powerful at the same time.”

When Tagovailoa first saw Harris, he was shocked at how well someone with a 6-2, 230-pound frame could move.

“From high school, when we were getting recruited, I couldn’t believe this guy was in high school. He looked like he had already played a couple years in college,” Tagovailoa said. “He pretty much stood out in every camp I saw him go to. He was the biggest running back, he was the strongest running back. He’s very quick on his feet.”

Tagovailoa was just as impressed with Harris staying grounded for being such a talented running back who knew how good he was.

“I was roommates with him my freshman year and into my sophomore year,” Tagovailoa said. “He’s a great dude on and off the field, very fun to be around. Whoever gets this guy, they’re lucky.”

Alabama used to be known for being a defensive factory for the NFL. But as Saban has adjusted his team to being more high-scoring and efficient, it also is churning out coveted pro-style offensive players. Hurts and Tagovailoa played a big part in flipping the perception and the Crimson Tide have gone full speed ahead with passing, running and receiving game-changers.

The specific NFL teams that end up with Jones, Smith, Waddle and Harris won’t just be lucky. They will have chances to field great offenses because of their respective picks.

‘I wanted the job’: Mike McCarthy confesses he fibbed in Dallas Cowboys interview with Jerry Jones