Fox Sports reporter Jay Glazer is a respected name in the NFL community, but he was criticized heavily Wednesday night for he handled himself this week.

On Tuesday, Glazer claimed he had “big, big news” that would make national headlines. But instead of releasing the information as soon as he confirmed it, like most reporters do, he teased it as a ploy to get people to watch his show, which airs at 11 p.m. ET. Some people were immediately skeptical since it’s an odd way of handling “national” news, but people were still intrigued as to what it could be.

Then Wednesday afternoon comes around and there’s an unconfirmed report of the Vikings and Browns discussing a trade for Odell Beckham. Immediately people thought Glazer’s news was simply this Beckham trade going down.

But Glazer shut that down, and once again teased his “big, big news.”

After waiting it out, Glazer announced his news on his Fox show shortly after 11 p.m. ET. Rams center Brian Allen was the first known NFL player diagnosed with the coronavirus. It’s relevant news, and Allen is thankfully “on the road to recovery,” according to coach Sean McVay.

But the way Glazer handled the situation caught the ire of many, who felt teasing a coronavirus diagnosis for a full day wasn’t a respectable thing to do.

Glazer has not responded to the criticism, or addressed why he handled the news the way he did.

Coronavirus: NFL preparing to ‘adjust as necessary’ amid pandemic 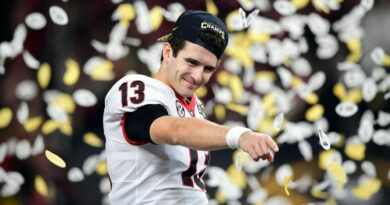