Home » NFL » Jerry Jeudy’s talent was wasted by Broncos last year. Until something changes inside that quarterback room, they’ll waste it again. 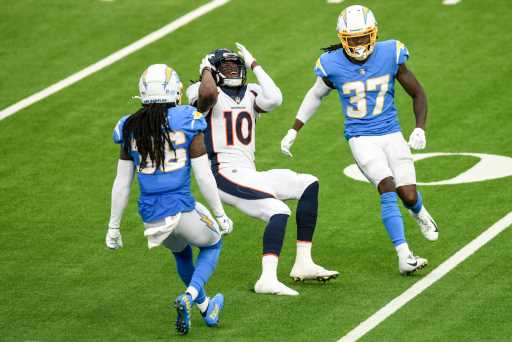 It’s not just you. The Broncos drive other football coaches in this town completely bananas, too, sometimes. Especially when Jerry Jeudy’s name comes up.

I happened to be kibitzing with one of those coaches about something else last fall when the conversation turned, on a dime, to Jeudy. To how the Broncos should be using their new toy. And weren’t.

“If I ran that offense, I’d find ways,” this coach said, almost laughing with exasperation. “I’d get creative. Direct snap it. Do something. I mean, how can you not get the ball in that guy’s hands?”

Easy. Have Drew Lock throw it at him.

OK, we kid, we kid. But the point remains: The Broncos already wasted a season of No. 10 once. We’ve already seen that movie, and nobody wants to sit through a sequel. Jeudy, least of all.

“You don’t know what you’re getting yourself into (in) your first year of doing something,” Jeudy, the Broncos’ gifted wide receiver and the franchise’s first-round pick in 2020, said recently. “I know how to overcome whatever I had in past years to make this year better.”

He can’t overcome a ball thrown six yards to his left. Or eight yards over his head.

According to the wonks at Pro Football Focus, Jeudy was one of only six players last fall for whom more than 20% of their incomplete targets were because of the quarterback — a league-high 24%, in No. 10’s case. The site decreed that he was one of eight wideouts with more than 10 “uncatchable” deep ball targets (14, in this case) and one of nine receivers with five or more “uncatchable” targets in the end zone.

The feet? Money. The hips? Lightning. The separation? Divine.

The hands? Meh. He had too many drops. But it wasn’t all on him, either. PFF said Jeudy wound up as one of only five wideouts in 2020 who saw a “catchable” ball while open or wide open fewer than 85% of the time (81%).

Which means whether it’s via Lock’s lasers, Teddy Bridgewater’s touch or Aaron Rodgers’ mojo, until Dove Valley lands a quarterback who can find No. 10 consistently, the Broncos will never know what they’ve got in Jeudy. None of us will.

“He’s really taken what we saw last year in practice and in games and really worked on it,” offensive coordinator Pat Shurmur said during June mini-camp. “Jerry has been out there being very competitive. He’s made his plays and I can see growth every day.”

Jeudy’s being targeted again, only this time as a “sleeper” breakout candidate on an offense that could use a few. Fellow wideout Courtland Sutton looks good, so far, coming off a torn ACL, and the presence of a healthy Sutton means Jeudy won’t be covered by No. 1 cornerbacks as often, if ever.

No. 10 got chucked into the deep end as a rookie. When he swam, it was gorgeous, that 92-yard catch-and run against the Raiders in the season finale being the prettiest of the bunch.

It was the sinking moments that irked you. The Post’s Ryan O’Halloran charted Jeudy with a team-high 10 dropped passes in 2020. On third down, the former Alabama star got targeted 37 times. He caught 18 of those, for a ratio of just 48.6%. When the Broncos were trailing within the final four minutes of a game, he was targeted 13 times, catching five of the throws for a ratio of 38.5%. That won’t do.

Sutton in 2019 sported a 55.0% catch ratio on third down and an 87.5% mark in the final four minutes of a game in which Denver was trailing. If you’re Bridgewater or Lock, which guy are you more likely to trust in a pinch?

“I’m so quick to catch and run to hurry up and make a play instead of catching first, then run,” Jeudy explained. “That’s mostly what (it was), just trying to make a play too fast and not focusing on the bigger picture.”

That picture isn’t charitable to 2020 Drew Lock, whom Pro-Football-Reference credited with a “bad throw percentage” of 22.9% and an “on-target percentage” at 68.9% a season ago. Bridgewater last autumn checked in at 13.0% and 80.5%, respectively, with the Panthers.

“I know Jeudy is on a mission to be the best,” Broncos left tackle Garett Bolles said of the young wideout. “I know you guys dog him for last year, but that man is a freak. We need to give him the respect he deserves, because that’s what’s going to happen.”

Groovy. But respect, like the passing game, is a two-way street. And none of Jeudy’s freaky side is going to matter if nobody can get the dang ball in his mitts.

Josh McDaniels says ‘book is closed’ on leaving Patriots: ‘I think I have one of the best jobs in the world’

Projected 2019 AFC win totals at midseason: South up for grabs