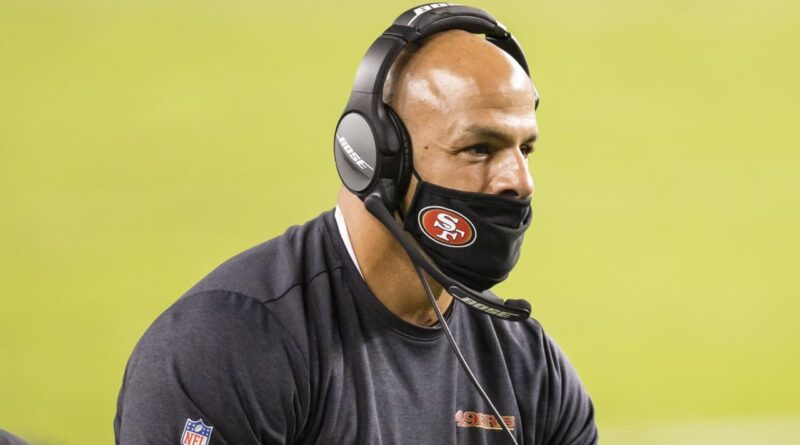 The Jets have completed close to a dozen head-coaching interviews, and their narrowed-down group of candidates includes a hot defensive name.

Robert Saleh is one of the finalists for the Jets job and is flying into the New York/New Jersey area for a second interview, NFL Network Insider Ian Rapoport and NFL Network’s Mike Garafolo reported. Saleh is the first known finalist for the Jets’ opening, and is also still a candidate for the Detroit Lions’ head coaching vacancy.

Saleh has served as San Francisco’s defensive coordinator since Kyle Shanahan assembled his staff in 2017, but his last two seasons have elevated him from coordinator to serious head-coaching candidate. Saleh’s ability shined in 2019 and 2020, a two-year period that produced a stark contrast in team success, but with one common theme that is vitally important to Saleh’s candidacy: Saleh’s defense will make the going tough for any opponent, no matter the surrounding circumstances.

Saleh’s group finished second in yards allowed per game in 2019 en route to a run to the NFC Championship, perfectly complementing Shanahan’s run-first offense. Only a furious comeback of which the 2019 Kansas City Chiefs were capable could take down these 49ers, which is exactly what happened in Super Bowl LIV.

San Francisco’s best days remained ahead of it, even after the Super Bowl loss. Then 2020 arrived, and while the world battled through an ongoing pandemic, personnel losses hit Saleh’s group at every level. Even still, his defense did not fold, finishing fifth in yards allowed per game while missing reigning Defensive Rookie of the Year ﻿Nick Bosa﻿, among many others who came and went due to injury or offseason moves (i.e., San Francisco’s trade that sent ﻿DeForest Buckner﻿ to Indianapolis).

With the 49ers falling back to the group of average teams due to their many personnel losses, Shanahan and Saleh each produced enough game tape to prove their worth as coaches. San Francisco managed to remain competitive on a weekly basis despite playing with plenty of backups, and a large part of the credit is due to Saleh, whose fiery nature makes him a favorite of broadcast cameras. While Saleh’s ecstatic sideline eruptions provides us with great television, his coaching prowess is most valuable.

Saleh could get a chance to prove his worth as a head coach in 2021. As of now, he’s very much in the running with at least one team in need of a new head man.

How Isaiah Simmons became the linebacker of the future