The Jets are picking up the pieces from their second-half collapse and attempting to assemble a better product.

There is good news for the Jets, who finished 2022 losers of seven of their final eight games: Ownership isn’t demanding instant success in 2023.

“No. I don’t do mandates,” owner Woody Johnson said Thursday, via The Associated Press. “We’ve all had a long wait. 54 years since the last Super Bowl is too long. Way too long. I’d like to change that fast, but mandates don’t work.”

What also didn’t work was New York’s offense in 2022. After two seasons with 25th- and 26th-place finishes in total offense, the Jets mutually split with offensive coordinator Mike LaFleur on Wednesday. It wasn’t an easy decision for head coach Robert Saleh, who brought LaFleur with him from San Francisco to New York in 2021, and told reporters Thursday it “felt like it would be in everyone’s best interest” if LaFleur pursued opportunities elsewhere.

LaFleur wasn’t the only coach to leave the Jets this week. Saleh also announced the departure of offensive line coach and run game coordinator John Benton.

“Not going to get into details on that one,” Saleh said. “Love John. He’s been coaching in this league for a very long time, I’ve been with him for a long time. Just wanted to in a different direction.”

It’s not quite wholesale changes for Saleh’s staff, but after failing to carry its share of the load in consecutive seasons, changes needed to be made to the offense. It also became apparent late in the campaign another change would be necessary at the game’s most important position.

Zach Wilson’s lack of improvement shifted from worrisome to catastrophic for the Jets in 2022, especially after New York lost promising rookie Breece Hall to a season-ending knee injury. Wilson was benched twice during the season and failed to capitalize on the opportunities that came his way, allowing critics to peg him as the reason for the Jets’ shortcomings in the second half of the year.

LaFleur couldn’t salvage Wilson before leaving the team, and it appears likely they will be looking for outside help that can immediately upgrade New York’s offense in 2023.

Johnson told reporters on Thursday that he “absolutely” is willing to spend big on a veteran QB this offseason.

“We’ve got a cap so there’s an amount you can spend,” Johnson said, per ESPN.com. “But, yeah, yeah. That’s kind of the missing piece.”

“We are going to be aggressive as heck when it comes to quarterback play and making sure that we do everything we can to satisfy that position,” Saleh said. “Do I want to be as arrogant to say I think this is plug and play where we’re going to get better? When you can run the ball, you’ve got special teams and you have a top-five defense, you’re supposed to be in the playoffs. I think that we’ll be able to continue on the trajectory that we had been going on.”

New York’s defense certainly played at a playoff-worthy level in 2022, but the offense lagged significantly behind, especially after losing Hall. On paper, the Jets appear ready to take the next step, which should include a playoff berth in their future — provided they find a quality quarterback.

With expectations comes pressure. If and when the Jets find a quarterback — the offseason promises to be an exciting one at the position for a number of teams — folks will no longer accept a cellar-dwelling season in New York, even if Johnson isn’t applying pressure publicly.

New York is in a decent spot in terms of roster quality, but Saleh knows complacency will only produce similarly disappointing results. After a productive 2022 draft, the Jets can only benefit from a similarly positive offseason, which can include the return of injured key players like guard Alijah Vera-Tucker, in 2023.

“It’s never one person, and I’ll stand by that. We were 14th in the NFL in scoring when Breece and AVT were on the field, and it just kinda disintegrated from there. But there’s a lot of promise with that group. We’ll get healthy, we’ll continue to add and really excited to see the direction that it can go.”

New York is hoping the direction is upward. The Jets have plenty of work to do in the meantime. 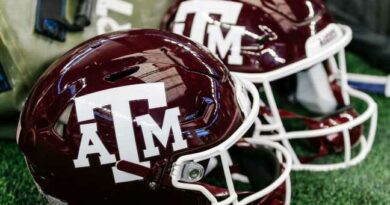 Chargers vs. Raiders: Who to start/sit in fantasy for ‘Thursday Night Football’

Colts GM: ‘We can’t go back into our bubble’