There’s been little to no movement on Jimmy Garoppolo’s status with the 49ers since he last spoke with reporters.

The same could be said about Garoppolo’s ability to throw at this point in time. Garoppolo is in the midst of shoulder rehab following surgery and isn’t yet cleared to toss the football around, but that doesn’t mean he isn’t preparing for whatever his future holds.

“I’m not where I want to be yet, obviously the shoulder surgery went well, rehab’s been going great, but it’s a process,” Garoppolo said during an appearance on SiriusXM NFL Radio. “And I knew going into the surgery what it was going to take to get the shoulder back right, but we’ll be throwing here soon, gotta keep going in the right direction. It’s a long offseason, it’s already been crazy with all the trades, guys going to different teams, whatever it is.

“I don’t know, it’s just one of those things where I’m just going to let the chips fall where they may and work my ass off like I always do, when you do that, good things will happen for you.”

Garoppolo has proven to be an ideal teammate even when it’s been clear the plan is to replace him. The veteran manned the starting role in 2021 after San Francisco moved up to the third-overall pick and took Trey Lance, and instead of allowing self-pity to envelop him, he led the 49ers to the NFC Championship Game, and did so while battling multiple injuries.

“It was a strange year. I don’t know if I’d wish that on anybody,” Garoppolo told NFL.com’s Adam Schein of Mad Dog Sports Radio on SiriusXM. “It worked out. We’re here now.”

Garoppolo’s effort and a stagnant quarterback market might lead him back to San Francisco. Anticipating an offseason trade, Garoppolo essentially said his goodbyes on Feb. 1, but the quarterback carousel spun wildly without leaving room for him. Since then, the 49ers have publicly stated they likely won’t release Garoppolo if they can’t find a suitable offer for him, leaving open the possibility he returns to play another year with San Francisco.

If that happens, he might have to win a quarterback competition with Lance to keep his job.

Garoppolo did not show up in Santa Clara for the team’s offseason workouts this week, but with his rehab still far from complete, it’s no surprise he’s not lifting weights with his teammates. A notable teammate, receiver Deebo Samuel, also wasn’t in attendance and might not be a 49er in 2022, at least if his trade request is satisfied.

“I don’t know exactly what’s going on behind the scenes, what the reasons are for everything, but what they would be getting in Deebo is one of the best players that I’ve ever played with,” Garoppolo said. “One of the best football players, one of the best guys I’ve ever played with. And I’ve been with Deebo since he was a rookie, so I’ve seen him evolve and grow. The way that he sets the tone for us, in practice, in games, in meetings, whatever, he puts his heart into it, and you’ve got to appreciate a guy like that, just a teammate that’s willing to put it all on the line for you.

“However this whole thing works out for him, he deserves his money, he’s going to get it, one way or the other, I just wish the best for him. He’s all-time, and I just appreciate him as a friend.”

With or without Samuel, Garoppolo remains a member of the 49ers for now. There’s still room for movement elsewhere (Carolina or Seattle, perhaps), with much of it depending on how the draft unfolds next week.

Regardless of location, Garoppolo has a season for which he must prepare. He said he’s on track for a return, though he won’t put a timetable on it yet.

“I’ll definitely be ready, to what degree, we don’t really know that yet,” Garoppolo said. “I mean, we haven’t even really started throwing yet, so we’ve still got a little ways to go, but I’m definitely feeling good right now, feeling happy with that.”

Garoppolo has done everything right as a veteran, and though his ceiling isn’t as high as the premier class of quarterbacks, he’s certainly a serviceable option. We’ll see what his future holds in the next month. 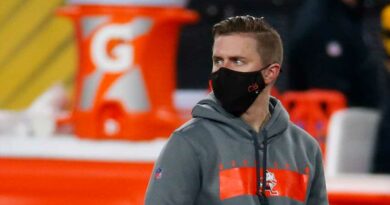