Joey Bosa is finally progressing with his foot injury.

The Chargers defensive end provided an update on his status Monday, saying he has ramped up his rehabilitation in recent weeks.

“(It’s) the first time that I’m really making some strides to get out on the field,” Bosa said, via the team’s website. “It’s been a slow progression ever since I left. We kind of started from square one, literally walking on the field. You have to walk before you run. I know it’s kind of silly, but it’s kind of how it goes. It’s simple walking. Toe walks. Heel walks. Rising up on my toes. It’s just been a very slow progression.

“I’m feeling good. Straight ahead is really good right now. Not much discomfort. It’s definitely been something that’s tough to deal with; managing but not pushing it too hard, and not being able to get any quality work in the next day because of it being too sore.”

Bosa has been dealing with the foot injury since the offseason. It’s been described as a bone bruise, and the team wants to keep him off it to avoid surgery.

While Bosa received a “very clear message that this was going to be bothering me for a while,” he’s confident in the small steps he’s taken throughout his recovery.

The Chargers have played well in Bosa’s absence, as they’re 5-2 coming off a bye week. Los Angeles is next slated to visit Seattle at 4:05 p.m. ET Sunday. 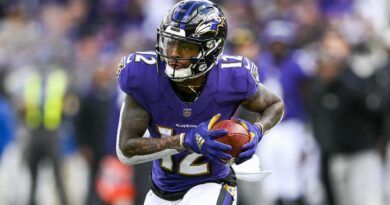