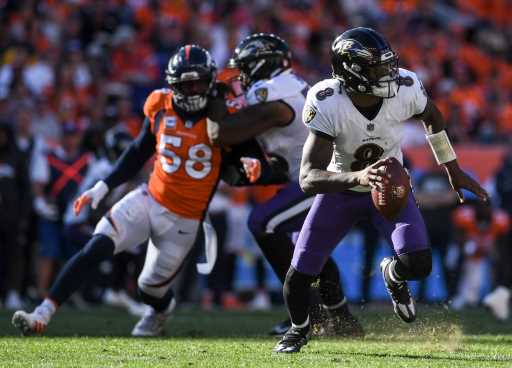 On the final play of the Ravens’ bruising 23-7 win over the Broncos on Sunday, Baltimore coach John Harbaugh elected to run the ball instead of taking a knee to drain the clock.

With Lamar Jackson’s five-yard rush to cap the action at Empower Field, the Ravens finished with 102 yards on the ground and tied the NFL record for consecutive games with at least 100 yards rushing at 43.

Harbaugh made no apologies for the play that epitomized how the Ravens pushed the Broncos physically and tactically out-maneuvered Denver to turn what was supposed to be a close game into a rout.

“(The streak) is one of those things that’s meaningful,” Harbaugh said. “As the head coach, you’ve got to be mindful of your team and your players and your coaches and what the record means to them… It’s a very, very tough record to accomplish and it’s a long-term record.”

After rushing for 73 yards in the first quarter, the Broncos had just 33 yards rushing the rest of the way and finished with 254 total yards. Baltimore had 406 yards of offense and five sacks on defense. The Ravens pressured quarterback Teddy Bridgewater for much of the first half before he left the game with a concussion on a hit by linebacker Odafe Owehon late in the second quarter.

While the Broncos viewed the showdown against quarterback Lamar Jackson and the Ravens as a litmus test following a soft September schedule, the Ravens saw their trip to Denver as a way to solidify their identity following a rash of significant early-season injuries and three close games to begin the season.

“These are the type of wins you have to stack in order to do anything (in this league),” Harbaugh said.

“There’s very few of those moments when you get to be sentimental (as a player),” Campbell said. “To be able to play in this stadium, I kept thinking about when I was a kid and dreaming about playing in this stadium… And it was great to go out there and get a win.”

Campbell said Baltimore’s defense took advantage of the Broncos’ injuries up front. Second-year pro Netane Muti and rookie Quinn Meinerz filled in for Graham Glasgow and Dalton Risner at left guard and right guard, respectively, as both starters were inactive.

“You definitely want to try to take advantage of the youth, and we had a good game plan because we knew earlier in the week there was a chance (Glasgow and Risner wouldn’t play),” Campbell said.

Harbaugh said the Ravens’ pass-rush was teed up by solid coverage from a secondary that entered the game ranked 30th in the NFL in average passing yards given up. Neither Bridgewater or backup Drew Lock were able to find an extended rhythm in the pocket.

On the other side, Jackson said the Broncos’ defensive game plan was to take away the Ravens’ stout run game by stacking the box. Jackson responded by throwing for 316 yards on 22-of-37 passing, with a 49-yard touchdown strike to Marquise Brown in the second quarter the play that turned the momentum in Baltimore’s favor.

“They were running a lot of cover zero,” Jackson said. “I guess their game plan worked, because I didn’t really run it that much (with 28 yards total). But we were able to pass for a lot.”

Melvin Gordon holdout: Chargers will not give running back new contract this season, GM says