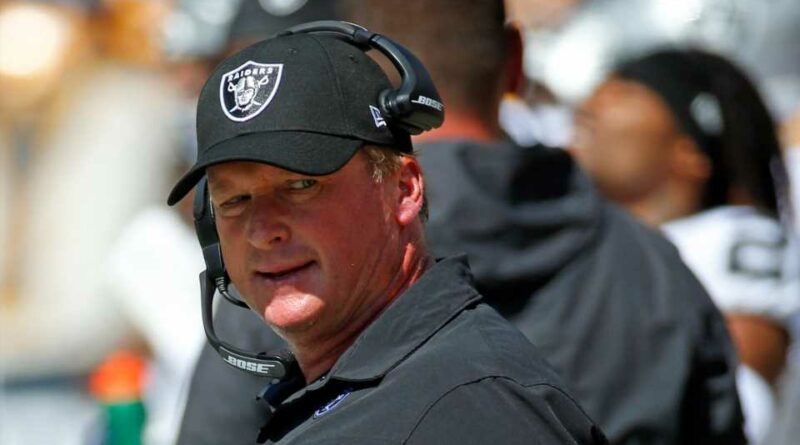 The NFL has uncovered yet more emails involving Raiders coach Jon Gruden from 2010 through 2018 in which he used sexist, homophobic and transphobic language, according to a report from The New York Times.

Shortly after the Times released its report, NFL Network’s Tom Pelissero and ESPN’s Adam Schefter reported that Gruden had informed his team he would resign as head coach. Gruden later released a statement confirming his resignation:

League officials uncovered the emails as part of a workplace misconduct investigation into former Washington Football Team president Bruce Allen. They were not focused specifically on Gruden, who was not in the league at the time. He had already come under fire for using an apparently racist trope against NFL Players Association executive director DeMaurice Smith in a 2011 email to Allen. Gruden at the time was serving as a color analyst on “Monday Night Football.”

Gruden later attempted to walk back those comments, saying he uses the term rubber lips to call someone a liar. He apologized for those comments on Sunday, preceding the leak of further disparaging emails by less than 24 hours.

Here’s everything you need to know about what Gruden said in those emails, and how the Raiders, NFL and NFLPA have responded:

What did Jon Gruden say in emails?

Gruden used racist, sexist, homophobic and transophobic language in the emails, which the Times reports dated from 2010 through 2018, before Gruden was hired by the Raiders for his second stint with the team. Per the Times, he often called NFL commissioner Roger Goodell a “f—t” and a “clueless anti football p—y.” He also used homophobic slurs to describe NFL owners, coaches and reporters who cover the league.

Gruden also reportedly exchanged emails with Allen and others that included photos of women wearing only bikini bottoms. One photo reportedly included two Washington Football Team cheerleaders. Per the Times, Gruden and Allen also sometimes included Ed Droste, the co-founder of Hooters; Jim McVay, an executive who has run the Outback Bowl; and Nick Reader, the founder of PDQ Restaurants, in the emails.

Per the Times, Droste in 2017 shared a sexist meme of a woman refereeing in the NFL, with Gruden replying, “Nice job roger.”

Gruden also criticized larger issues that surfaced in or otherwise had platforms of discussion in the league. For example, he reportedly criticized former President Barack Obama during his 2012 reelection campaign and called then-vice president Joe Biden a “nervous clueless p—y.” Gruden reportedly also denounced the league for attempting to reduce concussions, adding that Eric Reid — who demonstrated during the playing of the national anthem as a form of protest against police brutality — should be fired.

In 2015, Gruden condemned a congressional bill that attempted to force Washington to change its name from the Redskins, which many Native Americans view as a slur. Gruden received a link, also that year, detailing how players wanted Goodell to support them in efforts to promote racial equality and criminal justice reform.

“He needs to hide in his concussion protocol tent,” Gruden said.

Gruden also singled out individuals as targets of his hateful language. That includes Caitlyn Jenner, whom Gruden mocked when she won an award in 2015 after transitioning. He also asked Allen to tell Bryan Glazer, whose family owns the Buccaneers, to perform oral sex on him. Allen reportedly responded that Glazer would “take you up on that offer.” Gruden coached Tampa Bay from 2002 through 2008.

Gruden also targeted Michael Sam, who came out as gay before attempting an NFL career, and Smith.

Per the Times, Gruden criticized Goodell for pressuring former St. Louis Rams coach Jeff Fisher to draft “q—rs.” That was a reference to Sam, who came out as gay ahead of the 2014 NFL Draft and was selected with the Rams’ second-to-last pick in the seventh round. He spent the 2014 season on St. Louis and Dallas’ practice squads, later spending a year in the CFL with the Montreal Alouettes.

Prior to his resignation, Gruden coached the NFL’s first openly gay active player, Carl Nassib, who came out ahead of the 2021 season.

The email that initially got Gruden in hot water was a 2011 email to Allen in which he used a racist trope to describe Smith:

“Dumboriss Smith has lips the size of michellin (sic) tires.”

Gruden, perhaps in an attempt to soften the comments he hurled at Smith, told ESPN on Friday that the NFLPA executive director wasn’t the only person he insulted in 2011 during labor disputes that led to a lockout: He said he also insulted Goodell:

“I was in a bad frame of mind at the time (in 2011), and I called Roger Goodell a (expletive) in one of these emails too,” he told ESPN. “They were keeping players and coaches from doing what they love with a lockout. There also were a lot of things being reported publicly about the safety of the sport that I love. I was on a mission with high school football (in the Tampa, Fla., area) during that time, and there were a lot of parents who were scared about letting their kids play football. It just didn’t sit well with me.”

Gruden, speaking separately to The Athletic, said he didn’t remember the specifics of the email to Allen, and that he uses the term “rubber lips” to describe someone as a liar (a possible explanation for his comment on the size of Smith’s lips). He added that he is not racist but that his comments went too far and that he would take responsibility for them.

“I do know this, at that point of my life, 11 years ago or 10 years ago, I am sure I vented a little bit with my friends about certain things,” Gruden told The Athletic on Friday after the email became public.

I know at that time the Collective Bargaining Agreement was changing, there was a lockout going on or the threat of a lockout, if I can remember. I probably looked at (Smith) as the villain. And I was really upset. I was really upset that there was going to be a lockout. I felt that Gene Upshaw would never have allowed that to happen.

I didn’t feel like we were getting the truth. I refer to guys when I see them lying — and I can tell they’re lying — I refer to them as ‘rubber lips.’ I went too far calling him the Michelin lips. I never had a blade of racism in me. I was just pissed and used a terrible way to insult a guy.

I called (Smith), I have reached out to him and I haven’t heard back from him yet, but I will continue to try.”

What Raiders, NFL have said in response to Gruden emails

“The content of an email regarding DeMaurice Smith from Jon Gruden when he worked for ESPN 10 years ago is disturbing and not what the Raiders stand for. We were first made aware of the email late yesterday by a reporter and are reviewing it along with other materials provided to us today by the NFL. We are addressing the matter with Coach Gruden and will have no further comment at this time.” (via Twitter)

“The email from Jon Gruden denigrating DeMaurice Smith is appalling, abhorrent and wholly contrary to the NFL’s values. We condemn the statement and regret any harm that its publication may inflict on Mr. Smith or anyone else.” (via Wall Street Journal)

“The email from Jon Gruden — and some of the reaction to it — confirms that the fight against racism, racist tropes and intolerance is not over. This is not about an email as much as it is about a pervasive belief by some that people who look like me can be treated as less. The email has also revealed why the comments by some with powerful platforms to explain this away are insidious and hypocritical. It is as if there is a need to protect football above the values of equality, inclusion and respect.

“The powerful in our business have to embrace that football itself has to be better, as opposed to making excuses to maintain the status quo.

“I appreciate that (Gruden) reached out to me (and) I told him that we will connect soon, but make no mistake, the news is not about what is said in our private conversation, but what else is said by people who never thought they would be exposed and how they are going to be held to account.” (via Twitter)