Turns out the winning ticket was purchased in South Carolina, but you can’t blame the second-year receiver for trying.

“I tried to win it so we could get Le’Veon back,” Smith-Schuster told ESPN. “It didn’t work.”

At least someone tried to resolve the contract dispute, and Smith-Schuster earned the honor of teammate of the year with his efforts.

Man @LeVeonBell I did my best for you!!! No luck tho ?? https://t.co/yFmXylmFgm

Bell, who is seeking guaranteed money, remains absent despite reports that he was going to end his holdout and rejoin the team during their Week 7 bye. He has forfeited $6.8 million during his time away from Pittsburgh after being franchise tagged for the second consecutive year this offseason.

Bell won’t play for at least another week but will have to end his holdout before Week 10 in order to accrue an NFL season, which would make him eligible for unrestricted free agency after the 2018 season. The Nov. 13 deadline for him to sign his tender falls during Week 11 when the Steelers are scheduled to visit the Jaguars. 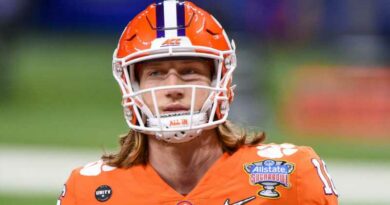 Trevor Lawrence defends comments regarding his work ethic: ‘I love football as much or more than anyone’