On Saturday evening, the NFL released a statement from commissioner Roger Goodell about George Floyd's death and the subsequent protests around the country. He said the league was "greatly saddened by the tragic events" and offered condolences to Floyd's family, while pledging future action on behalf of the league.

"As current events dramatically underscore, there remains much more to do as a country and as a league," Goodell said in the statement.

"Save the (expletive)," Stills wrote in a response on Twitter.

Reid and Stills are among the handful of NFL players who continued to kneel during the national anthem last season, a demonstration first made by quarterback Colin Kaepernick in 2016 as a means of protesting racial inequality and police brutality in the United States. Kaepernick became a free agent in 2017 and has not been signed since.

'STICK TO SPORTS': As America burns amid protests, athletes should have voice

MICHAEL JORDAN ON FLOYD'S DEATH: 'We have had enough'

The protests have been deemed unpatriotic by critics, including president Donald Trump, who used an expletive to describe players who took a knee during the national anthem during a 2017 speech. NFL owners later voted to require that players stand during the anthem or remain in the locker room, while threatening punishment for those who kneeled.

The NFL has since made efforts to support social justice initiatives, including the creation of an "Inspire Change" campaign and a partnership with rapper Jay-Z. But those efforts have been criticized by some players, including Reid, as disingenuous.

"I’m looking forward to 'Songs of the Season 2.0,'" Reid wrote on Twitter on Saturday, referring to an NFL initiative in which the league released songs and donated proceeds to social justice initiatives.

Reid, who was the first player to kneel during the national anthem alongside Kaepernick, also took issue with a statement over the weekend from San Francisco 49ers owner Jed York, who announced that the 49ers would be donating $1 million to "local and national organizations who are creating change." 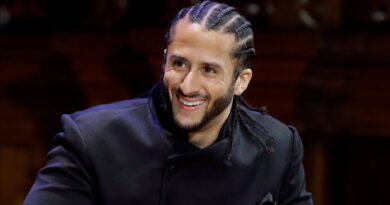