Home » NFL » Kiszla: In spring without sports, dogs saves us from going crazy

We’ve learned to endure a spring without balls and strikes, Nikola Jokic dropping dimes so sweet they feel like a million bucks, the feel of our skis carving corn snow. As coronavirus has stolen the joy of sports, what has filled the void?

At a time when this pandemic has us under house arrest, dogs serve as our get-out-of-jail-free card, the wagging tail lifting our spirits and entertainment way more compelling than a televised game of H-O-R-S-E.

Offensive lineman Graham Glasgow recently signed a $44 million contract as a free agent with the Broncos, which is cool. But, these days, that big stack of cash is not as valuable to Glasgow and his wife as Gordy.

“He’s awesome. He’s part of the family. In our eyes, he’s basically our son. I even call him that,” Glasgow told me.

Gordy is half Lab, half Golden Doodle and 100% effective in the prevention of stir-crazy.

“He’s not well enough trained to be a service dog,” Glasgow said. “But he’s therapeutic to me.”

Any dog-lover is all right by me. Glasgow wanted a canine companion so badly he took allergy shots for two years to make him more suitable to be dog’s best friend.

Among the fondest memories of Glasgow’s youth were long summer days on a Wisconsin lake, site of a boat house that served juicy burgers and frosty ice cream. “It was named Gordy’s. First time I got a chance to use the name, I did,” recalled Glasgow, who regularly jogs with his dog so neither of them gain 15 pounds while cooped up during the pandemic

Denver is a Broncos town, and silly arguments about the NFL draft keep us sane. But if Gov. Jared Polis won’t make an official proclamation, I’m going to defy orders to stay out of the high country and shout it from Mt. Evans: The official symbol of Colorado is not our “Sunny C” flag, so much as a mud-caked Subaru with a Golden Retriever riding shotgun, sticking his snout out the window.

“I’m that guy,” said Kyle Freeland, Rockies pitcher and Denver native. He proudly admits the back seat of his SUV is frequently covered in the hair of Benny and Kona, his pups.

Unable to pitch against major-league hitters until further notice, Freeland throws at an appropriate social distance with teammate Jeff Hoffman in Arizona. But a workout can kill only so many hours of boredom in a day. So Freeland goes to the backyard for a catch with Benny, which is exactly what he was doing when he explained to me by telephone how a guy stays happy while baseball decides if it can play a season with teams in quarantine.

Take me out to the ballgame? Precautions against COVID-19 prevent CBS4 anchor Michael Spencer from going to the studio for his sportscast. While I figure draconian measures are worthwhile to stay out the same room as Jim Benemann, turning the living room of a small condo into a TV set has been a hassle for Spencer.

“I can’t recline on my couch without breaking down the (camera) sticks,” Spencer said.

In the absence of new Nolan Arenado home runs, the coolest highlight of any recent sportscast was a wagging tail that motored through a recent Zoom interview Spencer did with Rockies infielder Ryan McMahon.

The tail was attached to Winnie, a 7-month-old pup who rules the Spencer household. Winnie has a face for television, but is often just out of camera range, curled at Spencer’s feet, as he delivers sports news without scores to Channel 4’s audience.

“Winnie has a tendency to grab a toy immediately before I go on the air,” said Spencer, chuckling at his new normal. “So I’m holding my breath during the whole broadcast, hoping she doesn’t start chewing on the toy and squeaking it.”

My old friend Rex Chapman is a former NBA player, as well as a front-office exec who helped build the Nuggets team that advanced to the Western Conference finals in 2009. But Chapman has become an internet sensation in 2020, by posting hilarious, slice-of-life videos that have replaced SportsCenter’s Top 10 for me, as well as earning him more than 650,000 followers on Twitter.

“I’m not Mr. Feelgood, I’m Mr. Snarky,” Chapman said Tuesday, in an interview with Altitude Radio. The viral videos, he added, “help me find some good” in a world where it’s easy to get down and bummed out.

If you ask me, Chapman’s best work are videos labeled: Dogs, bruh.

Atop his Twitter feed right now, there’s 13 seconds of pure athletic genius, as beautiful as any Nathan MacKinnon goal. It’s of a man and his dog, both on skateboards, gliding through an empty parking lot, playing a game of their own invention together, in the time of coronavirus.

I can live without sports. But without Fred, my dog?

“Dogs,” Spencer said, “provide the sanity and levity we need in the new normal. They remind us not everything is terrible in the world.” 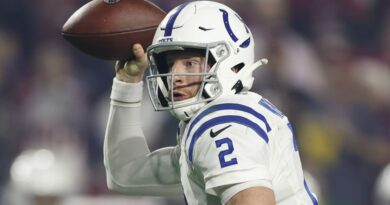