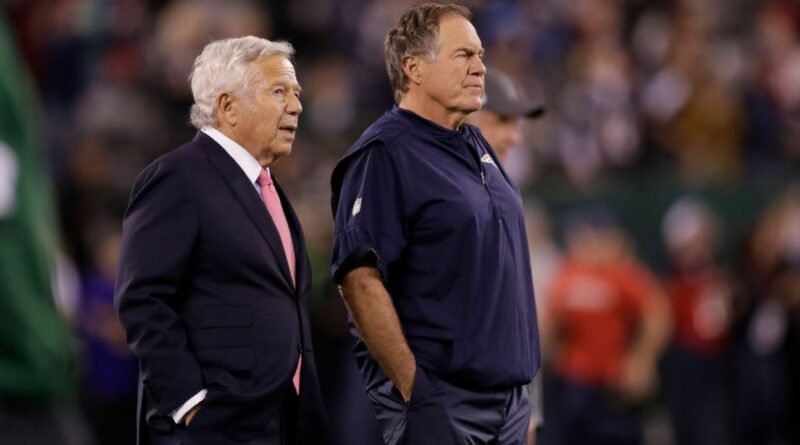 “In the end, if you want to have a good, consistent, winning football team, you can’t do it in free agency. You have to do it through the draft. I don’t feel we’ve done the greatest job the last few years and I really hope, and I believe, I’ve seen a different approach this year,” Kraft said Wednesday in his annual Q&A with reporters during the NFL’s owners meeting.

The Patriots, who finished 7-9 and missed the playoffs for the first time since 2008, have 10 picks in this year’s draft (April 29-May 1). Their top selection is 15th overall, which will be their highest pick since tabbing linebacker Jerod Mayo 10th overall in 2008.

Their free-agent spending spree, which Kraft explained was strategic in terms of how quickly the team moved with limited competition from other teams due to the declining salary cap, was necessary to fill some holes that would have ideally been filled by draft picks.

“What happened here last year was not something to our liking. We had to make the corrections,” Kraft said. “In all the businesses we’re involved in, we try to take advantage of inefficiencies in the market. We were in a unique cap situation this year and it allowed us to try to (fix) things we missed, to a certain extent, in the draft. So this was our best opportunity. …

“In the end, it all comes out to what happens on the field and how well people execute. You really don’t know how good a draft is for at least two years, especially in the environment we’re in now … I’m not quite sure still now what our offseason training and learning abilities will be. I think last year younger players were really disadvantaged because they didn’t have the time to learn.”

Kraft said that also applied, in part, to quarterback Cam Newton after he joined the Patriots in early July without the benefit of an offseason. So while Kraft said that the team still needs to solidify the quarterback position, he’s not ruling out Newton being the answer in 2021 and possibly beyond.

“In fairness to Cam, I’m not sure he had the proper weapons around him last year,” Kraft said, before noting Newton’s strong start in 2020 before his momentum was stunted after testing positive for COVID-19 in early October. “I really do believe Cam getting COVID, and what it did to the team, it changed a lot. Now we’ll get a chance to see.

“Players on the team, in the locker room, really love the guy. In the end, I trust Coach Belichick’s ability to build a team, and put the right players in the best position to succeed.”

At the same time, Kraft noted that 2019 fourth-round Jarrett Stidham is still a possibility to emerge, praising his initiative to arrange throwing sessions last week with teammates in Southern California.

“I don’t know that Jarrett has ever really gotten a fair shot,” Kraft said. “We have to wait and see what happens, and we still have the draft. … Quarterback is the most important position on the team. One way or the other, we have to get that position solidified.”

Kraft said the Patriots gave Brady the ability to depart, by forgoing the opportunity to assign him the franchise tag, and he has no regrets doing so.

“After 20 years, I’ll make this commitment to any player in the future. Anyone who spends 20 years with us, and helps us go to win six Super Bowls, we’re not going to keep; look, we could have contract-wise, kept him in our camp. But it’s not the right thing,” he said.

This was the first time Kraft answered questions from reporters since the end of the season, and asked how he felt about the 7-9 campaign, he said: “After my family, the Patriots are the most important thing in my life. The bottom line here is winning. That’s what this business is, and when we don’t, it’s not a good feeling.”

What next for New England Patriots after Wild Card defeat to Tennessee Titans?