OWINGS MILLS, Md. — Why is the once high-scoring Baltimore Ravens offense struggling this season? Lamar Jackson says the Ravens are too predictable on offense.

On Wednesday’s “Rich Eisen Show,” the quarterback said teams know what the Ravens are going to run on offense when they line up.

“They’re calling out our plays, stuff like that,” Jackson said. “They know what we’re doing. Sometimes stuff won’t go our way if they’re beating us to the punch.”

Is Jackson really hearing the defense call out the Ravens’ plays?

“Yeah, they definitely do,” Jackson said. “Like, ‘run’ and stuff like that. ‘Watch out for this, watch out for that.’ Sometimes that’s what’s going on.”

Defenses have commented how deliberate the Ravens have been on offense this year.

Two weeks ago, Pittsburgh Steelers linebacker Alex Highsmith said he was tipped off before making his third-quarter interception of Jackson.

“I knew when that play started they were coming back to that because they ran the same play on the first half, and I didn’t drop deep enough,” Highsmith said after Pittsburgh’s 28-24 victory over Baltimore. “So I learned from that play and just dropped deeper. … the ball just fell into my hands.”

The Ravens (6-2) have positioned themselves to make the playoffs for a third straight season, but Baltimore has not clicked on offense as it did a year ago despite having the same players and coaches. Offensive coordinator Greg Roman is back, as is every offensive starter except Pro Bowl guard Marshal Yanda, who retired.

Baltimore has been a run-first offense with mixed results. The Ravens have called a run play on 64% of their first downs, the second-highest rate in the NFL behind the Browns (65.1%), according to ESPN Stats & Information. But Baltimore, the NFL’s No. 1 rushing team, ranks 21st in yards per carry (3.9) on first down.

Jackson doesn’t know how to rate his season so far.

“We had our ups that first week and then we had our downs,” said Jackson, who ranks 27th in the NFL with 1,513 passing yards. “Usually we’re a high-level offense. But it’s been all right. It’s not where we want to be. We’re still winning, so it’s all right, I guess.” 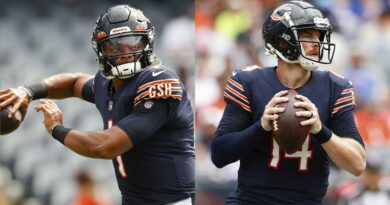