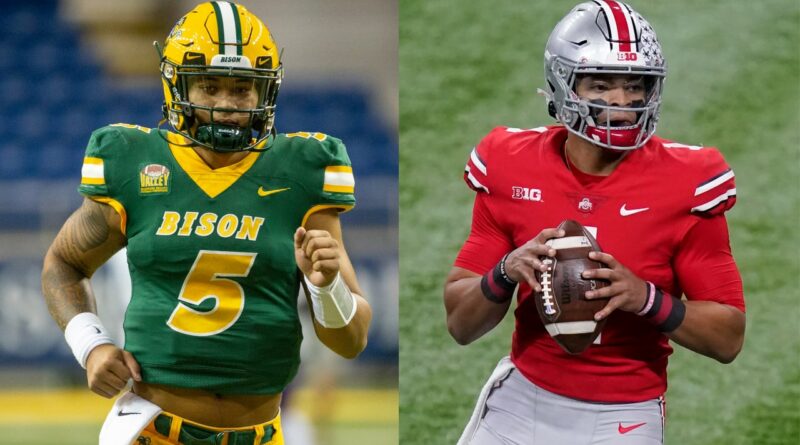 In my first mock of the 2021 NFL Draft, which is scheduled for April 29 – May 1, I have quarterbacks going first and second overall — something we haven’t seen since ﻿Jared Goff﻿ and ﻿Carson Wentz﻿ were taken with the top two picks in the 2016 draft. Remember, this mock is a projection of where I believe players will go — not necessarily a reflection of my opinion as to where the players should go.

Note: The order of the final two spots below will be determined by the outcome of Super Bowl LV (the Buccaneers and Chiefs are ordered in this mock based on regular-season record).

This pick should be set in stone as the Jaguars hit reset with a brand new face of the franchise.

If the Jets don’t love a quarterback in this spot, it will make sense to see if there are any takers for a trade. If there aren’t, starting over at QB would make sense. Wilson has significant arm talent.

PICK ACQUIRED FROM THE HOUSTON TEXANS

It is imperative for the Dolphins to add a playmaker to pair with Tua Tagovailoa and give the offense some much-needed explosiveness.

Surtain is a big, long, fast cornerback with the ability to mirror and match pass routes. He can strangle the catch point and is exactly what the Falcons need as a top-tier CB1.

I understand the Bengals need offensive line help, but they also have the 38th overall pick and loads of cap space to address that area. Pitts has a chance to be a generational talent and a relentless nightmare for opposing defenses.

Parsons, who opted out of the 2020 season due to the pandemic, is scary talented with outstanding body composition, rare speed and excellent open-field tackling ability. He’ll help tighten up the Eagles’ porous linebacker corps.

The Lions could go in a number of directions here, including cornerback or linebacker, but with almost an entire receiving corps set to hit free agency, Chase could serve as a splashy WR1 for their new QB.

While some believe Oregon’s Penei Sewell has the higher potential upside, Slater is a low-risk, high-yield lineman who has five-position flexibility up front, a great deal of play strength and pro polish to his game.

﻿﻿My guess is that we may see the Broncos address linebacker and maybe pass rush in free agency, which would give them the opening to add a big, talented CB like Farley to contend with the division’s explosive, young QBs.

﻿﻿Tyron Smith turned 30 in December and hasn’t played 14 or more games in a season since 2015. Sewell could give the Cowboys flexibility up front, playing either right tackle or guard until it’s time to take over on the left edge for the seven-time Pro Bowler.

Finding another weapon for Daniel Jones is essential, and Waddle has game-breaking explosiveness on all three levels of the field with an ability to back safeties off the line of scrimmage for Saquon Barkley﻿.

Lance could go higher with a run on quarterbacks. If he’s available at 12th overall, he might be too enticing to pass up. His background and skill set fit perfectly within Kyle Shanahan’s offense.﻿﻿﻿﻿﻿﻿﻿

﻿﻿While he he plays with low-burn energy at times, Darrisaw’s tape can be like watching a young Russell Okung, and that is exactly what the Chargers need.

﻿One of the most surprising developments from the 2020 college season was Vera-Tucker’s play at left tackle after transitioning from guard. Needless to say, he’ll offer guard/tackle flexibility at the next level and would be an instant upgrade on the Vikings’ O-line.

It’s hard to project where the QBs will land this year, as I expect grades to vary greatly by team. But Fields is a talented quarterback with big-game experience who will have a chance to compete for snaps immediately in New England.

Finding an impactful defender up front should be one of the Cardinals’ priorities. Ojulari is twitchy and powerful and has a game that should translate well in the NFL.

﻿﻿﻿The Notre Dame product is one of the most exciting defenders in this draft class. He’s athletic and sticky in coverage, while possessing blazing pursuit speed and scary pass-rush potential.

﻿﻿﻿With just one full year of tape to his name and a good chunk of his sack production coming from an inside alignment, Rousseau might be a bit of a risk. But he is very long and has traits that GM Chris Grier and coach Brian Flores should love.

This is a tough pick to project, as many of the elite position players at areas of need will be gone. Fortunately for Washington, Moore is flying well under the radar. He’s a very consistent, high-volume slot receiver with excellent hands and toughness.

﻿﻿﻿Jenkins is a rock-steady tackle with experience on both sides of the line, though he’ll likely line up at right tackle in the NFL. He plays with a nasty demeanor and has excellent hand and core strength.

The Colts could go with a cornerback here, but they covet elite length and explosiveness off the edge. Oweh might be too tempting to pass on despite his need for pass-rush polish.

Finding a pass rusher is critical for the Titans’ future success. Paye has a rare combination of size (6-foot-4, 272 pounds) and short-area quickness that, with a more focused rush plan, could cause O-linemen fits at the next level.

PICK ACQUIRED FROM THE SEATTLE SEAHAWKS

﻿﻿A three-down rusher with a winning background, Etienne runs with great urgency and competitiveness. Improving the ground game could have a huge impact on the success of a young QB, if the Jets do indeed take a passer at No. 2 overall.

The Steelers need a running back, but GM Kevin Colbert doesn’t draft RBs this early. He does, however, seem to love taking linebackers in Round 1, and Collins’ rare combination of size, range and coverage will be appealing.

﻿﻿﻿﻿The son of former NFL receiver Joe Horn, Jaycee has prototypical size (6-1, 200) and length. He’s best in press coverage, but has the eye discipline and athleticism to play in any scheme.

﻿﻿The Browns need help in the secondary, but adding a talented interior rusher with the ability to play the run is a worthwhile choice.

Moehrig is a ball-hawking safety who would represent an immediate upgrade in the Ravens’ back end. He can play high, low or over the slot, which only increases his value.

Campbell, a former high school sprint champ, has outstanding length and long speed and exciting upside, but might need some time to gain the polish required to cover in the NFL.

﻿﻿This could be a perfect fit thanks to Dickerson’s ability to play guard or center. However, the number of career injuries are mounting (suffered season-ending ligament damage in December), and his medicals will be a focus. Great leader and great fit if healthy.

﻿﻿﻿﻿﻿﻿The Bills took a big step forward in 2020, but they need more balance in their offense. The physical three-down runner with talent as a receiver out of the backfield could immediately upgrade not just the running game but the offense overall.

A long-limbed edge rusher with exciting athletic talent and size, Phillips would help bolster a Bucs pass rush that could lose Shaq Barrett and Ndamukong Suh to free agency. Due to a lengthy injury history, his medical reports will garner plenty of attention.

Adept in press-man and zone coverages, Newsome is a long outside corner. He has the ability to tilt contested catches in his favor on both short and deep passes.﻿﻿﻿﻿﻿

State of the Franchise: Big changes give Broncos reason to hope