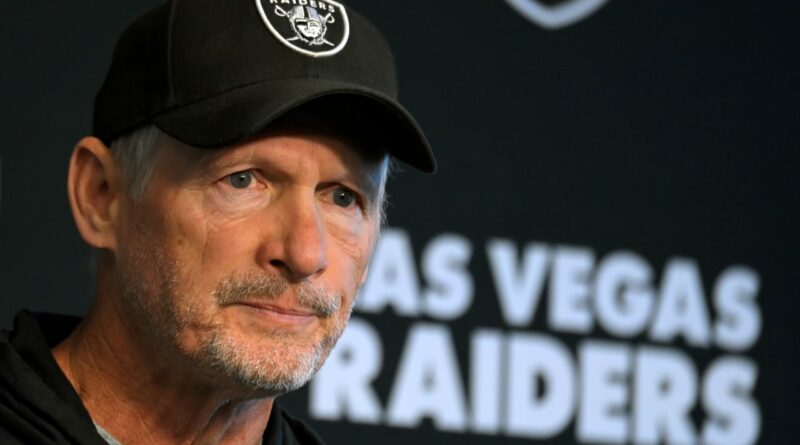 HENDERSON, Nev. — Jon Gruden’s resignation as Raiders coach Monday over toxic emails didn’t just leave a stench behind — it also left collateral damage that was hard for general manager Mike Mayock to explain Wednesday, and perhaps even harder for some people with the team to stomach.

“Every player that I’ve talked to, the reaction has been, ‘Look, we’re all in. We’ve been all in,’ ” Mayock said candidly in a news conference, days after The Wall Street Journal and The New York Times reported Gruden used racist, misogynistic and homophobic language in a series of emails sent to Bruce Allen over several years, when Allen was an executive with the Washington Football Team. “What I said to the players this morning is that there’s a spectrum of opinions out there about Jon Gruden, from total condemnation to full empathy, OK, and everything in between.”

Raiders defensive end Carl Nassib, who came out as the NFL’s first openly gay active player this summer, asked for and received a day off to process things, Mayock said. Though Mayock didn’t explicitly say Nassib’s request dealt with the report of Gruden’s homophobic language, the GM did say the team would offer any support players may need to get through this.

“He’s pretty much a lone wolf when it comes to that,” tight end Darren Waller said of Nassib. “Nobody should be able to tell him how to feel. … I can’t imagine what he must be feeling.”

Waller said that he was disappointed by the email in which, per a Friday report by the Wall Street Journal, Gruden said NFL Players Association executive director DeMaurice Smith had “lips the size of michellin (sic) tires.” Waller said he felt the racist undertones of that email. He was also thinking of ways to offer Gruden “grace,” and that he tried to understand Gruden’s explanation. Ultimately, though, he and the team had to quickly turn their attention to their upcoming contest against the Bears, what ended up being a Week 5 defeat in which they looked flat and lost.

While much of the focus Wednesday was on how the team, players and coaches would re-direct for the rest of the season, there is more to wrestle with when it comes to the Raiders and the people who work for this organization, which was built on standards of inclusion, diversity and equality that the NFL as a whole has yet to catch up on.

Owner Mark Davis is beyond hurt by what Gruden — who signed a 10-year, $100 million contract in 2018 — said in the emails, according to multiple employees. Davis and others in the organization are also unhappy that, as they see it, they are bearing the brunt of a scandal that began with the NFL’s investigation into allegations of workplace misconduct and sexual harassment within the Washington Football Team. Yes, Davis hired Gruden to coach the Raiders, but some within the organization question why, of the 650,000 emails in total that were part of the investigation, Gruden’s were the only ones to be leaked. And why were those emails, sent to Allen over a seven-year period before Gruden began his most recent stint with the team, leaked now?

Beyond those questions, there is so much to get over and get through.

“A lot of emotions, obviously,” quarterback Derek Carr said. “Didn’t see all of this coming. I don’t think any of us did. It caught us all by surprise. … From an emotional standpoint, I got a job to do … no matter who the coach is.”

The coach in question is former special teams coordinator Rich Bisaccia, whose dream opportunity as the interim leader of the Raiders comes amid one of the biggest recent controversies in sports, with a team that dropped to within one game of .500 after losing two straight.

Bisaccia, who said earlier in his news conference that he is “still a friend of Coach Gruden’s,” said “no one wants to be a head coach in this particular situation, no one wants to be put in front of this under these particular circumstances. But it’s an incredible opportunity, certainly, not only for me but all the other coaches that are here to see what we can do with this adversity, see what we can do with this challenge … and the same thing for our players.”

The reviews on Bisaccia’s lengthy body of work as a coaching assistant (he’s in his 20th NFL season and fourth with the Raiders) have been positive. Moreover, he is known as a top-quality person with no personal agendas. Example 1A seemed to come on his first day as the head coach. He opened practice working with kickers and punters, as usual. That must have shown players Bisaccia’s ego did not grow with this unforeseen opportunity.

As Mayock and others pointed out, this is uncharted turf. Most in-season coaching changes take place when a team has sunk into top-five draft position and there are three or four games remaining. The Raiders, on the other hand, have a big game at Denver, with whom they are tied for second in the AFC West, on Sunday. The majority of Las Vegas’ season remains ahead. The team can still earn a playoff berth and a write script of perseverance — or come undone after the unimaginable downfall of their former head coach.

“I hate to make this sound brusque in any way, but I know the human-interest element here,” Mayock said. “I understand all the concerns from all the different constituencies. I get it. But at the end of the day, our jobs are to win football games, and we’ve got to get our focus back there. And that might sound cold and it might sound calculating, but at the end of the day, that’s our job.”