Home » NFL » Le’Veon Bell landing spots: Ranking all 32 teams based on whether they should trade for the RB

Le’Veon Bell remains missing in action. The Steelers all-world running back skipped training camp and preseason, just like he did a year ago, and then went rogue and was a no-show for the Week 1 opener. He’s remained on his couch ever since. There was some speculation that he might show up last week — it was the Steelers’ bye — and now it’s more likely he’ll make an appearance after next Tuesday’s trade deadline.

Because Bell, who will be a free agent in the spring — assuming he shows up before Week 11 — wants to chose where he plays next. If he’s traded, it would be out of his control. But who knows; a lot can change between now and next week, especially if the money Bell is looking for — which could be in the $17 million a year stratosphere — magically becomes available from a running back-needy team.

So who might those teams be? We’ve ranked them from least likely to most likely below. Let’s get to it.

The Ravens would welcome Bell; Alex Collins is averaging 3.6 yards per carry and Buck Allen is at 2.6. And while they have combined for 39 receptions through seven games, Bell had 160 combined in 2016 and 2017. But there’s no way the Steelers would trade Bell to their most hated rivals. They’d be more likely to give him to the Patriots for a Bill Belichick game-worn hoodie.

Bell would be unstoppable in New England’s offense, which would feature James White, Julian Edelman, Josh Gordon, Rob Gronkowski and, of course, Tom Brady. We don’t even know if the Steelers would make this trade if Belichick included two first-round picks.

The Chiefs currently have the NFL’s top passing game to go along with a the fourth-best running attack. Lord help the rest of the league if they added Bell. It would also mean Kansas City wouldn’t have to worry about fixing its leaky defense because the team would be dropping 50-burgers every week on opponents helpless to do anything about it.

Alvin Kamara, Mark Ingram and even Taysom Hill are three reasons why the Saints don’t need Bell. They also have just one pick in the first four rounds of next year’s draft, thanks to trading up for Marcus Davenport and trading for Teddy Bridgewater and Eli Apple.

Much like the Chiefs and Saints, this wouldn’t even be fair to the rest of the league. We can’t even wrap our brains around the new and exciting ways Sean McVay would use Bell on an offense that already features the NFL’s best rushing attack, according to Football Outsiders’ metrics.

Matt Nagy loves Tarik Cohen and for good reason. And if Jordan Howard has seen his workload lightened as a result, we’re not sure where Bell would fit in. Plus, the Bears have only $5.4 million in cap space, according to Spotrac.

The Bengals have Joe Mixon and Gio Bernard so they don’t need Bell. But perhaps he could help Cincy finally beat Pittsburgh, something it hasn’t done in seven straight games now.

There’s a chance this happens, albeit slight at this point in the proceedings. Pittsburgh would love to trade Bell but short of that seem content to let him walk in free agency, get a third-round compensatory pick, and roll with James Conner in 2019 and beyond.

Melvin Gordon is a top-10 back and Austin Ekeler is averaging 5.8 yards per carry. They’ve also combined for 49 receptions and six receiving touchdowns.

The Cardinals already have their Bell in David Johnson though it might be morbidly curious to see how coach Steve Wilks could transform two of the league’s most dynamic backs into replacement-level talents.

Dak Prescott can use all the help he can get but there’s no way the Cowboys are paying Ezekiel Elliott and Bell to share carries in the backfield.

Kerryon Johnson is ranked first in value per play among all running backs and we know what happened the last time LeGarrette Blount and Bell were on the same team.

The Giants have needs just about everywhere but running back after taking Saquon Barkley with the No.  2 pick in last year’s draft. And while we’re guessing coach Pat Shurmur could find plenty of ways to incorporate Bell into the offense, finding a quarterback is the much more obvious need.

It’s easy to overlook the Broncos’ rushing attack because Case Keenum and the passing has been so bad. But the unit ranks No. 3 thanks to rookies Phillip Lindsay and Royce Freeman. Bell could also help in the passing game where Lindsay and Freeman have combined for just 19 receptions.

On paper, the Titans’ running attack should look a lot like the Panthers. In reality, this group ranks 23rd, even with Marcus Mariota, Derrick Henry and Dion Lewis. We say keep trying till you get it right.

The Bills have LeSean McCoy, who left last Sunday’s game with a head injury. But even when he’s healthy, there’s plenty of room for Bell. The offense is one-dimensional with McCoy, and zero-dimensional without him. Bell and McCoy would be the two best pass catchers on the roster, and while this team is a lost cause for 2018, they could use the offseason to retool.

Can you even imagine? The running game starts with Cam Newton, but if the Panthers want their franchise quarterback to take fewer hits while lightening the load for Christian McCaffrey, no one is more perfectly suited for that role than Bell. We’re not sure the last time two running backs led the team in catches but Newton’s two favorite passing targets could be McCaffrey (who currently has a team-best 40 receptions) and Bell.

The Redskins’ season was supposed to be circling the drain the moment rookie Derrius Guice suffered an ACL injury. Instead, 33-year-old Adrian Peterson has been fantastic. Still, Bell provides Washington some much-needed help in the passing game, not to mention his obvious talents when carrying the ball.

Thirty-five-year-old Frank Gore might play forever but Kenyan Drake currently ranks 26th in value per play, according to Football Outsiders. Given Ryan Tannehill’s struggles before the injury, and that Brock Osweiler is filling in (admirably, by the way), a balanced offense featuring Bell would make Adam Gase’s offense a lot more effective.

Who knows when Leonard Fournette will be 100 percent healthy? This explains why the Jags traded for Carlos Hyde, who is a nice player but not in the same conversation with Bell, who could go a long way in making us forgot just how mediocre Blake Bortles has been this season.

Cleveland has plenty of playmakers but when you have three wins in 2.5 seasons, nothing should be off the table. The Browns almost certainly won’t acquire Bell since they just shipped Carlos Hyde to Jacksonville so they could feature rookie Nick Chubb more frequently. Still, that doesn’t mean they shouldn’t look into it, especially with the need for pass catchers now that Josh Gordon is in New England.

Green Bay’s running game has been really good through the first half of the season — the group is averaging 4.7 yards per carry — but imagine this offense with Davante Adams, Jimmy Graham, Aaron Rodgers and Bell. Unfortunately, the Packers only have about $3.3 million in available cap space.

Yes, the Seahawks used a first-round pick on running back Rashaad Penny but he’s currently third in a three-man rotation. Bell would be the go-to back, the third-best receiver and another competent blocker to help protect Russell Wilson.

The Colts have the 24th-ranked rushing offense and a playmaker like Bell would give the Colts their best QB-RB tandem since Peyton Manning and Edgerrin James.

The Jets have the 28th-ranked rushing offense and there is no better friend for a rookie quarterback than a stout running game. Unless New York is facing Denver every week, Bell makes a ton of sense.

Flush with five first-round picks over the next two years and obvious and pressing needs up and down the roster, including in the backfield where Marshawn Lynch just landed on injured reserve, Bell would be a god send for embattled Derek Carr, who is coming off one of his worst games as a professional. Oakland has more than $9 million in cap space.

Deshaun Watson has looked much better after a rusty start to the season but good heavens, has he taken a beating behind this offensive line. Houston’s running game ranked 29th heading into Week 7 and Bell would give the passing game another legit target after DeAndre Hopkins and Will Fuller.

Yes, the Falcons have Devonta Freeman on the roster and he’s in the second year of a five-year, $41 million deal. But here’s the thing: He’s not the same impact player that Bell is, and he’s currently on injured reserve with a knee injury. And while Atlanta can’t fix its offensive line in the next week, adding Bell would make life immeasurably easier for Matt Ryan.

The Vikings are near the bottom of the league in available cap room but with the defense improving, the passing offense coming together with Kirk Cousins, and Dalvin Cook continuing to struggle with a hamstring injury, Bell could be the piece that puts this team over the top in the division and positions them as one of the few teams that could challenge the Rams in the NFC.

Yes, the Buccaneers drafted rookie Ronald Jones in the second round but he’s only managed 17 carries this season behind Peyton Barber. The Bucs don’t have much in the way of cap room but with the 31st-ranked running game they could find a way to make Bell’s new deal work.

San Francisco lost Jerick McKinnon before the season and has been replacement-level in the run game (15th overall). McKinnon signed a four-year, $30 million deal before the season but the 49ers can get out from under it for only $2 million in dead cap space next offseason so they can easily afford to add Bell. Matt Breida, who  has taken on most of the workload in McKinnon’s absence, is battling through injuries and is probably better-suited as a change-of-pace back. The 49ers have more than $36 million in cap space.

It’s no secret the Eagles have been in the market for a running back, especially after losing Jay Ajayi for the season. The team has been in contact about both Bell and LeSean McCoy, according to CBS Sports NFL Insider Jason La Canfora, though Philly could also choose to move forward with Corey Clement and Wendell Smallwood. The Eagles have just over $11 million in cap space. 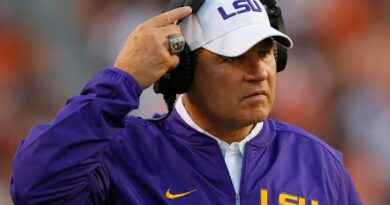