Williams, who was the 12th overall pick in the 2022 draft and fourth wide receiver taken, is now one step closer to taking the field in Sunday’s game against the Jacksonville Jaguars. The Lions moved up 20 spots in the draft to select the Alabama product.

During his junior season at Alabama, he totaled 79 receptions for 1,572 yards and 15 touchdowns. However, Williams tore his ACL in Alabama’s national title game against Georgia.

Williams shared how it felt earlier this week to be part of practice sessions.

“I feel real good,” Williams said, via the team’s website. “Feeling back to myself. I got a chance to get out there and get some routes and run some plays with the team and do a little bit, so I’m feeling really good right now.”

The rookie wideout also detailed how his chemistry with quarterback Jared Goff has been going the last couple days.

“I feel like it’s been coming along really well,” Williams said. “Me and Goff have been talking a lot of, ‘What would happen on this play if I was in? What would this be like?’ I feel like it takes some time, but it’ll be good for sure.”

The Lions will hope for a first glimpse of how their future core with Williams could look on Sunday against the Jaguars.

Elway on Garett Bolles' holding calls: 'It's got to stop' 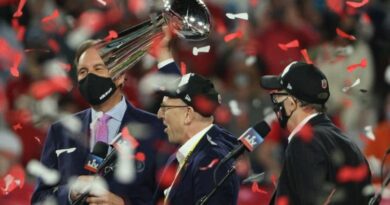