On an evening known for sound bytes and celebration of the impending big game, Super Bowl LIV Opening Night began on a somber note.

A moment of silence for Kobe Bryant — the NBA legend who perished just a day prior along with his daughter, Gianna, and seven others in a Southern California helicopter crash — was held to begin the night with an image of the Lakers icon in the background upon a Jumbotron.

A day later, the legend of Bryant still weighed heavy with Chiefs offering sentiment and appreciation for the all-time great.

Chiefs coach Andy Reid: "It’s sad. I knew Kobe from Philadelphia, and great person, man. I feel bad for his family, sick for his family. They’ll rebound. They’re strong. They’ll live up to his strength."

Chiefs quarterback Patrick Mahomes: "I wasn’t lucky enough to get to meet Kobe. But the impact that he made in my life, it was huge. The way he was able to go about every single day, when I was a kid, and the work ethic and the intensity that he had to be great every single day. Even to this day, I still watch videos on YouTube the day before games and just listen to him talk and how he puts everything in perspective of being great on and off the field with his kids, and his business ventures and then obviously his play. It’s a tragic thing. Prayers to his family, but he made a huge impact in my life for sure.

"I think the biggest thing with Kobe was the mentality that he had. It’s special, and it’s something that I hope that I can show whenever I’m playing."

Chiefs tight end Travis Kelce: "I had an opportunity to meet Kobe and he’s just an unbelievable person. You can’t say enough about who he was and his impact and with that, I just feel bad for the Bryant family, everybody involved out there on the West Coast. My heart’s with you as well as everyone here in America.

Chiefs wide receiver Tyreek Hill: "I feel like I lost a family member. I don’t even know Kobe like that, he’s just a role model to me. And then his kids, his daughter, I have a daughter myself so I can only imagine the feeling. Prayers up for Kobe and his family and the whole [city of L.A.]."

Chiefs pass rusher Terrell Suggs: "I think Shannon Sharpe said it best. We all feel like we lost a relative, like a loved one. Everybody feel like that. Everybody’s just kinda still in shock. I’m speechless. I don’t really know what to say."

Chiefs safety Tyrann Mathieu:"His will to win was nothing I’d ever seen before. I thought I practiced hard but going through YouTube videos and watching Kobe at practice, he was in a complete different element." 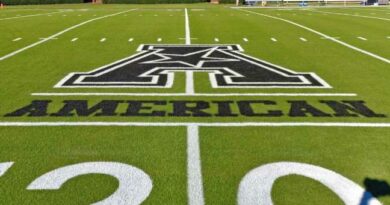 AAC commissioner: No plot to poach from Big 12