And he thinks one quarterback has started to separate himself from the pack thus far this season.

Murray, who won the coveted trophy in December, was asked Wednesday for his thoughts on this year’s Heisman race, which still has about a month to be decided.

“Our guy (Oklahoma quarterback Jalen Hurts) kind of took a hit with that loss,” said Murray, the former Sooners quarterback. “I think right now, if somebody had to win, it’d probably be Joe Burrow.”

Burrow, who’s second in the nation with 2,805 passing yards, leads ESPN’s Heisman Watch with 47 points. Ohio State defensive end Chase Young is second with 32 and Alabama quarterback Tua Tagovailoa is third with 29. Hurts is fourth with 26.

Burrow leads LSU, which debuted second in the first College Football Playoff rankings despite being the AP’s No. 1 team, to Tuscaloosa on Saturday to face Alabama, which is No. 3 in the CFP rankings and second in the AP Top 25.

Burrow has completed 78.8 percent of his passes and averages 10.8 yards per completion. He’s thrown 30 touchdowns against four interceptions while getting sacked 15 times.

Hurts, who transferred from Alabama and replaced Murray as Oklahoma’s starting quarterback, has thrown for 2,469 yards and 21 touchdowns against three interceptions. 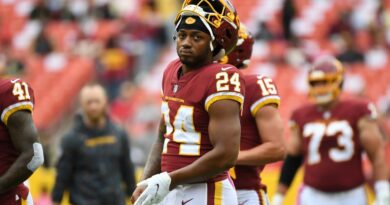 Opinion: Oklahoma State’s Hubbard didn’t have to apologize to Gundy, but it helped push change forward