Matt LaFleur would be open to a Nathaniel Hackett return to Green Bay after the former Packers offensive coordinator was fired by the Denver Broncos last month.

“I think I’ve definitely entertained all that,” LaFleur said Monday after the Packers’ season ended, via ESPN. “I think you can never have enough great coaches, and certainly you guys know how I feel about Nathaniel and the job he did here. But again, just getting started into the evaluation phase. I did talk to him after he got let go in Denver. I know that he needs some family time as well.”

LaFleur noted that the initial talks with Hackett were more about checking in with a fired friend. Hackett spent three seasons as the Packers’ offensive coordinator under LaFleur. That time with Aaron Rodgers helped him get the job in Denver, which lasted just 15 games. If Hackett intends to coach in 2023, a return to Green Bay makes some sense, especially if Rodgers continues his career.

LaFleur called plays when Hackett was in the building and did again after Adam Stenavich took over the OC gig in 2022. LaFleur said he’d consider giving up play-calling if it made sense moving forward.

“As far as the play-calling’s concerned, yeah that’s crossed my mind in terms of I want to do whatever’s best for us to have success,” LaFleur said. “If we feel like that is the best way for us to win games, then I would 100% hand that over.”

As for defensive coordinator Joe Barry — who bore the brunt of fan’s ire in 2022 — it doesn’t sound like LaFleur will be making a change, saying he anticipates the DC to return along with most of the coaching staff.

“I don’t really anticipate a whole lot, if any staff changes at all,” LaFleur said. “Certainly I think there’s a lot of things that all of us can improve upon, most notably myself. But I do believe in the people, not only in the locker room, but our coaching staff. And like I said, are there a lot of things that we’ve got to improve upon? Absolutely. No doubt about it.” 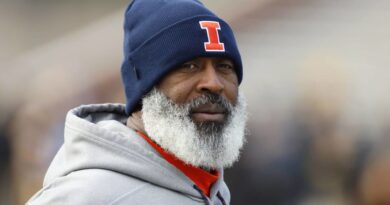