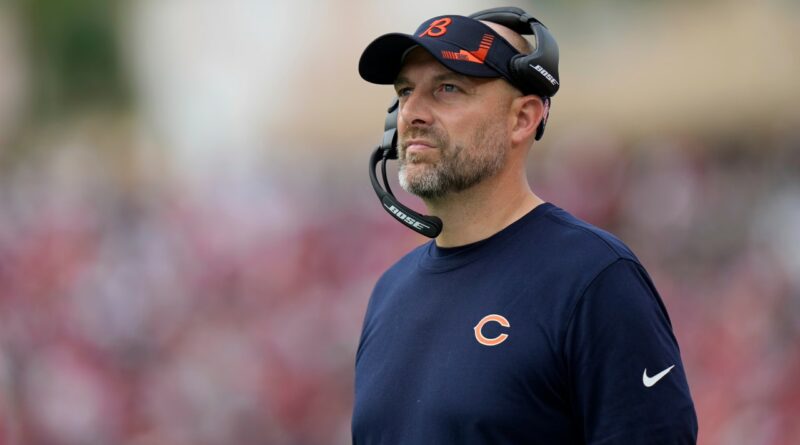 The Chicago Bears haven’t won a game in over a month, and the losing streak might feel all too familiar to coach Matt Nagy.

Last season, the Bears lost four straight, reached and passed the bye week, then lost two more before finally ending their winning drought. Chicago finished 8-8 and snuck into the playoffs, where the Bears lost to the Saints, 21-9.

These Bears could again lose the next two, win out, and finish with eight losses. The only difference would be their win total, which would stand at nine thanks to the NFL’s new 17th game.

Losing before winning is not an ideal plan for the Bears, especially for Nagy, a coach whose seat has been rather warm for some time. The only thing the Bears can control is their preparation for and performance in the next game, which awaits them Sunday at home against the Baltimore Ravens.

The hope is the bye week proves more beneficial than it was in 2020, but the bye alone isn’t enough to suddenly turn Chicago into a winning team.

“Guess what? We had a bye week last year, too,” Nagy said Wednesday. “We lost six games in a row with a bye week stuck in between. The only way to get back to it is say, ‘why is this going on?’ It’s no one’s fault other than everybody’s. And now we pick the pieces up, and we get a chance to play a great football team that’s really well coached at home. And what are we going to do about it?”

There is an important difference between 2020 and 2021, and it exists at quarterback. This time around, the Bears have rookie ﻿Justin Fields﻿, who shined in a comeback attempt that saw the Bears take the lead late in a Monday night game against Pittsburgh before ultimately falling short.

Fields’ improvement has come as the Bears have fielded a more consistent lineup in recent weeks. The dual-threat QB is finally finding himself in somewhat familiar territory as he attempts to navigate an NFL season for the first time in his career, and the confidence gained is starting to spread beyond the man under center.

“I mean it all boils down to confidence and, you know, the more confidence he brings to himself and to the team the more confidence I have, and the more I’m motivated to go out there and do as much as I can to be there for him,” Bears receiver ﻿Darnell Mooney﻿ said Monday, via the Associated Press.

The bye offered Chicago a chance to test some things out, get some needed rest, and work more on the mental side of the game before returning to the field. That should only help Fields as he attempts to lead the Bears out of their current losing streak.

“As we start to see and do our self-scout, we see that he is getting better in a lot of different areas because of the games that he’s getting and the experience that he’s getting,” Nagy said Monday. “So we understand that.

“But that said, we as a team, for instance on offense, we know areas that we need to improve on.”

The improvement will need to be swift if Nagy hopes to keep his job. Another finish near .500 will only keep him around if the Bears show significant improvement and end up in the postseason again, both of which are still possibilities. But they’ll only remain possible if Chicago rights the ship immediately.

With the bye week now in the rear view, there’s no more rest for the weary. There’s only time to start producing before it’s too late.