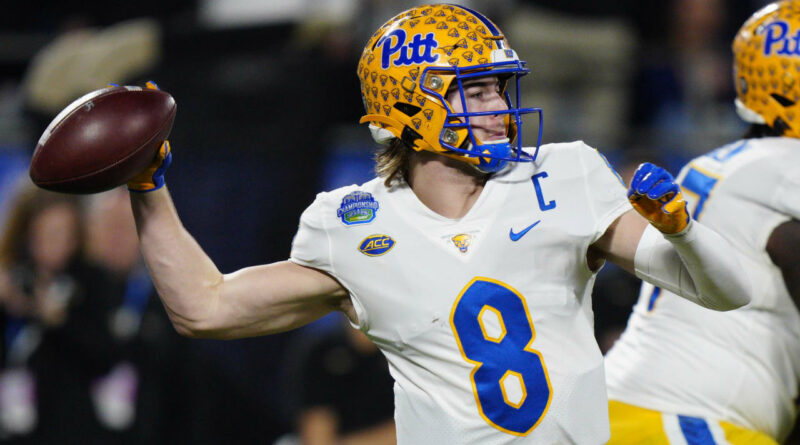 The free agency frenzy and ALL the blockbuster trades have reshaped rosters across the league. How could all of these moves impact Round 1 of the 2022 NFL Draft?

Here’s my first crack at forecasting how the first 32 picks will shake out in Las Vegas on April 28.

With general manager Trent Baalke working to sign Cam Robinson to a long-term deal, the Jags go defense with this pick. Walker is coming off a great combine performance that has the scouting community buzzing, according to my colleague Bucky Brooks. The Georgia product gives the Jags a major boost up front as a versatile defender capable of playing anywhere on the D-line.

There’s no disputing Hutchinson’s talent, but what scares me is that he only produced big numbers in his final year at Michigan. Hutchinson can rush the QB and stop the run — two things Detroit struggled to do last season.

In order for Lovie Smith’s Cover 2 scheme to be successful, Houston must pressure the quarterback. Thibodeaux gives the Texans a key building block up front.

After letting Marcus Maye walk in free agency, the Jets land a versatile, young safety who can play a Kam Chancellor-like role in Robert Saleh’s defense to pair with the newly signed Jordan Whitehead.

The Giants’ biggest priority this offseason is protecting Daniel Jones and putting top-notch talent around him. As one of the most physically gifted players in this class, Neal improves the offensive line from the jump.

The Panthers had a front-row seat at Pickett’s pro day, and Matt Rhule seemingly liked what he saw. The Panthers have had a different starting QB in each of Rhule’s two seasons as head coach. Let’s make it three straight! (Hopefully this one sticks.)

The Giants turn to the defensive side of the ball with their second top-10 pick. They need an edge rusher who can get to the quarterback and help stymie the run game. Johnson does both.

With the suspension of Calvin Ridley and the relocation of Russell Gage, the Falcons must add to the receiving corps. How about the best wideout in this draft?

It makes no difference that the Seahawks have Drew Lock and are interested in re-signing Geno Smith. Seattle needs a franchise quarterback, and Willis could be the guy as an athletic, dual-threat playmaker. He will help the run game, force defenses to account for him and can heave it deep. Sound familiar, 12s?

Robert Saleh and the Jets nab the top cornerback in the draft. Gardner gives them a productive defender who’ll be tasked with locking down Stefon Diggs twice a year.

Ekwonu still has room to develop but boasts the intangibles to become a mainstay up front for the Commanders. With Brandon Scherff‘s exit in free agency, I could see Sam Cosmi sliding inside to fill the void at guard, giving Washington a solid right side in front of new QB Carson Wentz.

New general manager Kwesi Adofo-Mensah takes Stingley with his first draft pick in an effort to find the team’s new CB1. The LSU product comes with questions, but he has the natural talent to end the Vikings’ multi-year search for a top-tier cover man.

The Texans continue to add to Lovie Smith’s defense with a cornerback boasting good ball skills to play opposite of newly added Desmond King.

The Ravens need more talent around Lamar Jackson, so they add a top receiver prospect in Wilson, who is a polished route runner and at his best after the catch.

The Eagles had a measly 29 sacks in 2021, the second-lowest mark in the league. So, after adding Haason Reddick in free agency, they also add a reliable power rusher who can create havoc in the backfield like he did at Purdue.

Even with Fletcher Cox’s return, the Eagles need a long-term answer on the interior. Climbing in Daniel Jeremiah’s Top 50 prospect rankings, Wyatt will have the privilege to learn from the six-time Pro Bowler and develop into a big-time pass rusher — an area in which he has a ton of potential.

With Joey Bosa and Khalil Mack coming off the edges, the Chargers need a player who can push the pocket back into the quarterback. Davis can do it regularly while clogging up multiple gaps in the run game. He’s the real deal. Toss in free-agent addition Sebastian Joseph-Day, and the Bolts’ defensive front looks quite imposing.

Needing a replacement for the departed Terron Armstead, New Orleans gets a quality tackle prospect with ideal size (6-foot-5, 307 pounds) who played at a high level consistently at Mississippi State.

No linebackers in the first round for Philly. Sorry, Gio. Instead, the Eagles add a wide receiver with a high ceiling. Fans might have to wait a bit to see Williams get on the field, as he’s recovering from an ACL tear, but he’s electric.

Pittsburgh snags one of the toughest and most physical players in this year’s draft class to bolster the front line. His grit fits in perfectly with Mike Tomlin’s bunch.

Lloyd is a high-IQ leader in the middle of the defense, filling a hole left by the presumed departures of Dont’a Hightower and Jamie Collins in free agency. He steps right in to play alongside — and learn from — veteran Matthew Judon.

Davante Adams is headed to Las Vegas. The Packers MUST bring in some big-time playmakers for Aaron Rodgers. Olave gives the Packers speed to stretch the field and gives Rodgers the opportunity to show off his deep-ball accuracy.

The Cardinals find a solid cornerback to play opposite Byron Murphy. This pair will team up to stall the best wideouts across the NFC West.

The Cowboys need to bolster their offensive line in an effort to protect Dak Prescott and help the run game, especially after the release of La’el Collins. Linderbaum is the top interior blocker in this class and he’ll continue to improve at the next level.

The Bills haven’t had a 1,000-yard rusher since Shady McCoy in the 2017 season. Hall is a chain-mover who gives the Bills the hard-nosed, downhill run game they’ve lacked since Josh Allen’s arrival.

With Rodger Saffold and David Quessenberry departing in free agency, Green immediately steps in as a starter on the interior.

Filling the void left by Ali Marpet, Johnson is tasked with keeping the G.O.A.T. upright in his Age 45 season.

The Packers add another talented wideout for their MVP quarterback. The big-bodied Burks is a guy who can win the contested catch in the red zone. Plenty of future Lambeau Leaps for this guy.

Tyreek Hill is now in South Beach. So why not bring in a guy who ran a 4.36-second 40-yard dash at the NFL Scouting Combine? Watson is a great route runner who can stretch the field and a playmaker with the ability to contribute in many ways.

The Chiefs are extremely thin at the cornerback position. They add a press-man CB who’ll be challenged in the AFC West.

The Bengals have already bolstered their offensive line with some key pickups in free agency. To no one’s surprise, they add more help up front in the first round.

In a surprise move to some, the Lions select a strong-armed quarterback to learn under Jared Goff for a year before taking the reins in 2023.