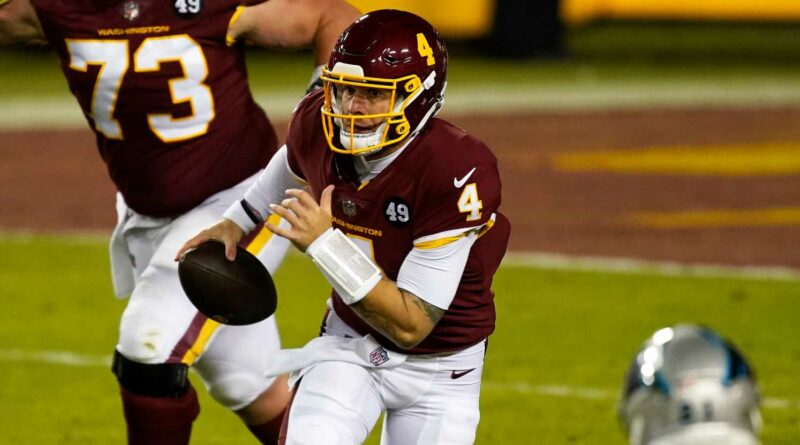 With Alex Smith nursing a bad calf, the Washington Football Team is reaching down the depth chart at quarterback for its wild-card round game against the Tampa Bay Buccaneers on Saturday night.

Washington will go with Taylor Heinicke, who will be making the second start of his career and his first in the postseason. And it will be opposite Tom Brady, who will extend his record for playoff starts to 42. He also has more playoff victories than anyone in NFL history.

The high-powered Buccaneers offense vs. a young but impressive WFT defense is the No. 4-5 seed matchup in the NFC.

According to NFL Network, Heinicke took the majority of snaps during practice this week.

Heinicke appeared in one regular-season contest for Washington when he relieved Dwayne Haskins on Dec. 27 against the Carolina Panthers. He completed 12 of 19 passing attempts for 137 yards and one touchdown (three rushes for 22 yards) to bring Washington within one score of Carolina.

Washington cut Haskins not long after the game, pressing Heinicke into the backup role behind Smith. And with Smith out, Heinicke’s number has been called again.

Who is Taylor Heinicke?

A native of the Atlanta suburbs, Heinicke was a four-year starter in college Old Dominion, which made the transition from FCS to FBS during his time there. He was not selected in the 2015 NFL draft but signed with Minnesota as a free agent.

Heinicke, 27, hung around the Vikings practice squad for 2015 and 2016 and spent some time in New England before the Houston Texans signed him in November 2017. He made his debut against the Pittsburgh Steelers on Christmas Day 2017 and completed his lone pass attempt, but suffered a concussion and had to exit.

In 2018, Heinicke landed with the Panthers, then coached by now-Washington head coach Ron Rivera. Heinicke started Carolina’s Week 16 game that season against the Atlanta Falcons, completing 33 of 53 passes for 274 yards with one touchdown and three interceptions. He suffered an elbow injury during the game and ended the season on injured reserve.

In between, Heinicke spent time in the XFL with the St. Louis BattleHawks (he did not see the field for them) and began taking mathematics courses at Old Dominion when Rivera and Washington called in early December with an offer to be the team's "quarantine" quarterback.

A few weeks later, he was back playing in the NFL, and on Saturday, he'll be leading a team in the playoffs.