Michigan got over a major hurdle when it knocked off Ohio State last week. It was the Wolverines’ first win over the Buckeyes since 2011 and the first of Michigan coach Jim Harbaugh’s tenure.

But with a loss to Iowa on Saturday in the Big Ten title game, the win over Ohio State would suddenly have far less meaning. It would once again be symbolic of Michigan reaching a major hill and failing to clear it, something that has plagued the maize and blue since Harbaugh’s arrival.

However, this is certainly one of the best teams Harbaugh has fielded in his return back to Ann Arbor. The Wolverines, like the Hawkeyes, have been known for strong running games and defense this season. In fact, it’s likely the best player on the field for both teams won’t be a quarterback.

For Michigan, it will likely be defensive end Aidan Hutchinson or linebacker David Ojabo leading the charge for the Wolverines’ defense. Hutchinson registered three sacks against Ohio State and is now the Wolverines’ single-season record holder in that category. Ojabo, meanwhile, provides a nice complement, with 11 tackles for loss and 11 sacks as well.

But Iowa’s offensive line boasts Tyler Linderbaum, the nation’s top center. He’ll likely be tasked with creating holes for star running back Tyler Goodson while Michigan’s offensive line will have to do the same for Hassan Haskins. Haskins scored five touchdowns against Ohio State.

This game is a must win for Michigan and could help define Harbaugh’s legacy at his alma mater. An Iowa win, however, likely keeps the Big Ten out of the playoff altogether.

Sporting News is tracking live scores and updates throughout the 2021 Big Ten championship game. Follow below for complete coverage.

8:25 p.m.: On third-and-7, Petras airs it out downfield and it falls complete, but Michigan gets hit for a defensive pass interference. Moves the Hawkeyes up to the Michigan 40 now looking at first-and-10.

8:23 p.m.: Spencer Petras hits tight end Sam LaPorta for 15 yards and then running back Tyler Goodson takes it for 2. Hawkeyes nearing midfield, looking at second-and-8 from their own 43.

8:20 p.m.: The Wolverines go three-and-out early and punt it away from their own 33. Iowa takes over at its 26 for its opening drive.

8:17 p.m.: Iowa wins the toss and defers. Michigan starts the game on offense.

What channel is Michigan vs. Iowa on today?

The 2021 Big Ten title game will air on Fox in primetime. Gus Johnson will man play-by-play

The Big Ten championship game will kick off at 8 p.m from Lucas Oil Stadium in Indianapolis.

*Game postponed from its original date of Saturday, Nov. 13 due to COVID-19 issues on Cal’s team 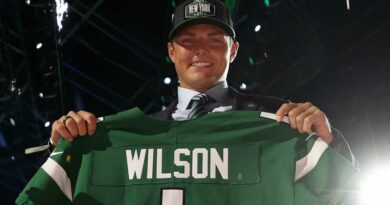 Is Zach Wilson playing tonight? What to expect from Jets rookie in Week 1 preseason start