Minnesota came into the match as favorites against Detroit, and they are showing why. Minnesota have a bit of a cushion as they currently lead Detroit 17-6 at halftime. Dalvin Cook has led the way so far for Minnesota, he has picked up 86 yards on the ground on 6 carries.

Minnesota have been a nightmare for Detroit’s QB with four sacks already. We’ll’s see how many sacks they can scare up the rest of the game.

Detroit will square off against Minnesota at 2:00 p.m. on Sunday. Coming off of a loss in a game they were expected to win, Detroit now face the more daunting task of proving themselves against unfavorable odds.

Detroit came up short against Seattle last week, falling 14-28. The defeat shouldn’t obscure the performances of Marvin Jones, who caught 7passes for 117 yards and 2 touchdowns, and Matthew Stafford, who passed for 310 yards and 2 touchdowns. If you haven’t heard Stafford’s name lately, then you haven’t been paying much attention: he has loomed large in Detroit’s past seven games.

After a string of three wins, Minnesota’s good fortune finally ran out. They fell to New Orleans 20-30. 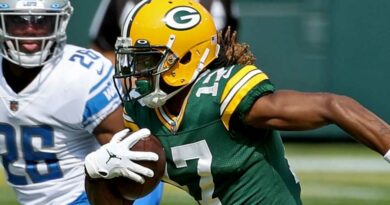 Packers’ next order of business: What Aaron Rodgers return to Green Bay means for Davante Adams