The wait for a decision on Missouri athletics’ appeal of NCAA sanctions has ended at long last — 299 days after they were first handed down.

The final answer, however, was the last thing the university wanted to hear.

The NCAA announced Tuesday that the initial January ruling by the Infractions Appeals Committee has been completely upheld. This includes a one-year postseason ban for football, softball and baseball as well as scholarship and recruiting restrictions.

Missouri athletic director Jim Sterk and chancellor Alexander Cartwright blasted the decision during a news conference at the Sprint Center in Kansas City ahead of a men’s basketball game Tuesday night. Sterk said the university was informed of the outcome Monday night. 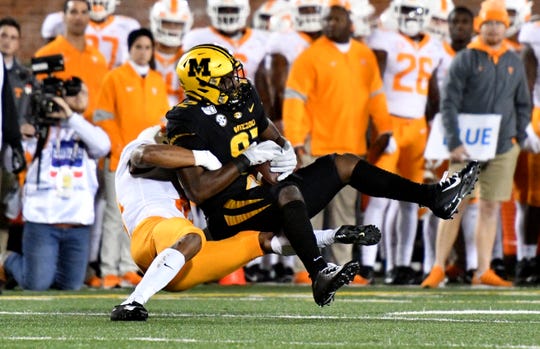 "When we received the decision, (there was) obviously disappointment and then shock quickly set in and now I'm just angry,” Sterk said. “I'm angry because of our student-athletes and coaches who were so wrongly impacted by this decision from the appeals committee and the committee on infractions. The NCAA has proven again it cannot effectively serve its membership and the student-athletes it's supposed to protect. The decision today is just wrong."

Missouri football is 5-6 entering its final game of the regular season Friday against Arkansas in Little Rock. The Tigers are one victory from reaching the regular six-win standard for bowl-eligibility, though that makes zero difference now in light of the decision.

"I hate the news for our program and for our seniors who have represented the university in a very positive way," Missouri head coach Barry Odom said. "This decision negatively impacts their short experience in life as college student-athletes who had nothing to do with this situation. It's a tough lesson to be dealt, but they will learn from this and motivationally use it later in life when hardship comes along."

The athletic department will not gain a projected $9-10 million in revenue given out by the Southeastern Conference from postseason events such as bowl games, the SEC championship game and the College Football Playoff, should the likely event of a conference school making the four-team national title event occur.

Cartwright said the athletic department will make up for lost revenue through a loan from other university resources. Sterk added that it will be a similar process to when MU athletics was at a deficit during the transition from the Big 12  to the SEC.

The university can attain half its missed conference revenue from this school year in five years if it isn't penalized further by the NCAA.

Missouri originally self-reported violations of academic fraud, something the NCAA was complimentary about, yet the sanctions were still thrown at the Tigers.

The NCAA first announced the penalties Jan. 31 following an investigation that began in November 2016. The investigation found violations by former Missouri tutor Yolanda Kumar, who publicly claimed allegations of academic fraud against the university.

The committee indicated that Kumar — who was hired by Missouri in 2010 and resigned in 2016 — acted alone in the academic fraud cases. In her interview with the NCAA and Missouri, Kumar said she was pressured to help student-athletes pass their courses. The NCAA stated “the investigation did not support that her colleagues directed her to complete the student-athletes’ work.”

Missouri filed its appeal in March and formally went before the committee in July.

“If you look at what we did, we acted with the highest integrity,” Cartwright said. “We immediately self-reported, we opened up completely to the NCAA enforcement staff, worked with them, went through the process, received exemplary cooperation throughout his entire process, and in the end, we received sanctions that others with comparable cases did not receive at all.

“That creates a truly chilling effect on compliance because people look at this and wonder, ‘If we do that, what will happen?’”

The softball and baseball programs will be ineligible for postseason play in 2020, including the SEC and NCAA tournaments.

"Shocked and dismayed" by the sanctions when they were first announced, Missouri started the #MakeItRight campaign, a public relations effort focused on being transparent about the case from every angle and to build momentum in favor of overturning the NCAA's ruling.

Missouri spent more than $500,000 on legal fees during the appeals process.

“Our athletic directors, our presidents, chancellors and commissioners need to collectively decide where we want to go,” Sterk said. “I think the current system is broken.”

Belichick: ‘Priority number one’ is health of team

How Urban Meyer, Jaguars can avoid ruining Trevor Lawrence after picking him in 2021 NFL Draft