Home » NFL » 'Monday Night Football' preview: What to watch for in Giants-Buccaneers 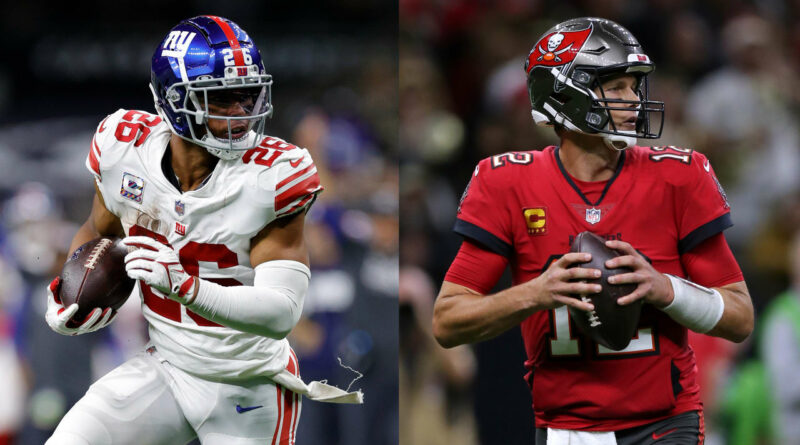 Things often haven’t been what they seem this season. It’s been the year of the upset, with a host of division leaders inexplicably losing to losing teams. Monday Night Football’s two representatives, the Tampa Bay Buccaneers and the New York Giants, are no strangers to this phenomenon. Just look at their last respective games. The Bucs went into Washington and were beaten decisively by a football team that had lost four straight and remains last in the NFC East despite the win. Like Washington, the Giants were a two-win team until taking down the then-AFC West leading Raiders two weeks ago. All three of New York’s wins have come against opponents who were (and still are) .500 or better. Will Monday mark the fourth?

Here are four things to watch for when the Bucs host the Giants in prime time:

1. Tom Brady is 51-15 coming off a loss. That is good, if you’re asking. In fact, it’s the best mark of any starting QB in league history following defeat. Brady, of course, was in the same situation a week ago and didn’t prevail, but he hasn’t lost three starts in a row since 2002, when the Pats dropped four straight. It’s the only time in his 22-year career that he’s lost more than two straight. Surely, it’s a testament to his longtime former head coach, but the 14-time Pro Bowler obviously wasn’t just along for the ride. It was during that 2002 skid that Brady ever threw two-plus interceptions in three consecutive games (he’s thrown two in each of the past two). We’re talking nearly 300 starts ago. His preparation, competitiveness and leadership and ability to minimize mistakes have proven to be just as important as his physical skills, and they’ve stopped countless snowballs from starting, much less accelerating down the hill. Even just the slightest bit of adversity usually brings out the best in Brady.

2. Brady’s well-documented history against the Giants is interesting but mostly irrelevant. To quickly rehash, he lost two Super Bowls to New York while with the Patriots, the second of which transpired 10 years ago. His overall record is a modest 5-3 and six of those games were decided by four points or fewer. Only the last one, though, a 25-23 win by the Buccaneers, is actually germane to this game. Midway through last season, New York outplayed Tampa Bay for three quarters until TB12 went to work in the fourth and led a pair of scoring drives to overcome what was once an 11-point deficit. That meeting was also on a Monday night in November, and with the Bucs at the top of the NFC South and the Giants at the bottom of the NFC East. It was New York’s strong defensive effort that was the catalyst to a close game and near upset at MetLife Stadium. Defensive coordinator Patrick Graham’s unit covered the Bucs’ elite receiving corps well and consistently made Brady uncomfortable. While that’s not an easy recipe to replicate, consider that perhaps no active head coach outside of Bill Belichick is more familiar with the 44-year-old QB than former Pats assistant Joe Judge.

3. Will Saquon Barkley make a difference? The Giants used to be really different on offense with a healthy Barkley. They just haven’t had that player in their backfield for most of the past two years. The banged-up back is expected to play Monday after sitting out four games with an ankle sprain. Injuries have sidelined him 18 of the past 23 games. He averaged just 3.6 yards between those absences and wasn’t as involved in the pass game as he’d once been, which naturally makes you wonder what he’ll be moving forward. At his best (and healthiest), Barkley was a constant home-run threat and one of the best all-around backs in the league. New York’s offense has averaged 100 yards more per game with Barkley active, which includes the many in the past two-plus years where he was playing through injury. The biggest X factor for the Giants is likely whether Daniel Jones protects the football. But offensive coordinator Jason Garrett’s game plan would ideally feature a fair share of Barkley touches, as they’d potentially force the Bucs D to account for more of the field and pay less attention to his speedy QB. If nothing else, Barkley being involved would be a sight for sore, Big Blue eyes.

4. There’s a world in which this game isn’t close at all. The Giants don’t run the ball well, their offense struggles mightily in the red zone, and Jones has a history of being turnover-happy, though he’s improved in that era this year. New York’s defense also allows a ton of yards and doesn’t generate much pressure (their 23.7% QB pressure rate is the fourth-lowest in the NFL, per Next Gen Stats. Conversely, the Bucs are dominant against the run, their defense thrives in the red zone and they rank sixth in the league in takeaways. For good measure, Tampa Bay is third in total offense and has allowed Brady to be pressured on just 16.7% of his dropbacks. These are not trends that portend to upsets. The Bucs have three wins of at least 23 points. The Giants have lost twice by 24 points. Such an outcome on Monday shouldn’t be a surprise.

Trump: Kap should get job ‘if he’s good enough’

Dez on facing Cowboys: ‘Water under the bridge’