The New York Giants and Atlanta Falcons each had high hopes coming into the 2018 NFL season, but for both franchises, those hopes appear to have already been dashed.

New York is 1-5 and looks like one of the worst teams in football, with an offense unable to consistently move the ball downfield and a defense that struggles to consistently get stops. The Falcons are 2-4 but have seemingly half their team on Injured Reserve, with starting running back Devonta Freeman, as well as linebacker Deion Jones and safeties Keanu Neal and Robert Alford looking like particularly damaging absences.

The Giants are lucky enough to be playing in what looks like a pretty bad division so they are technically still alive, but they also have the NFL’s sixth-worst point differential so it’s not as though they have the look of a sleeping Giant. The Falcons, meanwhile, are three full games behind the first-place Saints in the NFC South, and even a couple games back of a wild card spot. Time is running out.

Will either of these NFC squads be able to save their season with a win on Monday night? We’ll have to wait for Weeks 8-17 to find out. But for now, they’re just hoping to avoid the league’s basement. Here’s what to watch out for.

When the Giants have the ball

When discussing the Giants’ offense, the only place to start is with Saquon Barkley. (Let’s be honest, the rest of the offense is not worth writing home about.) Barkley has been flat-out spectacular early in his career, racking up 811 scrimmage yards and six touchdowns through his first six games. Only four players in NFL history ever exceeded that total: Eric Dickerson, Billy Sims, Kareem Hunt, and Adrian Peterson. Barkley’s also done something none of those four players even did at the start of their careers, though: he’s surpassed 400 rushing yards and 300 receiving yards in his first six games. He’s the first player to do that at all since Jamaal Charles in 2013, and just the 20th since the AFL-NFL merger.

And it’s not as though Barkley is doing this solely on volume. His 5.2 yards per carry average ranks sixth among qualified rushers. He has seven runs of 20 yards or more, most in the NFL. That means 8.3 percent of his carries have gone for over 20 yards. Compare that to other top rushers like Todd Gurley (3.5 percent), Ezekiel Elliott (3.8 percent), Hunt (4.2 percent), Melvin Gordon (4.4 percent), and James Conner (4.9 percent), and what Barkley is doing in terms of creating splash plays looks quite favorable. As discussed previously in this space, though, Barkley has been largely boom or bust. He ranks just 30th among 37 qualified runners in Football Outsiders’ success rate, indicating that he is being stopped at or behind the line of scrimmage far too often — even while he is doing a good job of evading tacklers at almost every opportunity.

And it’s in those numbers where you begin to see the argument that Barkley, despite all his merits, was not really worth the No. 2 overall pick. Even as terrific as he has been, it has not even been enough to keep the Giants offense on schedule, and the team’s offense has not even gotten much better with him in the fold. New York ranks 23rd in yards per game this season, as well as 27th in points per game. They ranked 21st and 31st last year, respectively.

On the surface it looks as though Barkley may be having a strong positive effect on Eli Manning’s performance as he is completing a career-best 68 percent of his passes and averaging his highest yards per attempt figure since 2015, but anyone watching Manning can tell you he looks just as bad as last year, if not worse, and in the midst of the best passing season in NFL history, Manning’s improved figures look modest at best. His completion rate is high but his yards per attempt barely cracks league average, he’s taking a metric ton of sacks, his throws almost never turn into touchdowns because he’s checking down for easy yards more often than not, and he’s not creating big plays. His QBR is actually even worse than it was in either of the last two seasons, indicating that he is not making a winning impact on a play-to-play basis.

He has struggled to consistently get Odell Beckham going, as Beckham has alternated strong 100-yard games with mediocre performances all year. He has 45 catches for 506 yards through six games, which puts him at nearly a career-high in terms of receptions per game but at a career-low in yards per reception by more than a full yard per catch. Sterling Shepard has been similarly inconsistent, while no other receiver has really made an impact in the passing game.

Working against Atlanta’s banged-up defense may be the Giants’ best chance to truly break out offensively. The Falcons have been absolutely obliterated by pass-catching running backs, yielding 53 catches for 425 yards and two scores to players at the position. Those 53 catches are the most in the league even though the Falcons have not yet played their seventh game. Considering how often the Giants get Barkley involved in the passing game, it seems a safe bet that he will rack up touches on Monday. The returning Evan Engram also has a chance to make an impact, as the Falcons’ loss of their middle linebacker and two safeties has left them increasingly vulnerable to tight ends as well. Of course, any success the Giants may have depends on Manning actually making the throws, and whether or not he can or will is seemingly an open question.

When the Falcons have the ball

Since last we addressed the Falcons in this space, the team has lost starting running back Devonta Freeman for at least eight weeks and possibly the entire season, as well as seen No. 2 and 3 wideouts Mohamed Sanu and rookie Calvin Ridley sustain injuries that knocked them out of last week’s game and limited them in practice throughout the entire week leading up to this game. Freeman is on IR, while Sanu and Ridley will play, but could be limited in some form or fashion.

The Atlanta run game has struggled badly this year without Freeman, as Tevin Coleman has failed to maintain efficiency while moving into a larger role and rookie Ito Smith has not been much more effective. Coleman had averaged 5.4 yards per touch through the first three years of his career while playing the change-of-pace role behind Freeman, but this year is at only 4.3 yards per touch. His 3.7 yards per carry average is easily a career-low, and disturbingly marks the continuation of a career-long trend where he’s averaged more rushes and fewer yards per rush with each passing season. Smith has turned into a decent weapon in the red zone with three touchdowns over the past three games, but he’s averaging only 3.0 yards per carry and has provided precious little in the way of help in the passing game.

For the most part, any movement the Falcons’ offense has created has come from the right arm of Matt Ryan, with the ball most often landing in the hands of Julio Jones — unless the ball is thrown into the end zone. Jones is on pace for a 1,888-yard receiving season but has yet to actually score, and it’s getting to the point where I’m wondering whether it’s a performance art project where Falcons offensive coordinators are trying to see how long they can go without throwing Jones the ball in the red zone. Still, he has been spectacular this season with 44 grabs across six games, and he’s accounted for over 48 percent of the Falcons’ targeted air yards, per NFL.com’s NextGen Stats, the highest rate in the league by a mile. (Beckham is the next closest player at 41 percent. They’re two of only three players over 40, along with A.J. Green.)

None of that is to say the Falcons’ other pass-catchers are unreliable, however. On the contrary, Ryan appears to have several other dependable options. Sanu and Ridley are banged up but each is averaging 3.7 receptions per game and gaining more than 50 yards in the air per contest. Ridley has caught six of Ryan’s 14 touchdown passes while Sanu has added three. Even tight end Austin Hooper appears to have broken out over the past few weeks, reeling in nine passes during each of the last two games, for 148 yards combined, plus a touchdown a week ago.

New York’s pass defense has been dreadful this season, struggling in particular against No. 1 receivers (Julio), slot men (Sanu), tight ends (Hooper), and running backs (Coleman/Smith). In other words, pretty much everyone has been able to throw on the G-Men. It’s reasonable to expect that Ryan will be able to do so as well. And with the Falcons having so many more weapons and being such a more efficient offensive machine than the Giants, it seems rather unlikely that Manning and company will be able to keep up. 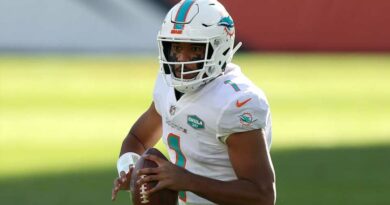