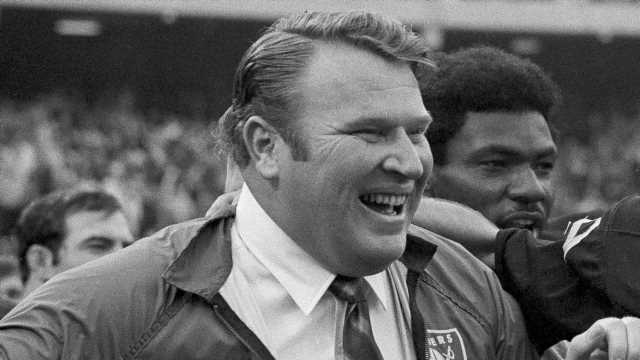 The NFL unexpectedly lost one of the most pivotal people in the history of the game on Tuesday when it was announced that Pro Football Hall of Fame coach and legendary broadcaster John Madden died at the age of 85.

NFL Commission Roger Goodell incapsulated Madden’s impact in his statement on Madden’s passing: “He was football.”

Madden’s death prompted an immediate outpouring of emotion from the football world at large Tuesday evening.

“On behalf of the entire NFL family, we extend our condolences to Virginia, Mike, Joe and their families. We all know him as the Hall of Fame coach of the Oakland Raiders and broadcaster who worked for every major network, but more than anything, he was a devoted husband, father and grandfather.

“Nobody loved football more than Coach. He was football. He was an incredible sounding board to me and so many others. There will never be another John Madden, and we will forever be indebted to him for all he did to make football and the NFL what it is today.”

“The entire Pro Football Hall of Fame family mourns the passing of Coach Madden. Few, if any, have had as great an impact on the sport of professional football on so many different levels as Coach Madden. He was first and foremost a coach. He was a coach on the field, a coach in the broadcast booth and a coach in life.

“He was dearly loved by millions of football fans worldwide.

“While it’s a very sad day, it’s also a day we should celebrate the life of a man who brought joy through the game of football to millions.

“The Raiders Family is deeply saddened by the passing of the legendary John Madden.

“Few individuals meant as much to the growth and popularity of professional football as Coach Madden, whose impact on the game both on and off the field was immeasurable.

“Hired as Head Coach of the Raiders by Al Davis at the age of just 32, Madden coached the Silver and Black for 10 seasons and compiled a remarkable 103-32-7 regular season record. From 1969-78, the Raiders posted winning records in each season, won seven division titles and qualified for the playoffs eight times. In 1976, Madden coached the Raiders to a 13-1 record and a 32-14 triumph over the Minnesota Vikings in Super Bowl XI, marking the franchise’s first World Championship of Professional Football.

“As professional football grew in popularity and influence, Madden and his Silver and Black teams played a significant role in some of the AFL and NFL’s seminal moments, including the “Sea of Hands,” “Immaculate Reception,” “Holy Roller” and “Ghost to the Post,” among others. Madden cemented his role as a football icon in the broadcast booth, serving as a leading color analyst for all four major television networks—CBS, FOX, ABC and NBC. His work on Monday Night Football, the inception of the annual All-Madden Team and his role in the Madden NFL series of video games made the Madden name synonymous with pro football.

“In 2006, Madden was presented for enshrinement to the Pro Football Hall of Fame by Al Davis, who opened his speech by calling Madden, “A brilliant coach. A loyal and trusted friend. A Raider.” The thoughts and prayers of the Raider Nation are with Virginia, Joseph, Michael and the entire Madden family at this time.”

“This is a loss that is as big as the legacy that John Madden created. A legacy of love. Love for family, for football and for life.

“I am not aware of anyone who has made a more meaningful impact on the National Football League than John Madden, and I know of no one who loved the game more.

“When I think of a person of sports who is worthy of the term, “larger than life,” I have always thought of John. And I always will.

“If you knew John, he made your life better. For me he was a trusted confidant, advisor, a teacher and above all, a very dear friend. When he walked into the room, it was a better day. When he talked, you listened, and you learned. When he laughed, everyone in the room laughed. And when he got back on the bus to leave, you always wanted more. You were always looking forward to his next visit.

“Our hearts go out to Virginia and Joe and Mike and the grandchildren. He is survived by a wonderful family and literally millions of loved ones.

“A life in football is a gift and a blessing. John lived all of his days with dignity, kindness and a sense of personal caring for everything and everyone.

“There is no one who lived a more beautiful football life than John Madden.”

We mourn the loss of a true giant of our game.

Whether you knew him as a Hall of Fame coach, legendary broadcaster or namesake of the video game generations have grown up playing, he was the face & voice of football for millions.

The Bills family is deeply saddened by the passing of NFL legend John Madden.

Our thoughts and condolences are with the Madden family during this time. ❤️ https://t.co/moLQgBzRBC

Rest In Peace to a Legend! Prayers to the Madden Family. 🙏🏽 https://t.co/4zvhu5vEUd

"The road to Easy Street goes through the sewer." — John Madden, RIP.

I hope John & Pat are calling a game somewhere

So sad to hear about the passing of a true Legend. #RIP John. pic.twitter.com/qO1H0Pbv33

RIP to the legend and Hall of Famer John Madden pic.twitter.com/kU05xxrk56

The biggest football icon of them all 👑

John Madden is football! So many people know the game because of his last name. He was a legend and great ambassador for the game. RIP

Just found out that John Madden has passed away. The world and the world of sports has lost a true icon. We all learns so much from him. My prayer go out to his family.

Rest in heaven John Madden!! True definition of legendary!! Thanks for all you did for the game I love with all my heart!! And you are a big reason for that!!