Last week was yet another crazy one in a wild 2021 NFL season, filled with twists and turns nobody in their right mind could have predicted. Jaguars over Bills? Titans without Derrick Henry over the Rams? Talk about volatile. However, our NFL DFS lineups remained rock solid thanks to our season-long strategy of finding sleepers and low-cost values for DraftKings and FanDuel contests early in the week. Let’s do more of the same ahead of Week 10.

If you regularly play DFS or you just like to find an edge or angle with all your football-related bets, this column will be up your alley all season. Each week, we put together a list of sleepers and/or under-the-radar picks to help you win some cold, hard cash on the two most popular daily fantasy sites. The more value players you add, the more money you’ll have left for proven weekly studs at other roster spots.

If you read this column last week, you would have benefited from our advice to plug a plethora of low-cost, high-value players into your Week 9 DFS lineups. Here’s a list of a few of our hits from last Sunday, including each player’s DraftKings cost and final PPR output:

Looks like another pretty good week in the books! If you plugged in two or three of these undervalued, productive players, you likely afforded yourself two more elite players at other roster spots. Getting the most bang for your buck has always been the name of the game in DFS, so it’s important to do your due diligence before constructing lineups.

Leave the deep-diving to us—we are here for you, from the first kickoff through the last play of the 2021 NFL season. Let’s jump right into Week 10!

All player values are from DraftKings and FanDuel. All stats are from NFL.com and Pro Football Reference.

Don’t look now, but the former MVP has the Falcons in sole possession of the seventh seed in the NFC playoff picture. He’s playing pretty damn well despite not having security blanket Calvin Ridley (personal). Atlanta has won three of its past four games, almost exclusively thanks to its passing game. Rookie tight end Kyle Pitts has turned out to be every bit as awesome as we thought, and multi-faceted RB/WR hybrid Cordarrelle Patterson has blessed everyone around him with his breakout. Matty Ice now averages 20.2 fantasy points per game, and Dallas ranks 30th in the NFL in fantasy points per game allowed to QBs. In a game projected by oddsmakers to reach 55 points with Atlanta a nine-point road underdog, sign me up for Matty on the Rocks. Even if it’s ugly, it should yield points.

Did you know that Indianapolis has the second-highest scoring offense in the AFC? Probably not, considering the Colts rank 12th in the conference record-wise. After Indy’s slow start, Wentz has thrived since Week 5, averaging 25.3 fantasy points per game in that span. He has accounted for three touchdowns in each of the past three games and has multiple TDs in all but two games this season. Now he gets a home game against Jacksonville, the 26th-ranked defense against QBs in fantasy. Wentz will get a boost if T.Y. Hilton returns from a concussion. Across his 10-year career, the four-time Pro Bowler averages 75.3 receiving yards per game against the Jags. Wentz and Hilton can be stacked for a user-friendly total cost of just $10,600.

Readers must think I’m a Teddy B fanboy because he’s appeared in this column a handful of times already this season. But as long as he’s listed below $6,000 in a decent matchup, he’s worthy of a shoutout. Bridgewater and the Broncos toppled the Cowboys in Arlington last week, and now they head home to Mile High to welcome a Philly secondary that Justin Herbert and the Chargers just gashed for 356 passing yards. Take Bridgewater at $1,000 less than Eagles QB Jalen Hurts (DK: $6,500) so you can upgrade an RB slot from someone like New England’s Damien Harris ($5,900) to Green Bay’s Aaron Jones ($6,900).

I’m all over the Broncos this week because the Eagles are a bad team hiding behind a super-athletic quarterback. Philly can’t stop the run, surrendering 119.7 ground yards per game this season. It’s also allowed six rushing TDs over its past four games. Gordon has been fairly efficient this season, averaging five yards per touch, and has scored six times, including four in the past three weeks.

Plot twist! Yes, I’m advocating for both Broncos running backs this weekend. Hey, they are practically splitting snaps and carries at an even 50/50 pace, and it’s hard to argue with the results! Williams ran for 111 yards against Dallas last week, showcasing his burst and elusiveness. The breakout seems imminent now, especially considering I just traded him and George Kittle for Travis Kelce in my hometown fantasy league. The Eagles rank 25th in fantasy points allowed to running backs, so don’t hesitate to grab either (or both) of Denver’s backs.

Here’s one with a high ceiling and floor, which we love to see at such low costs. Pollard will yield massive upside if Ezekiel Elliott is slowed by a sore knee, but he’s also going to be well worth $4,600 in a PPR even if Zeke plays as usual. The Falcons cede the fifth-most fantasy points to running backs, and Pollard has been remarkably efficient with his opportunities this season. His 5.6 yards-per-carry average ranks fourth among all RBs in the NFL, just behind Nick Chubb, Jonathan Taylor, and Chase Edmonds.

You probably expected the Cordarrelle Patterson stack with Matt Ryan after I hyped him up earlier, but he’s listed as a running back and going for $6,000. No value there! Instead, I’ll take Gage, a Falcon who still seems to be flying under the DFS radar. Gage caught seven-of-eight targets for 64 yards in Atlanta’s 27-25 win over New Orleans on Sunday. That marks the second time in three games he has recorded at least 64 yards, and the third time in his five games he has been targeted six times or more. The Cowboys rank 24th in PPR points allowed to wideouts, and Jerry Jeudy and Tim Patrick just combined for 10-154-1 line in Arlington in Week 9. Take the Gage out of the cage.

I’m not normally superstitious, but I fully believe that I beckon a player’s breakout when I trade them away. So, bye-bye Jakobi, who I just dealt from two different fantasy teams. I’m positive Meyers will now score his first touchdown (after 38 career games, 131 catches, and 1,522 receiving yards). The Browns rank 23rd in fantasy points surrendered to wide receivers. This is the week, trust me — the fantasy Gods are cruel to me, but at least I can use my bad juju to my advantage as an analyst. (I’m only half-joking, sadly.)

Like I told you before when we discussed Wentz, Hilton is a great play at $4,700 if he suits up this week after recovering from a concussion. The Jaguars are the fourth-most generous defense to wide receivers in fantasy land, and Hilton takes great pride in mashing division rivals. If he plays, stack Hilton with Wentz and enjoy double the pleasure, double the fun. Second-year stud wideout Michael Pittman Jr. can’t have all the glory every week.

I promise I’m not starting Bridgewater, Gordon, Williams, and Fant on one individual DFS entry, but I will certainly have shares of each scattered across various submissions. Fant will more than likely come off the COVID-19 list this week, yet he’s still priced at $4,300 like he’s stuck in quarantine. Capitalize on the timing, snatch up the Fant, and do a little dance. Philly ranks dead last against the tight end position in fantasy.

Shout out to my favorite podcast, the Fantasy Footballers, who regularly make me spit out my coffee each week when they yell out “The ‘muth is looth!” How can you not love that? And how can you not love Freiermuth’s production as of late? Eric Ebron has been MIA with injuries over the past few weeks, allowing ‘muth to run looth to his heart’s content. The rookie Penn State product caught five-of-six targets for 43 yards and two scores in Pittsburgh’s Monday night win over the Bears, and now he draws a Lions defense that just allowed Dallas Goedert to grab six catches for 72 yards. Let it looth before ‘muth’s price boosts.

The defending-champion Bucs have been one of the better all-around defenses all season, and their fantasy production unsurprisingly coincides with this fact. Don’t overthink this one — $3,500 is a great value for an elite defense going up against a reeling Washington Football Team. Washington allows D/STs to score the 10th-most fantasy points per game this season. Buc ’em up.

Meyer to be OSU asst. AD when done as coach 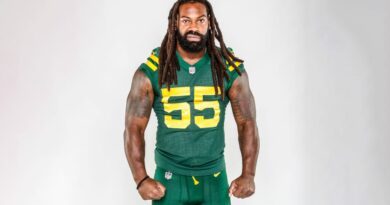