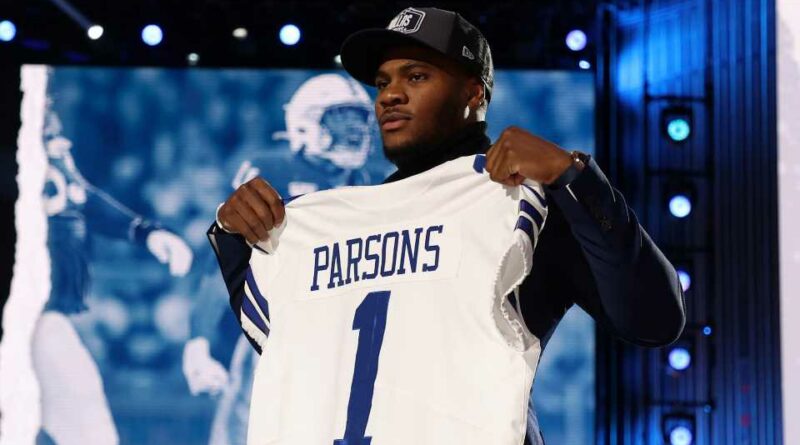 The 2021 NFL Draft started with three quarterbacks in three picks — and one surprise in that group. More surprises followed.

Trevor Lawrence and Zach Wilson went 1-2 as expected, but then the 49ers surprised by taking North Dakota State’s Trey Lance with the third pick. Did San Francisco make the right decision?

The quarterback surprises didn’t stop there. The Bears traded up with the Giants to get Ohio State’s Justin Fields with the No. 11 pick. That gave the Bears yet another draft-day-trade quarterback. Did Chicago make the right decision?

Alabama’s Mac Jones, the fifth quarterback taken in the first round, fell to the Patriots at No. 15. That was the only decision at that point.

Those quarterback decisions weren’t the only source of entertainment in Round 1. Sporting News looks at the winners and losers from the first night:

The 49ers’ quarterback debate was a mystery until the pick was in, and Lance was their final answer ahead of Fields and Jones.

The North Dakota State star was a top-three pick despite playing in one game for the Bison last fall, and of the five quarterbacks taken in the first round, he is in the best win-now situation with what should be a healthier San Francisco team that is one year removed from a Super Bowl appearance.

Lance will have to win the starting job from Jimmy Garoppolo — and there might be a grooming period in 2021 considering Lance made just 17 starts in college, all at the FCS level — but Lance’s dynamic talent was enough for coach Kyle Shannahan to take a gamble.

The Bears traded up to grab Fields, who faced the most scrutiny of any quarterback in this draft. Fields enjoyed a prolific two-year stretch as Ohio State’s starter, but continuous questions about his work ethic, his ability to read defenses and the revelation he is managing epilepsy led to him falling out of the top 10. Chicago general manager Ryan Pace needs this pick to pan out; Fields is a dual-threat talent with high upside.

Then there’s Jones, who was the last quarterback taken in the first round. He slipped to No. 15, but the good news for him is he landed with the Patriots and Bill Belichick. Jones will have to beat out Cam Newton to be the starter, but the conductor of Alabama’s record-setting offense in 2020 is in a winning situation.

New England could have gone back to the past and traded for Garoppolo. Instead, it will look to the future with Jones, whom it got at mid-round value.

These veteran quarterbacks likely will fall into backup roles in 2021 as a result of three corresponding first-round picks.

Garoppolo started in a Super Bowl two seasons ago, but the 49ers reportedly tried to strike a draft-day blockbuster with the Packers for Aaron Rodgers before drafting Lance.

Dalton, who was signed by the Bears on a one-year deal in the offseason, now will likely be a placeholder at best for Fields. It’s a good bet the “Red Rocket” will be shuffled into a backup role like he was with the Cowboys to start 2020. Newton signed an incentive-laden deal with the Patriots last offseason, but Jones might be the better fit in New England’s offense.

The 49ers, Bears and Patriots will face pressure to make the postseason in 2021. It’s a good bet rookies will lead the respective charges.

Both Alabama receivers landed in the top 10 and they will be reunited with former Alabama quarterbacks.

Waddle, who averaged 18.9 yards per catch in three seasons with the Crimson Tide, will be a vertical threat for second-year quarterback Tua Tagovailoa with the Dolphins. Waddle was the most explosive player in the FBS before suffering a leg injury last season.

Smith took advantage of Waddle’s absence to turn in a record-setting season that led to him becoming the first Heisman Trophy-winning receiver since 1991. The Eagles traded up with the Cowboys to get Smith, and now he’ll be paired with second-year quarterback Jalen Hurts.

What happened to defensive tackles? A talented crop that featured Alabama’s Christian Barmore, Florida State’s Marvin Wilson and Iowa’s Daviyon Nixon was ignored in the first round.

This comes just two years after six defensive tackles were taken in the first round. Barmore, Wilson and Nixon will be among the more interesting Day 2 picks, but the position dipped in value with this class.

Dallas worked the draft board by trading down two spots with Philadelphia and picking up a third-round pick.

Dallas then grabbed Penn State linebacker Micah Parsons, the top linebacker on the board. Parsons, who opted out of the 2020 season, should help a defense that allowed 29.6 points per game last season. Longtime linebacker Sean Lee retired.

Parsons should step in as a starter right away after owner Jerry Jones resisted the urge to trade up to make a splashy offensive pick. Give Dallas credit for making the right pick, and for working with a NFC East rival to do it.

The Raiders are no stranger to off-the-wall picks. They took Clelin Ferrell in 2018, and he has had 6.5 sacks in two seasons. Henry Ruggs was the pick last season, and he had an uneven rookie year at receiver.

This year, Las Vegas took Alabama tackle Alex Leatherwood, who was projected to be a second-round pick in most mocks. General manager Mike Mayock and coach Jon Gruden continue to go against the grain, and in this case they fell in with the run of first-round tackles.

Pittsburgh got its running back. Alabama’s Najee Harris should make an instant impact in a running game that was lacking in 2020. Pittsburgh averaged just 3.6 yards per carry and the offense sputtered in the second half of the season.

Quarterback Ben Roethlisberger is back, however, and Harris’ ability to close in the red zone and catch the ball out of the backfield will be a huge plus for a unit that will look to keep pace with AFC North favorites Baltimore and Cleveland. This is a pivotal year for coach Mike Tomlin, and addressing the running game was a priority.

Let’s be honest. It didn’t matter who the Packers selected after the firestorm that grew from Adam Schefter’s report that Rodgers wants out of Green Bay. The Packers could have traded up for a receiver, but once Minnesota’s Rashod Bateman went off the board, they settled for Georgia cornerback Eric Stokes.

IYER: Best players available after Round 1

To be fair, cornerback was another pressing need, but the drama with Rodgers is far from over. Green Bay needs to find more immediate contributors on Day 2; it’s time to address receiver. Ole Miss’ Elijah Moore was there for the taking. Was that who Rodgers wanted?

Updates on college football season: What will the Big Ten, SEC and Power Five leagues do?