What should we make of the deal? We asked our experts who cover the league to weigh in, from projecting OBJ’s statline this season to making a pick for the AFC North title.

Rate the Browns on the 1-10 love-it-or-hate-it scale: How did they fare in the deal?

Matt Bowen, NFL writer: 10. Give Browns general manager John Dorsey the credit here. That’s a strong move to land Beckham, a dynamic talent who can win at all three levels of the route tree. Playmaking ability to pair with QB Baker Mayfield, WR Jarvis Landry and RB Nick Chubb in Freddie Kitchens’ system. That’s going to be a tough offense to prep for.

Mike Clay, fantasy writer: 9. The Browns got the best player in the deal — a 26-year-old superstar wide receiver and offensive game-changer signed through 2023. Draft picks are far from sure things, and though Jabrill Peppers did take a step forward in 2018, he was still playing only two-thirds of the defensive snaps.

Dan Graziano, national NFL writer: 10. Beckham is a monster player, an incredible difference-maker, and a better player than the Browns should have been able to get for their offense. With Landry (who honest-to-God is Beckham’s closest friend in the world) working underneath and Beckham stretching the field, Baker Mayfield is going to be able to open things up even more than he did last season. The Browns were already a division favorite in my mind and now it’s even clearer. Dorsey could end up a Cleveland legend, and Eliot Wolf, Alonzo Highsmith and all those former Packers execs he brought in for his front office are going to be hot GM candidates in no time.

Mina Kimes, NFL writer: 10. When I saw what the Browns gave up for Beckham, I was stunned — I thought it would take more than one first-round pick. He’s young, he’s one of the most talented receivers in recent NFL history, and his contract, which will cost them a little more than $15 million a year going forward, is a relative bargain. This is a heist for Cleveland.

Jason Reid, The Undefeated senior writer: 10. Ah, that’s all it took for the Browns to get a transcendent wideout who won’t turn 27 until November? It’s hard to fathom that the Giants would make such a move without receiving multiple first-rounders in return for Beckham. You’re talking about a game-changer who demands double coverage. And when those safeties roll to Beckham, Landry will feast on midrange routes. Already on the cusp of being an elite passer as a rookie, Mayfield will enter his second season with the receiving corps he needs to skyrocket to Tier 1 status. And if you think that’s a stretch, just sit back and watch.

Mike Sando, senior NFL writer: 7. Getting an elite talent in his prime and under contract is tough to do. The Browns pulled it off. The big question I have — and it is a big one — is how well Beckham fits into any larger culture the Browns might be trying to create. This concern is mitigated some by the presence in Cleveland of Beckham’s college position coach (Adam Henry) and college teammate (Landry). But with Beckham, Landry and other strong personalities in that locker room, including possibly Earl Thomas, the Browns are asking a lot from first-time head coach Freddie Kitchens. This team could be spectacular or blow up spectacularly.

Kevin Seifert, national NFL writer: 9. Nothing and no one is perfect. The Browns have taken into their locker room a strong and emotional personality. They have a second-year quarterback and a rookie head coach. There will be some growing pains. On the field, however, this deal is lights out.

Field Yates, NFL analyst: 10. When you have a chance to acquire one of the premier playmakers in the NFL who is under contract for five more seasons, you don’t blink. The Browns did not. This is a home run.

Rate the Giants on the 1-10 love-it-or-hate-it scale: How did they fare in the deal?

Bowen: 2. I’m struggling to figure out the direction of the franchise — and the identity the Giants are trying to build — after trading away Beckham in the prime of his career. Yes, the Giants got multiple picks and Peppers in the deal, but Beckham is a game-changer. Hard to find those guys.

Clay: 1. What on earth are the Giants doing? Dumping Beckham is their most egregious move yet, but they’ve also moved on from NT Damon Harrison, CB Eli Apple, LB Olivier Vernon and S Landon Collins over the past year. Newcomer Peppers is only 23 and certainly could emerge to become a difference-maker and they’ve done a nice job upgrading the offensive line, but at what cost? This 38-year-old-quarterback-led roster is officially one of the worst in the league.

Graziano: 1. The Giants are an unmitigated fiasco at this point. You can argue that they should be in rebuild mode and you’d be right. The problem is they should have been in rebuild mode last year and Gettleman insisted (and operated as if) they weren’t. If you’re in rebuild mode, you don’t even sign Beckham to the deal you gave him last summer. Now they’re eating $28 million in dead money over the next two years and have paid Beckham a little bit less than $22 million for 12 games. Last year was the QB draft, and they took a running back. This year is the defensive line draft, and they might need to take a QB instead. They’re not keeping up with reality.

Kimes: 2. I’m dumbfounded. Unlike Antonio Brown, Beckham didn’t force New York’s hand. The fact that they’re trading him so quickly after extending him (the team will incur $16 million in dead money this year), makes me question the Giants’ strategy. It seems possible that they’re trying to accrue assets to pursue a young quarterback, but isn’t that a need they should’ve foreseen last year before they paid Beckham?

Reid: 1. I would have gone lower, but the editors didn’t provide that option. I’ve been saying for weeks that the Giants must have a plan. And they do: It just appears to be a really, really bad one. Why did they recommit to Eli Manning for another season and trade Beckham, who received a massive deal last summer? Why didn’t they draft a quarterback in last year’s quarterback-deep draft? And if they’re about to begin a rebuild, why is Manning still atop the roster? What’s clear is that Tuna (Bill Parcells), Lawrence Taylor and Phil Simms aren’t walking through that door. And even if they did, they couldn’t help fix this mess.

Sando: 3. It’s usually a terrible sign when an organization led by the same people changes course so abruptly within a one-year span. What is the plan? If the Giants realized they made a mistake by signing Beckham to a rich deal, it’s understandable that they might want to undo that mistake. However, they should have known all they needed to know about Beckham before entering into an extension. At least they got something in return.

Seifert: 2. Even if you could make a plausible argument for trading a transcendent player locked into a five-year contract, it’s impossible to believe that this is all you could get for him. The only partially redeeming consequence for the Giants will be if they use the first-round pick to move up and draft a quarterback who could replace Manning sooner rather than later.

Yates: 1. This underscores what some around the NFL have believed for quite some time: The Giants were never fully sold on Beckham from the moment they signed him to an extension. In the NFL, it’s important to have a clear path, even if it’s one that means retooling or rebuilding. What is the Giants’ path?

Bowen: Browns. Their nucleus of talent on offense will put them in a position to compete with the league’s best, but don’t forget about the defensive front Dorsey has put together. Those are the guys who will close out games in December to pull away from the Ravens and Steelers in the AFC North.

Clay: Browns. The Steelers’ demise has been greatly exaggerated — they still have a pretty good roster despite the Antonio Brown trade — but Cleveland’s acquisition of Beckham pushes the Browns to the top of the division for the first time in a long time. Cleveland still needs work at linebacker and safety, and the offensive line is OK at best, but the offseason is young. Mayfield & Co. are primed to get Cleveland back to the playoffs for the first time since 2002.

Graziano: Browns. They were my pick before this, and the way this week has gone for them, the Ravens and the Steelers wouldn’t make anyone move off it. Even though I know Seifert is going to tell me it’s the “easy” pick.

Kimes: Browns. I think the Steelers’ offense shouldn’t decline too much, even without Brown, but their defense isn’t there yet. The Ravens’ defense has taken a hit in free agency. And the Bengals … yeah, I’ll go with the Browns.

Reid: Browns. This will be the en vogue pick because of Beckham. I get that. It’s also the correct pick.

Sando: Steelers. I go back and forth on this one. The Browns are the most talented team in the division. They should win it on talent. I’m just not sure a first-time head coach will handle the personalities, expectations and questionable ownership. I’ll stick with Pittsburgh for now while reserving the right to abandon ship.

Seifert: Ravens. It’s too easy to pick the Browns right now. (And the Steelers and Bengals are both a mess, of course.) Are we certain that the Browns’ new coaching staff will pull all of these new (and talented) players together seamlessly and immediately in a way that hasn’t happened in a quarter century for this franchise?

Yates: Browns. Sure, this will be perceived as a knee-jerk reaction. And that might be the case. It’s fair to note that a first-time full-time head coach in Kitchens will have his work cut out for him to manage expectations surrounding the team and its swell of talent. But the Browns also showed last season that they’re tough, explosive and unafraid. 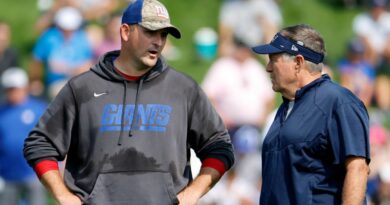