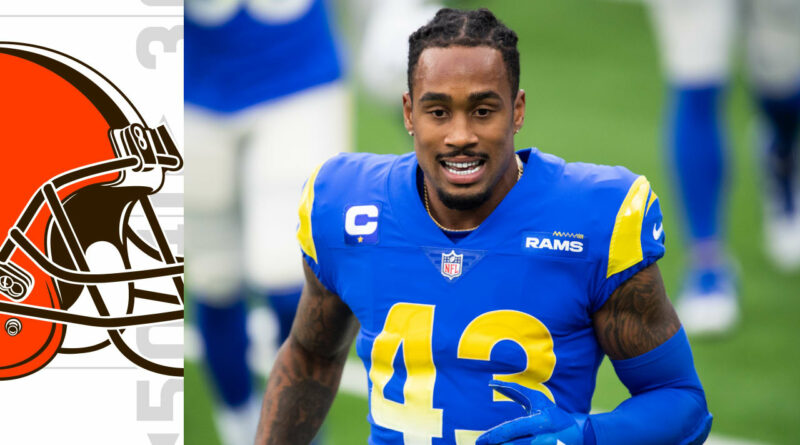 A week into the new league year, movement across the NFL has come fast and furious. So, of all the players who’ve changed teams so far this offseason, which ones will legitimately move the meter in 2021?

I absolutely love the New England Patriots’ approach this offseason. The cupboard was bare in 2020, which is why I predicted — correctly — that the Pats would suffer their first losing season since 2000. The roster was a barren wasteland. New England won seven games because Bill Belichick is the greatest coach in sports history. The Pats needed to replenish everywhere, and did. You won’t see a Patriot on this list — I considered Hunter Henry﻿, Jonnu Smith and Matt Judon﻿, my three favorite pickups by the team — because I think the beauty of New England’s offseason haul is in the sum of its parts. There were many, and rightfully so.

Meanwhile, the New York Giants made a couple moves to help them on both sides of the passing game — signing WR Kenny Golladay and CB Adoree' Jackson — but I still don’t believe in the team’s passer. So that kinda puts a damper on everything.

Three signings that just missed the cut: J.J. Watt to Arizona, Dalvin Tomlinson to Minnesota and ﻿Kevin Zeitler﻿ to Baltimore.

Without further ado, here are nine free-agent signings/trades that’ll have the biggest impact on the 2021 season:

Big contract for an offensive guard? Yup. And Thuney’s worth every penny to the Chiefs. With the incredible Patrick Mahomes behind center, Kansas City’s now basically expected to make the Super Bowl every season. Hyperbolic stuff, but that’s the genius of Mahomes, whom Andy Reid and Brett Veach locked up for half a billion dollars last offseason. You have to protect that investment.

Mahomes was rocked by Tampa Bay’s ferocious front in the Super Bowl. Eric Fisher and Mitchell Schwartz are out. Thuney is a dominant, reliable stud who doesn’t make mistakes. Perfect.

Trade terms: Acquired from the Detroit Lions in exchange for QB Jared Goff, a 2021 third-round pick and first-round picks in 2022 and ’23.

I think Stafford is a wonderfully talented quarterback whose greatness got lost in the abyss of a franchise that’s been rebuilding since 1957. He’s a major upgrade over Goff — and very well could be the missing piece of Sean McVay’s Lombardi Trophy puzzle.

For a long period of time last season, I thought the Rams could be the Bucs. Los Angeles had the defense and the coaching. The quarterback proved to be a double agent, though, undermining the Rams’ best efforts. Stafford is going to sizzle under McVay. This move puts the Rams squarely in the Super Bowl mix. In fact, you can easily make the case that L.A.’s the front-runner in the NFC.

Johnson left the Rams to sign in Cleveland, apparently turning down significantly more money from another organization because he loves the team, the city and the makeup of these Browns. How great is that, long-suffering Cleveland fans?!

Johnson is a versatile, playmaking defensive back who’s also a great leader. And this just underscores an emerging narrative: Cleveland is ready to rock. Seriously! The team’s collecting all the necessary tangibles and intangibles.

Like Thuney, Linsley broke the bank. Also like Thuney, Linsley’s worth every penny. Justin Herbert is going to be a sensational quarterback for a long time — IF the Bolts put him in a position to succeed. A big part of that is providing the proper protection.

Tom Telesco knows what he’s doing, and the Chargers GM knew he had to sign the best center in the game. I audibly yelled “WOW!” when this move came across last week. Color me obsessed. And this is the kind of transaction — in conjunction with the Chargers’ coaching change — that has me fired up about Los Angeles making the playoffs in 2021.

Trade terms: Acquired from the Philadelphia Eagles in exchange for a 2021 third-round pick and a conditional 2022 second-rounder.

I love it. You don’t have to guess if Wentz can be a star. He’s been one. He was well on his way to receiving my Associated Press MVP vote in 2017, prior to tearing up his knee in Week 14. He carried a bunch of no-names to the playoffs in 2019, going 4-0 in the division down the stretch while playing brilliant ball.

Now, in 2020, you can make a case he was the worst QB1 in the NFL. Fine. I think it was circumstantial — and a blip on the radar. I know he can thrive under Colts coach Frank Reich, who was Wentz’s offensive coordinator in that spectacular 2017 campaign. Compared to the Philadelphia team Wentz just left, Indy has a vastly superior line, a much better defense and a run game. Wentz will thrive. Indy will win the AFC South.

Chicago dumped Fuller because of his cap number, and he was on the street for what felt like 30 seconds. Not surprising. The 29-year-old is still an excellent corner. And who scooped him up? Former Chicago defensive mastermind Vic Fangio, something that did NOT go unnoticed by Bears fans. Fuller led the league with seven picks and earned first-team All-Pro honors under Fangio in 2018. This is sheer perfection.

If (when) Denver improves the quarterback position, this team might just have something. The Broncos haven’t made the playoffs since winning Super Bowl 50. A five-year postseason drought is too long for such a proud franchise.

Trade terms: Acquired from the Las Vegas Raiders (along with a 2021 seventh-round pick) in exchange for a 2021 third-round selection.

The Raiders’ offseason has been beyond wacky. And this seems to be an annual occurrence in the organization’s second Jon Gruden era. Las Vegas torpedoed the strength of its team, breaking up the offensive line. Enter Steve Keim, who took full advantage of the Raiders’ nonsensical approach.

Arizona is ready to win and go on a run. Keim improved the pass rush with J.J. Watt﻿, the receiving corps with A.J. Green and a netted a huge, needed upgrade at kicker with Matt Prater﻿. But it’s Hudson protecting Kyler Murray — while serving as a strong team leader — that will produce more wins than any other Cards move.

Contract terms: One year, $10.625 million fully guaranteed with another $3 million in incentives.

Miami needed an established threat opposite DeVante Parker in the worst way. Despite Fuller being suspended for Week 1, I really like this fit. Fuller can absolutely fly and make plays. The one-year contract was reasonable, given how much this deep threat affects opposing defenses, and Fuller will be highly motivated to boost his free agency stock for next offseason.

Miami still has a ton of flexibility with next month’s No. 3 overall pick. The Fins could add another pass-catching weapon (Ja’Marr Chase? Kyle Pitts? DeVonta Smith?) to help Tua Tagovailoa﻿’s development even more in Year 2. Don’t sleep on Fuller’s hands and game-breaking ability. This cat’s dangerous.

I really like the start to the Jets’ offseason — and that includes their choice of Robert Saleh as head coach. Lawson is a rock-solid pass rusher. I am projecting here, but under the watchful eye of Saleh, I think he can blossom into a big-time player. The Jets won’t have the talent of the other three AFC East teams this year, but everything will change attitude-wise with Saleh instead of Adam Gase.

And don’t forget: The Jets haven’t had a viable edge rusher since John Abraham﻿. If Lawson sacks the quarterback 12 times this year, I won’t bat an eye.

NFL players, owners continue to haggle about COVID-19’s expected financial fallout in 2020 and beyond