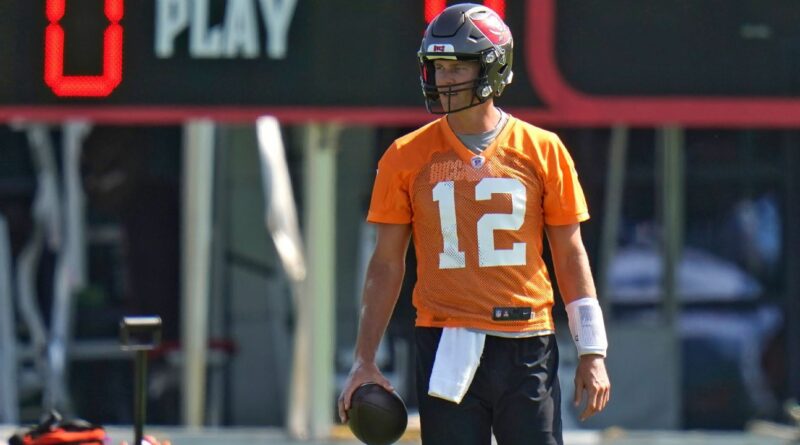 Eleven teams are scheduled to open their mandatory three-day minicamps this week, and 18 more will follow next week. The Miami Dolphins held their camp last week, while the Philadelphia Eagles and Cincinnati Bengals aren’t holding minicamp this year.

Teams already have been going through organized team activities, but this marks the first time many veterans will take the field since the end of last season — including Tampa Bay Buccaneers quarterback Tom Brady, who retired and unretired in a 40-day span. It also includes some players who joined new teams in a whirlwind of an offseason. Who shows up will also be something to keep an eye on, as a few players could hold out amid ongoing contract negotiations.

What do you need to know about this week’s activities? We asked our NFL Nation reporters to preview this week’s minicamps and tell us the biggest thing they are watching.

It will be interesting to see how quarterback Jared Goff is able to mesh in Year 2 with his offensive weapons. The Lions added former Jacksonville Jaguars receiver D.J. Chark, plus Goff has second-year receiver Amon-Ra St. Brown, tight end T.J. Hockenson and dual-threat running back D’Andre Swift as strong options. Detroit’s front office showed its confidence in Goff by passing on a quarterback in the draft despite his 33 total QBR and going 3-13-1 in 2021. Goff will be looking to prove himself early. — Eric Woodyard

How will quarterback Aaron Rodgers connect with his new receivers? Assuming Rodgers shows for the camp — he said previously he planned to — and participates, it will provide the best chance to date for him to work extensively with second-round pick Christian Watson, fourth-rounder Romeo Doubs and seventh-rounder Samori Toure. Gone are Rodgers’ favorite target, Davante Adams, and his best deep threat in Marquez Valdes-Scantling. Watson said shortly after the draft that Rodgers called to congratulate him and said, “He wanted to make sure that I knew that he was looking out and that when he stepped in the building that it was time to work.” — Rob Demovsky

Veteran quarterback Matt Ryan is the focal point of Colts minicamp, as he’s in line to become their sixth different Week 1 starter since 2017. He’s taking over an offense that lost its starting right guard (Mark Glowinski) and left tackle (Eric Fisher) and currently doesn’t have reliable receiver T.Y. Hilton (free agent) with which to work. What Ryan has in his favor is last season’s NFL rushing leader Jonathan Taylor (1,811 yards). The defense went through somewhat of an overhaul during the offseason and Gus Bradley is the new coordinator. The Colts also acquired cornerback Stephon Gilmore and defensive end Yannick Ngakoue to join holdovers Darius Leonard, DeForest Buckner and Kwity Paye on a unit that will face the daunting AFC West and New England this season. — Mike Wells

Will quarterback Matthew Stafford throw during minicamp? The Super Bowl-winning quarterback told reporters last month he didn’t know whether he would throw passes at minicamp or wait until training camp after he received an injection in his right elbow this offseason. While Stafford has many familiar faces among his pass-catchers — and plenty of chemistry there — the Rams did add wide receiver Allen Robinson II this offseason. — Sarah Barshop

The Derek Carr-Davante Adams connection is worth watching. The two lit up Mountain West Conference scoreboards with Fresno State in 2013, and after Adams was acquired this offseason in a blockbuster trade from the Packers, the reunion is on. The installation of coach Josh McDaniels’ offense will be in its infancy, but it will be paramount to see how far along the renewed chemistry is between Carr and Adams. — Paul Gutierrez

Everyone wants to see how the Vikings will deploy tight end Irv Smith Jr., but he isn’t expected to be cleared for full practice as he rehabilitates a right knee injury. Another element to watch is how the Vikings use their three talented safeties: Veteran Harrison Smith, second-year player Camryn Bynum and rookie first-round pick Lewis Cine. Coaches have hinted all three could be on the field together. Is that possible and, if so, under which circumstances? — Kevin Seifert

Who seems to be leading the offensive coaching staff? Joe Judge is working with the quarterbacks and Matt Patricia is with the offensive line, but the playcaller is TBD. That could ultimately be a factor in what type of jump quarterback Mac Jones makes in his second season. One defensive storyline of note: Who is lining up at inside linebacker now that Dont’a Hightower and Jamie Collins are no longer with the team? — Mike Reiss

It will be interesting to see an extended look at the evolution of the Giants’ offense under coach Brian Daboll and offensive coordinator Mike Kafka. The hope is the pair will help give quarterback Daniel Jones a chance. A bunch of his weapons (wide receivers Sterling Shepard, Kenny Golladay and Kadarius Toney) are not expected to participate because of injuries, but Jones still has running back Saquon Barkley, second-round receiver Wan’Dale Robinson and veteran receiver Darius Slayton with which to work. That should be enough to see if he’s making strides with last season’s 31st-ranked offense. — Jordan Raanan

What else but the quarterbacks? This battle is just getting started. Mitch Trubisky took first team reps throughout OTAs, followed by Mason Rudolph with the second unit and this year’s first-round pick Kenny Pickett with the third. It’s a marathon, not a sprint, though, and the Steelers will be putting all three in game-like simulations throughout the offseason to determine their next starting quarterback. — Brooke Pryor

The quarterback competition between Geno Smith and Drew Lock will start to get more real with the offseason program moving past the voluntary stage. But the two quarterbacks vying to replace Russell Wilson still may not be throwing to DK Metcalf anytime soon. The star receiver is recovering from foot surgery and awaiting a new contract, so it remains to be seen how much — if anything — he’ll do during minicamp. — Brady Henderson

Is quarterback Tom Brady “all in” for 2022? In an interview with TNT during a star-studded golf event called “The Match,” Brady talked about his commitment to football, his family and outside interests. “You know, at this stage, it’s like 55% yes and 45% no. It’s not 100-0. That’s just the reality,” Brady said. “It’s not that I’m not 100% committed, it’s just as soon as I make the commitment to do it, it’s like ‘Ugh. All right, here we go.'” Brady added once he made the choice, he was “100% committed.” But what type of Brady will we see in camp? 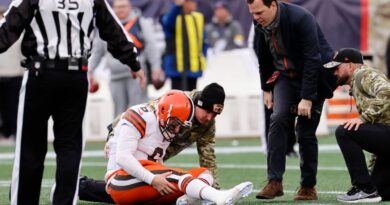 Browns’ Mayfield ‘beat up,’ plans to play vs. Lions 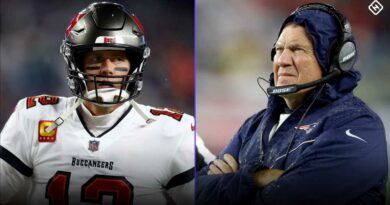 Tom Brady bests Bill Belichick, but the Buccaneers and Patriots both win in their revenge game

Alabama RB Najee Harris on why Megan Rapinoe inspires him: ‘Standing up for what she believes in’