Another week, another season-ending injury for a key player.

On the other hand, one young quarterback is feeling healhy enough to start his comeback campaign. We dive into the top headlines from Monday in this edition of NFL news and notes.

Bradley Chubb out with torn ACL

It doesn’t get much worse for the winless Broncos, but somehow it did Monday when it was revealed the linebacker has a partially torn ACL in his left knee and will miss the rest of the season. Chubb actually returned to Sunday’s game against the Jaguars with the injury, but will now need surgery to repair the damage.

“He felt good enough to come back in and actually, he played that last series pretty damn well,” Broncos coach Vic Fangio told reporters. “He was as surprised as anybody, I think, this morning when he woke up feeling the way he did. It’s a huge loss. He’s one of our better players, obviously. He’s a tempo setter, great player, great person, leader — all that.”

Chubb, Denver’s fifth-overall pick in 2018, had his first sack and forced fumble of the season in Week 4.

Maybe the Raiders linebacker will get the message this time, considering it’s the longest suspension for an on-field act in NFL history. Burfict’s helmet-to-helmet hit on Colts tight end Jack Doyle during Sunday’s game in Indianapolis drew a penalty for unnecessary roughness that resulted in an ejection, and the league was quick to ban him for the rest of 2019.

The 29-year-old Burfict has a long history of illegal hits, and if the season-long suspension is upheld, he will have been suspended for a total of 22 games in his career. Those absences and additional fines incurred will have also cost him more than $5 million in salary.

The Bears quarterback was hurt on the team’s sixth play of the game Sunday when he was hit and fumbled the ball, but will reportedly avoid surgery after an MRI on Monday revealed a dislocated left shoulder with a slight labrum tear.

While a definitive timeline for his return has yet to be determined, the team has faith in backup quarterback Chase Daniel should Trubisky be sidelined for an extended period.

“That’s why Chase is here,” Nagy told reporters. “We’ll prepare for both guys, and I’ll know more (later). Again, our game plan is not going to change a whole lot. If Chase is the guy, we’re going to do things that Chase does well. If it’s Mitch, then we’ll continue to keep doing things with him. I’ll never get to a point where I’m frozen because I don’t know what to do. We’ll just keep growing.”

The Jets quarterback has been out since Sept. 12 with mononucleosis and the team had hoped he would be healthy enough to return after the team’s Week 4 bye, but his availability won’t be determined until later this week.

In the meantime, Jets coach Adam Gase said Darnold’s status remains “up in the air” and he has yet to rule him out. Darnold has not lifted, run or thrown since being diagnosed with the illness, so he’ll ramp up workouts this week but won’t be able to participate in full practice, hinting his return could be pushed back another week.

Another week has come and gone, but the disgruntled cornerback remains on the roster even after requesting a trade. It was reported that Jacksonville had the chance to move on, but wouldn’t settle for a pair of first-round picks offered from an unidentified team.

Ramsey was missing in action last week, first due to flu-like symptoms, then because of a back injury, then he was absent for the birth of his second child. He also missed Sunday’s win over the Broncos, leaving doubt that he’ll play at Carolina in Week 5, though it will depend if he returns to practicce this week.

One video you have to see

Patrick Mahomes will have a tiny little superfan cheering him on Sunday at Arrowhead Stadium. 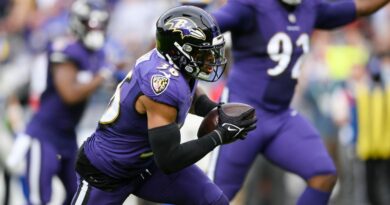 Ravens snag pick-six from Rams’ Matthew Stafford, his fourth of the season 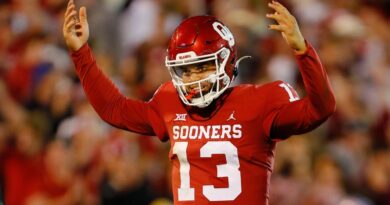 Breaking down the College Football Playoff path for each top contender

Gary Kubiak will not be Broncos' offensive coordinator