Week 13 of the NFL regular season was a pretty good one for underdogs. The undefeated Pittsburgh Steelers fell to the underdog Washington Football Team in the biggest surprise of the week while Washington’s NFC East counterpart, the New York Giants, upset the Seattle Seahawks as 10-point underdogs despite starting backup QB Colt McCoy in the game. Meanwhile, the New England Patriots absolutely demolished the slightly-favored Los Angeles Chargers 45-0 in the most lopsided score of the year so far.

Heading into Week 14, the landscape of the NFL is a bit different after these surprising results, and sportsbook spreads are showing that. There have been some line movements already in favor of the three underdogs that won, and those victories are having a big impact on best bets for people gambling on the NFL or playing in picks against the spread office pools. It’s always important to watch these line movements, which tend to reflect recent performances and key injuries, and try to capitalize when a line moves too much or not enough.

The biggest storylines this week, as always, concern quarterbacks. The Giants-Cardinals game will be heavily impacted by Daniel Jones’ potential return from a hamstring injury. For the Jaguars, backup QB Mike Glennon will look to keep covering the spread after managing to do so in each of his first two starts this year. COVID-19 will also have an impact on this week’s games, as the Panthers have numerous players on the COVID list that will be questionable including two of their top three receivers, D.J. Moore and Curtis Samuel. If they are without any number of starters, the line for their game against the Broncos could change in short order, so people looking to bet that game may be best served to wait and see what happens there.

For more expert NFL predictions, check out Sporting News’ picks straight up and against the spread for Week 14.

Below are the latest Week 14 NFL odds, including point spreads, money lines and over-under totals for every game, according to the DraftKings sportsbook.

The Eagles have benched Carson Wentz and are hoping some time off will help the struggling passer, who has thrown a league-high 15 picks and been sacked a whopping 50 times, to regroup a bit. As a result, they’re throwing second-round rookie Jalen Hurts into the fire. His first career start will come against the NFL’s top-ranked defense. The Saints have allowed just 288.8 yards per game this year and have allowed 16 or fewer points in their last five games. They should be able to give Hurts fits with their solid pass rush. Meanwhile, on offense, Taysom Hill has proven to be efficient and should be able to take advantage of the Eagles’ porous back-seven. This could be a blowout for the Saints, as Hurts may endure some growing pains against such a great defense, so the Saints feel like a safe bet to win big here.

The Chargers got blown out by the Patriots last week at home 45-0, so this may seem like a strange pick at first. However, nine of their 12 games this season have been decided by single-digit points, so that type of loss was an aberration for the team. They should bounce back in a much more favorable matchup, as the Falcons have some exploitable holes on their defense. They lack a quality pass rush and have a fairly weak secondary, so the Chargers should be able to move the ball and score a lot. They’ll let up some points to the Falcons in this one too, but it should be close and the Chargers could win. We’ll take the points here, especially since the Chargers should be motivated to prove that their team is a lot better than their blowout loss in Week 13 indicates.

There’s a lot to like about the Bucs in this matchup. They’ve had a bye week off to rest and get healthy, and Tom Brady is 14-4 straight up coming off a bye, meaning the Buccaneers are likely to win this game. The Bucs also lost before their bye week and during his career, Brady is a remarkable 46-21 against the spread after a bye. Couple those trends with the fact that Dalvin Cook might struggle to run the ball on the Bucs’ top-ranked run defense, and the Bucs should have a chance to win this one handily. Betting on them to win by a TD seems like a good investment. 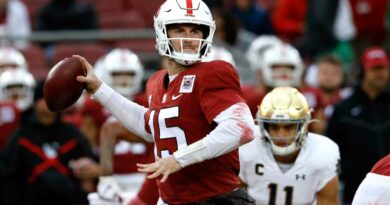 Opinion: QB Davis Mills needs time, stability to reach potential, and he won’t get it with Texans