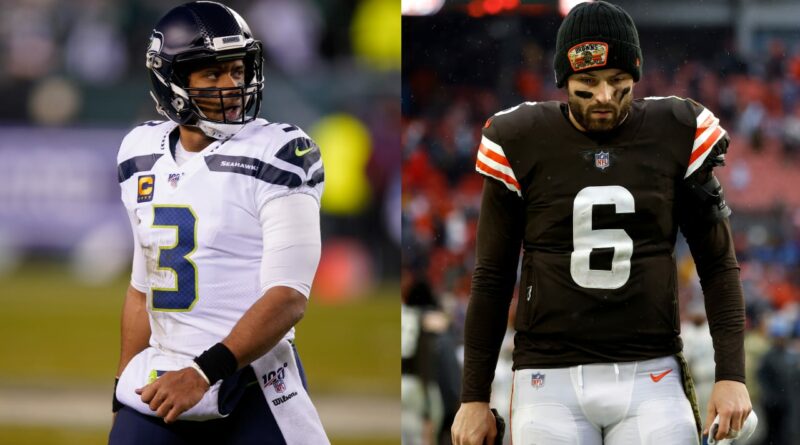 There are quite a few teams at a crossroads following Week 11 — including some that, though they are still technically in the race, look dangerously close to stumbling out of the playoff picture. Like, for example, the Seattle Seahawks (3-7) and Cleveland Browns (6-5), who are failing to live up to high expectations, especially on offense, coming off postseason appearances in 2020.

The Seahawks’ star-studded group, featuring Russell Wilson, DK Metcalf and Tyler Lockett, has fallen short for much of this season, ranking 30th in the league in total yards and 24th in scoring offense. Losing Wilson for a month due to a broken finger didn’t help, but he hasn’t played well in his return over the last two weeks.

Like the Seahawks, the Browns looked loaded with big hitters to start the season, boasting QB Baker Mayfield﻿, a two-headed backfield featuring Nick Chubb and Kareem Hunt and a slew of talented wide receivers, including Odell Beckham and Jarvis Landry﻿. Now, though, it’s Thanksgiving Week, and the offense is just managing to stay afloat, with Mayfield, Chubb, Hunt and Landry all missing time at various points in the season due to injury (and, of course, with OBJ playing for the Rams). Over their last five games, the Browns have scored 20 points or more just once, a 41-17 throttling of the Cincinnati Bengals.

With their seasons hanging in the balance over the next few weeks, it’s fair to wonder if these two offenses can be fixed. Or are they broken beyond repair?

To me, these units are headed in very different directions. Let’s take a closer look:

One offense that CAN be fixed

Mayfield is playing through multiple injuries — a torn labrum in his left shoulder, a fracture to that same shoulder and knee and foot issues — and is as beat up as he’s ever been. Over the last two weeks, in which the Browns narrowly beat the Lions and got crushed by the Patriots, Mayfield has completed just 52 percent of his passes for 249 yards, two TDs, three picks and a 54.5 passer rating. It’s not great — but what gives me optimism is the team’s ground-and-pound approach.

We should expect Chubb and Hunt, who’s expected to be back at practice this week and has a chance to play against the Ravens on Sunday after missing the past five games with a calf injury, to jump-start the offense as the weather gets colder. The Cleveland attack has always relied on the run game under head coach Kevin Stefanski — that was what helped the Browns break their playoff drought last season. The second-year coach is as good as offensive play-callers come, in terms of formations and designing run plays to set up chunk plays off play-action and bootlegs in the pass game. So it doesn’t necessarily matter whether an ailing Mayfield or journeyman Case Keenum (who I made a case for playing over Mayfield several weeks ago) is under center. This offense is built to succeed in spite of the quarterback. As it starts to round into form behind Chubb and Hunt, it will help put the Browns, who currently sit last in the AFC North, in the mix for a playoff spot.

One offense that’s broken beyond repair

In theory, the Seahawks’ offense, under first-year coordinator Shane Waldron, is supposed to look like the Browns’. But this unit is having a bit of an identity crisis. The Seahawks are built for an outside zone run scheme, with Wilson being a huge threat on the ground, and with an offensive line that’s built to move laterally. But with injuries to the backfield (SEE: Chris Carson and Rashaad Penny) and Wilson hampering the rushing attack (which is ranked 23rd in the NFL), they aren’t able to run the ball effectively enough to set up the play-action game. On top of that, there’s been a disconnect between the run and pass games, as the Seahawks are having Wilson drop back far too much (which is to say, letting Russ cook) with a coordinator who isn’t dialing up consistent offense for his QB. It doesn’t matter if you have great receivers like Metcalf or Lockett — if the scheme isn’t aiding the quarterback or juiced with enough creativity, there will be issues. And that’s what we’re seeing.

The result? Wilson has lost the last two games and has yet to throw a touchdown pass since returning from injury. The entire unit has failed to find any sort of rhythm or balance.

With the Seahawks’ offense at odds with itself, all parties involved must take a step back and get on the same page. There’s no room for error at this stage — and even then, it might be too late in the season to really make a difference.

Each week in the 2021 campaign, former No. 1 overall pick and NFL Network analyst David Carr will take a look at all offensive players and rank his top 15. Rankings are based solely on this season’s efforts. The Week 12 pecking order is below.

Despite the loss to Minnesota, Rodgers had a near-perfect performance. His 148.4 passer rating was the highest of his career against the division rival and his sixth-highest overall. With Rodgers playing at an MVP level and other quarterbacks around the league floundering, Rodgers recaptures the top spot.

Brady was gifted a home game coming out of the bye against an inconsistent New York Giants team to help the Bucs get back in the win column after losing two straight. The Bucs improved to 5-0 at home with Brady throwing 20 TDs to just three INTs in those games. However, Brady’s play on the road (nine TDs, five picks) has led to a 2-3 away record, and with a game vs. a confident Colts squad in Indy up next, Brady must be better.

Credit the Colts’ defense for keeping Allen off his game Sunday. He struggled in the loss in posting a 60 percent completion rate, 227 combined pass and rush yards and a 72.2 passer rating — a sizable decrease from how he’s played in Weeks 3-10, in which he ranked in the top three in the NFL in each of those categories. The Bills’ offense has been somewhat humbled over the last month and it’s really poor timing with with the Saints, Patriots, Bucs and Panthers on tap.

Prescott and the Cowboys ran into a red-hot Chiefs defense, putting up season lows in points (nine) and total yards (276). Prescott sure missed Amari Cooper (COVID-19) — and CeeDee Lamb (concussion) in the second half — but more than that, Dak looked off most of the day, throwing slightly behind or in front of his receivers. As a result, he had one of his worst outputs of the 2021 season (0:2 TD-to-INT ratio and a 57.9 passer rating).

There were questions about whether the Colts could upset a 6-3 Buffalo Bills squad on the road, and Taylor put them to rest by taking matters into his own hands Sunday, scoring three first-half rushing touchdowns AND five total in the Colts’ 41-15 win. Mo Alie-Cox said he looked like a superhero during one score, and that’s exactly what the second-year back has been during the team’s hot streak. Some even say he’s entering the MVP conversation, which feels a little premature but not if he continues playing like he is.

Kupp enjoyed the bye week atop the league receiving ranks, leading all players in receptions (85), receiving yards (1,141) and receiving touchdowns (10, tied with Mike Evans) this season. He’s on pace for 1,940 yards this season, which surpass Hall of Famer Calvin Johnson‘s record mark of 1,964 (2012, with Matthew Stafford as his QB). Foreshadowing? Maybe.

The Vikings built a two-score lead midway through the third quarter, but it was quickly erased with back-to-back TD connections between Rodgers and Adams, who put on a clinic against a below average Vikings secondary. Adams finished with seven catches for 115 yards and two scores, giving him 12 career TD receptions vs. Minnesota (most by any player all time).

The minute Jefferson walked into U.S. Bank Stadium rocking a Randy Moss shirt, you kind of sensed something special was going to happen. And man, did it ever! The second-year pro was electric in the Vikings’ win, trading big plays with Davante Adams on the way to eight receptions for 169 yards and two touchdowns. That effort gave Jefferson 11 career games with at least 100 receiving yards, tying Moss and JuJu Smith-Schuster for most such games in a player’s first two seasons in the Super Bowl era. He’s now eyeing Odell Beckham‘s record (15) with seven games left.

This is a fun fact: With a 27-yard touchdown reception in Sunday’s loss, McCaffrey’s 57th career game, he is the fastest running back to reach 3,000 receiving yards since 1970, accomplishing the milestone in nine fewer games than second-fastest Alvin Kamara (66 games). This speaks to McCaffrey’s efficiency and his value to the Panthers’ offense, a unit that should improve as Cam Newton gets more reps.

The Raiders have lost three straight and Derek’s late-game turnovers proved to be the nail in the coffin in Sunday’s loss to the Bengals. Derek and the Raiders need to find some consistency if they want to make a playoff push down the stretch.

There are two things I know about Mike Evans. He always seems to be limping or banged up or playing through some nagging injury. And, he will get the job done — he’s done that now for eight seasons. On Monday night against the Giants, Evans caught his 10th TD of the season (now tied with Kupp), the 72nd of his career which passed Bucs great Mike Alstott for the most receiving TDs in team history.

Kelce capped off the Chiefs’ nine-play, 86-yard opening drive with a 4-yard rush TD out of the wildcat formation. He became the first tight end in NFL history with 50-plus receiving TDs and multiple rush TDs; of the 14 other TEs with at least 50 receiving TDs in the Super Bowl era, only Rob Gronkowski has one rush TD. The Chiefs were held to 19 points in the win over Dallas, but it feels like they are closer and closer to returning to old form with each passing week.

Chase has cooled off over the last three games with under 50 receiving yards in each contest. However, he’s still plenty effective as he demands attention and opens the field for others in the pass game and the Joe Mixon-led rushing attack. He also was effective in the red zone against the Raiders with a 6-yard TD reception — his eighth rec. TD of the season (leads all rookies).

The Rams’ bye week comes at the perfect time, allowing Stafford and the offense to regroup for the stretch run. He’s struggled a bit of late after an impressive first eight games of the season.

He’ll be challenged right out of the gate against the Packers this weekend. I’m hopeful the veteran QB can turn things around.

I’ll keep this one brief. The Ravens got the job done with Jackson, who missed Sunday’s game due to an illness, but they won’t be playing the Bears every week. The MVP candidate needs to be available.