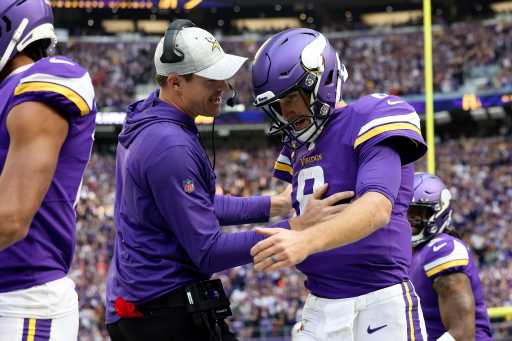 Kupp half empty: There are Super Bowl hangovers and then there are the Rams. Yikes. Maybe draft picks are like electrolytes in this metaphor and Los Angeles’ vulgar disregard for them is making the headache worse. Now Sean McVay’s team has to go forward without all-world wide receiver Cooper Kupp, too, after he landed on injured reserve with an ankle injury. They’re a three-point road underdog to 3-7 New Orleans this weekend. Neither the Rams nor Denver may be feeling very merry by the time they meet at SoFi Stadium on Christmas Day.

Bay Watch: The 49ers since trading for Christian McCaffrey have three of their five best total-yardage outputs of the season and last week put together their best rushing day since Week 2. McCaffrey himself is averaging 18 touches and 96 yards per game, has scored three touchdowns and thrown for another. Long way to go, but San Francisco with he and Deebo Samuel on offense look like a force to be reckoned with going forward.

Pack not back: Green Bay knocked off Dallas and had a home Thursday night game to get itself right back into the NFC Wild Card picture. Instead of taking care of business against Tennessee, however, the Packers mostly looked rough on offense and bad on defense and fell to 4-7. Aaron Rodgers missed throws he normally makes in his sleep. About the only good thing? Maligned rookie wide receiver Christian Watson has five touchdown grabs in his past two games. Who will he be catching them from next year?

Snow contest: Six inches of snow can make a mess of a commute. Six feet, apparently, gets you sent to Detroit. That’s the case for Buffalo this week. The NFL moved its game to Ford Field in the face of a historic snowfall forecast for a notoriously snowy city. The Bills, as it happens, also play at Detroit on Thanksgiving Day, so perhaps they’ll just spend the week in the Motor City. Now that is a lake effect.

West control: For all that offseason talk about how the AFC West was going to dominate, it hasn’t materialized. We’re in Week 11 and Kansas City can put the division even further into its vice grip with a win against the Chargers in Los Angeles. With a win to get to 8-2, Patrick Mahomes and company would hold a three-game lead over L.A., a season sweep of the Chargers and have three games remaining against the struggling Broncos and Raiders.

Wilson vs. Jones: Who would have thought that a pivotal game in the AFC East would pit Mac Jones against Zach Wilson? The 5-4 Patriots host the 6-3 Jets this weekend in a game that has playoff implications. New England currently sits in last place but a win puts them right back in the thick of things. The Jets can keep pace with first-place Miami with a win. That’s a real sentence. Robert Saleh’s group is 4-0 on the road this year. Impressive stuff.

Game of the Week

The Vikings showing up in this spot back-to-back weeks? That’s the kind of season it’s been for rookie head coach Kevin O’Connell — remember, he also interviewed for the Denver job — and the Vikings. After about as wild a finish as you’ll see in an overtime win against Buffalo last week, Minnesota hosts the Cowboys. Dallas, of course, blew a 14-point, fourth-quarter lead against Green Bay its last time out. The Vikes are right in the mix for the No. 1 seed now and picking them to win is as sure an indication as any that they won’t.

Lock of the Week

Weird stuff happens all the time in the NFL, but the Ravens are sitting pretty. Lamar Jackson and company are not only two-touchdown favorites over the Panthers, but they don’t have a team that currently sports a winning record on their schedule until Cincinnati the final week of the regular season. In five of those six, ESPN’s Football Power Index gives Baltimore a 78% chance or better of winning.

Upset of the Week

The Bears have lost three straight since trouncing the Patriots, but they’ve scored points and unlocked the running prowess of quarterback Justin Fields over the past month. Chicago’s scored at least 29 points in each of its past four games and in that span Fields is averaging 117 rushing yards per game and has scored five times on the ground. His team enters as a three-point underdog. Guessing Fields will look fast on the turf in his home state. 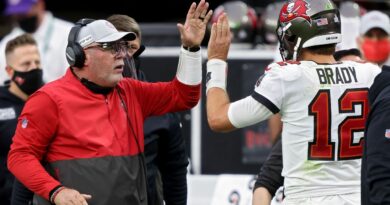 Brady: Everyone wants to win for ‘loyal’ Arians