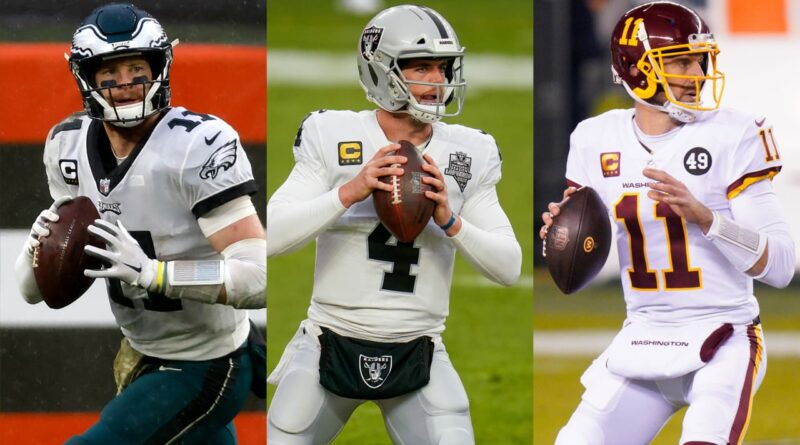 The quarterback carousel has already begun to spin, with Matthew Stafford and Jared Goff giving it a big push late last week.

Before Super Bowl LV kicks off tonight, the week in Tampa has been filled with chatter about where Carson Wentz will end up.

It seems everyone wants a quarterback or is willing to upgrade. The Bears, Colts, 49ers, Panthers, Washington, Patriots, Jets and Broncos are among those who have at least placed a phone call regarding a QB.

With that in mind, let’s take a look at where things stand with the QBs, based on conversations with sources around the NFL:

Where will Carson Wentz end up? From the moment new Eagles coach Nick Sirianni refused in his introductory news conference to guarantee that Wentz would be on the roster in 2021, the scramble for Wentz’s new home began. While Philly is more than open to keeping him, it does appear that trading the former franchise QB is the more likely option. The Eagles have received significant interest, and quarterback-needy teams like the Colts and Bears are among several who have called general manager Howie Roseman. The Eagles may not get the haul the Lions did for dealing Stafford, but it should be significant.

Who will the Saints starting QB be? Drew Brees hasn’t announced it yet, but this week’s contract maneuver further solidified that he’s moving to the next phase of his life. He’s retiring. So, who is next? When it became clear that Stafford and Goff were available, it was noteworthy that Sean Payton’s Saints called on neither. Barring a potential draft option, it appears that Payton is set to go into the season with Jameis Winston and Taysom Hill as his top two QB options. Winston is a free agent, but there is mutual interest in his return. Assuming he re-signs, Winston appears to have first crack at winning the starting job, as the team will see for real the improvement they saw in practice every day.

Will the Raiders trade Derek Carr﻿? For the last few years, the answer has been a firm no. That may not be the case now. Teams have been calling the Raiders to gauge interest in trading for Carr, and at least right now, the team appears open to considering it in some form or fashion — as long as it can replace him with someone on the same level. In reality, teams believe Las Vegas is open to dealing one of two QBs — Carr or Marcus Mariota﻿. Guaranteeing Nathan Peterman $1 million in 2021 was a sign they could part with another QB. Will someone make them an offer good enough?

Who will be Washington’s QB? When Alex Smith decided he needed a few weeks to figure out his future, the Washington Football Team knew it could not wait. While the team is open to a return for Smith, it also made calls on Stafford and Goff before they were traded. Expect them to weigh all QB options, including if Sam Darnold is made available. While plenty of teams have been calling the Jets on Darnold, there’s been no indication they would trade him. Yet.

What’s happening in San Francisco? The 49ers are expected to bring back ﻿Josh Rosen﻿. Rosen, who spent most of this season on the Bucs’ practice squad, was an exclusive rights free agent, so it was up to the team to tender him an offer. They’ll officially do that soon.