Amid uncertainty regarding his future in Chicago, Robert Quinn is staying away from the Bears.

The edge rusher is not expected to be present for Chicago’s mandatory minicamp, which begins Tuesday, NFL Network Insider Ian Rapoport reported, per a source. Quinn is instead training on his own.

Bears head coach Matt Eberflus said to the media after practice Tuesday that Quinn’s absence was not excused, though he’s been talking to the edge rusher throughout the offseason.

“We’re not talking about that as an organization,” Eberflus said. “Obviously we’d hoped he’d be here. He’s not.”

Quinn has not shied away from acknowledging his time in Chicago might be finished. Just a couple of weeks before his 32nd birthday, Quinn told reporters he hoped his resume “gives me a little weight to keep my foot in the building” before admitting “it’s a business.”

His absence isn’t a complete surprise. On the same day Quinn made his comments regarding his future, Rapoport reported teams were “sniffing around on him for a possible trade” just before the start of the 2022 NFL Draft.

Quinn remains a Bear for now. He brings with him excellent production, finishing with the second-highest sack percentage among all pass-rushers in 2021, but his age and compensation might not fit with the Bears’ new roadmap. Chicago has a new head coach in Matt Eberflus and a roster that has seen significant turnover toward younger players, with the Khalil Mack trade standing as the most notable sign of a franchise turning the page toward the future.

As Chicago continues offseason practices, Quinn will await new information on his future. He’ll do so away from Halas Hall. 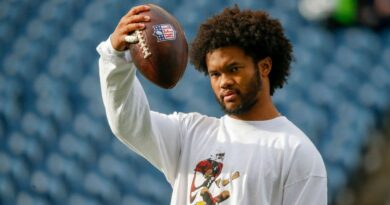 NFL Week 13 fashion: Kyler Murray is back in style