49ers coach Kyle Shanahan told reporters Tuesday that the pass rusher is expected to come in for a physical this week after which the team will part ways with him.

“He’s been excused from minicamp,” Shanahan said. “But no, he’s not doing anything with us.

“I know that we’ve gotten a good bill of health from his doctors. … We’re going to check him out with our physical. We do not expect him to be on our team.”

Ford, 31, has played in just seven games combined the last two seasons, missing most of last year with back and neck injuries. The pass rusher has one year left on his deal after agreeing to three contract restructures in the last three years. Ford initially joined San Francisco via trade in 2019 and signed a five-year, $85.5 million extension through 2026 with the club.

If the 49ers cut Ford following his physical, which Shanahan indicated is a likelihood, San Francisco will carry a $5.8 million dead cap hit into 2022 and save $1.1 million.

In his three seasons with San Francisco, Ford has played in 18 of a possible 49 regular-season games and recorded 9.5 sacks. In 2018, his final year in Kansas City, Ford had a career-high 13 takedowns. 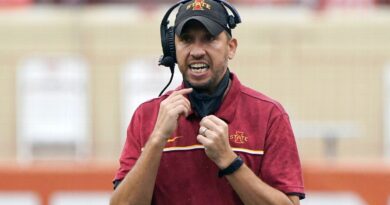 John Johnson’s bath ritual ‘weird’ to some, but working for Rams