The NFL announced on Wednesday that talks have begun on whether to resume Week 17’s Bills-Bengals game, which was postponed after Bills safety Damar Hamlin suffered a cardiac arrest during the first quarter of the game.

During a conference call with reporters on Wednesday, NFL EVP of communications, public affairs and policy Jeff Miller said the league has not made a decision on the status of the game but plans to in the coming days, adding that both the Bengals and Bills would be consulted.

NFL EVP of football operations Troy Vincent said during the call that “everything is being considered” regarding the Bills-Bengals game. Vincent said the league will lean on the guiding principles it used during the 2020 and 2021 seasons with the COVID-19 pandemic, including the “value of winning and winning percentage” in order to give Commissioner Roger Goodell suggestions on how to proceed if the game were not to be resumed.

According to NFL Research, the following playoff-clinching scenarios are in play if the Bills-Bengals game is canceled:

The Bills, who announced Wednesday afternoon that Hamlin remains in critical condition with signs of improvement, returned to practice earlier in the day for the first time since the harrowing incident. They are scheduled to host the Patriots on Sunday at 1 p.m. ET. NFL Network Insider Tom Pelissero reported Wednesday there is no discussion of not playing the game as scheduled.

The league also confirmed the full Week 18 schedule on Wednesday, including the official start time for the Ravens-Bengals game (1 p.m. ET), which had previously been undetermined.

Jerry Jones: ‘No,’ Cowboys HC Mike McCarthy’s job is not at stake vs. Buccaneers 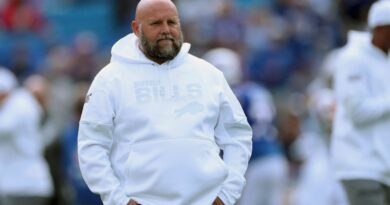