The 2021 NFL season is into double-digit weeks and past the midpoint of its new 17-game schedule. That makes it a perfect early time to check in on the updated standings and what the playoff picture is looking like ahead of Week 10’s Sunday action.

The league kept its expanded playoff field, with 14 of its 32 teams (43.8 percent) set to qualify for the latest postseason. That includes 7 each from the AFC and NFC, with only the No. 1 seeds getting byes on top of home-field advantage.

Who would be in, who’s still in contention, and who should be thinking about next season? Here’s a comprehensive look:

1. Tennessee Titans (7-2), first place, AFC South. The Titans have key wins over the Bills and Chiefs to build up their strong conference record, with only a loss to the Jets. Their other loss was to the Cardinals. Should they fall to the Saints, they would fall a half-game behind the Ravens. Remaining strength of schedule: .353

2. Baltimore Ravens (7-3), first place, AFC North. The Ravens failed to keep pressure on the Titans by being shocked by the Dolphins on Thursday night. They have key AFC wins over the Chiefs and Chargers but also lost to the Raiders and Bengals. The key for them holding a strong non wild-card position is winning more in the tough AFC North down the stretch. Remaining strength of schedule: .600

3. Los Angeles Chargers (5-3), first place, AFC West. The Chargers have bolted into the surprise division lead by virtue of wins over the Chiefs and Raiders. Brandon Staley is a coach of the year front runner as Year 2 with Justin Herbert has been fortuitous. They need to keep up the strong AFC West play in the second half.  Their lead is a tiebreaker over Las Vegas and only a half-game ahead of Kansas City and Denver. Remaining strength of schedule: .474.

4. Buffalo Bills (5-3), first place, AFC East. The Bills were thrilled when they beat the Chiefs to get to 5-1 but have lost tough games to the Titans and Jaguars to follow up their Week 1 home loss to the Steelers. Beyond falling to this seed, that’s dwindled their division lead over Patriots to only a half game. Remaining strength of schedule: .487

5. Las Vegas Raiders (5-3), second place, AFC West. The Raiders fell out of first place after being upset by the Giants in Week 9. Their playoff chances would take another big hit should they lose the big game to the Chiefs at home on Sunday night. They are hoping to avoid another bad fade like last season. Remaining strength of schedule: .538

6. Pittsburgh Steelers (5-3), second place, AFC North. The Steelers are hoping to stay right behind the Ravens in their chase for a second straight division title. They have wins over the Bills, Browns and Broncos but lost to the Raiders and Bengals. Remaining strength of schedule: .553

7. New England Patriots (5-4), second place, AFC East. The Patriots have rallied to get above .500 and keep the Bills from running away with the division again. They have a key wild-card implications game against the Browns in Week 10. They have only key conference win over the Chargers. Remaining strength of schedule: .500

The Chiefs are well positioned to make a run and can take control of the AFC West again despite their slow start, given the logjam and plenty of division play left. The Browns also can make up ground quickly in the AFC North again, too. The Bengals and Broncos are bound to fade and the Colts might have dug themselves too big of a hole to return as a wild card.

Who’s set to be out?

There’s no surprise here, save for the major dropoff for the Dolphins. The Jets and Jaguars need to see more out of their rookie first-round quarterbacks in the second half.

NFL PICKS WEEK 10: Straight up | Against the spread

1. Arizona Cardinals (8-1), first place, NFC West.  The Cardinals have rolled over their first-half schedule, save for the Week 8 loss at home to the Packers, the team right behind them. They also have a key road win over the Rams already in the division. Remaining strength of schedule: .441

2. Green Bay Packers (7-2), first place, NFC North. The Packers did beat the Cardinals but lost to the Saints among contenders. They don’t need to worry about the division again and would love to put the playoff path through Lambeau Field. Remaining strength of schedule: .448

3. Tampa Bay Buccaneers (6-2), first place, NFC South. The Buccaneers don’t want to fall to a wild card again and need to worry about finishing ahead of the Saints, to whom they lost in Week 8. They still are a strong threat to finish as a top-two seed to make their Super Bowl repeat path a little easier. Remaining strength of schedule: .434.

4. Dallas Cowboys (6-2), first place, NFC East. The Cowboys fell here after their shocking home loss to the Broncos, missing a big Week 9 chance with the Packers losing and the Bucs idle. They are still in great shape to run away with the division. Remaining strength of schedule: .487

5. Los Angeles Rams (7-2) second place, NFC West. The Rams are a full game and tiebreaker behind the Cardinals after their Week 9 home loss to the AFC’s Titans. They are in strong shape for at least this seed and will keep pushing for the division title with another game vs. Arizona left. Remaining strength of schedule: .530

6. New Orleans Saints (5-3), second place, NFC South. The Saints have some big NFC wins on their resume over the Packers, Buccaneers and Seahawks. The conference is weak enough to at least fall back on this seed or No. 7 behind with the Bucs, with a fair shot at repeating in the division. Remaining strength of schedule: .513

7. Atlanta Falcons (4-4), third place, NFC South. The Falcons haven’t played all that well but they keep adjusting well with rookie coach Arthur Smith. Their only notable NFC win so far was against the Saints on the road last week. Remaining strength of schedule: .486.

The Panthers are pretty much done with their ugly quarterback situation. The Vikings, who beat the Panthers and Seahawks, can still make a run to a wild card should they figure out how to win more close games. The Seahawks are dangerous with Russell Wilson back and the 49ers can’t be counted out to rally. The Eagles and Giants have only a desperate wild-card path. The Bears are hanging on by a thread.

Who’s set to be out?

Washington won’t be repeating in the NFC East and is fading badly for any wild-card hopes. Put the Lions on winless watch for the rest of the season after their bye. 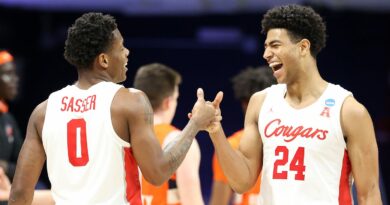 Barnwell: 10 players and coaches who took a step toward Super Bowl redemption 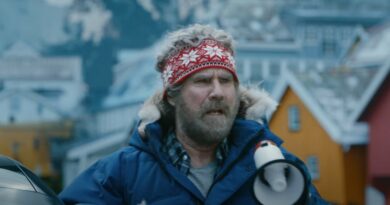