A SEASON of misery has gone from bad to worse for the Jacksonville Jaguars ahead of their Week 8 clash against the Philadelphia Eagles.

Tipped to be one of the best teams in the American Football Conference, they won their first two games before losing four of their next five.

The team travelled across to London for their next game at Wembley Stadium to take place on Monday morning at 12.30am (AEDT).

Given an off day on the Friday before the game however was when trouble struck for four members of the team.

The incident reportedly happened in the early hours of Saturday morning.

Trouble flared after four players were accused of trying to leave the London Reign Showclub without paying their tab of $90,000.

A source said “It was the West End equivalent of King Kong meeting Godzilla.” As the players reportedly squared up to bouncers.

A group of players and staff attended the private members club, which features burlesque and circus performers.

They sank champagne, starting at $812 bottle, and vodka.

“The total bill was in the region of $900,000 and some of the lads tried to leave the club but were prevented from doing so by security,” the source stated.

“Things got pretty heated and there was a lot of swearing and shouting and things became physical. In terms of preparation for their match, you couldn’t think of anything worse.”

Four men in their 20s were arrested for fraud by the Met Police. They were released after nine hours in custody.

The team released a statement following the arrests and later discharge of the four players who were eventually named by NFL.com’s Ian Rapoport as Barry Church, Ronnie Harrison, D.J Hayden and Jarrod Wilson.

“We are aware that four of our players were detained over restitution of a bill. The matter is being resolved and the players are with the team. Any discipline will be handled internally,” the team statement read.

The four Jaguars players arrested for an incident in London were – Barry Church, DJ Hayden, Jarrod Wilson and Ronnie Harrison. The team has released a statement saying they will handle the matter internally

Jaguars players goin’ to the club the night before the game? Smh boys trippin’

Jaguars seem to have a serious culture issue: Jalen Ramsey yapping constantly, players fighting in camp and in locker room last week, and now fighting in a London bar. Winning won’t fix this

The players were reportedly sent bottles of champagne and high-end liquors believing they weren’t going to be charged, per Ian Rapoport.

When the bill arrived was when the issues began however, it is understood the club dropped any complaints after the bill was settled.

— with AP and The Sun 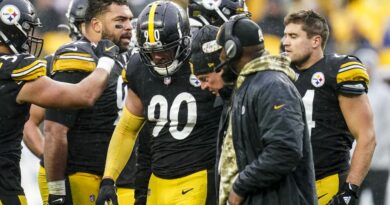