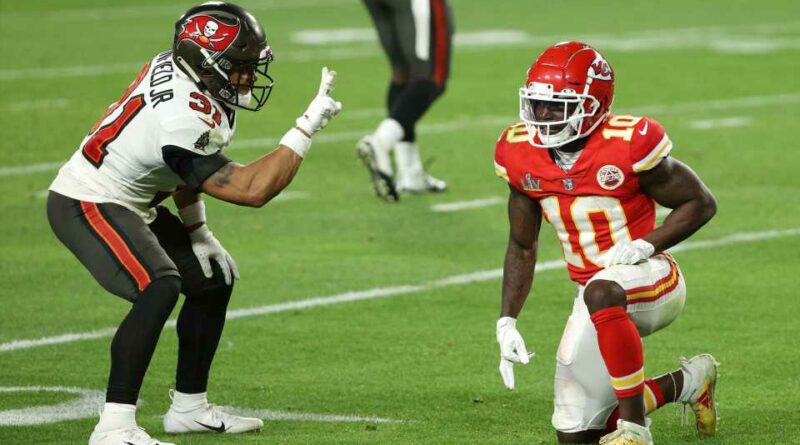 As it turns out, you shouldn’t flaunt it if you got it. At least, not if you’re an NFL player.

The NFL is shifting back into “No Fun League” mode, with the league’s competition committee deciding that taunting should be an emphasis from officiating crews entering the 2021 season. While taunting has always been on the books as a 15-yard penalty, this year we could see more flags fly for players talking a little smack to one another.

Here’s what you need to know about the league’s rule and its enforcement entering this season:

The rule for taunting hasn’t been changed, per se. NFL officiating crews are just going to place an emphasis on taunting in the 2021 season, meaning: No more flexing on your opponent after a big run, no more excessive trash talk on the field and, potentially, no more Tyreek Hill deuces thrown up on a big play.

The rule change may have been spurred by Antoine Winfield Jr., who, in Super Bowl 55, taunted Hill by throwing up Hill’s signature peace sign in the closing stages of the blowout.

“We saw an increase in actions that clearly are not within the spirit and intent of this rule and not representative of the respect to opponents and others on the field,” the NFL said in an August statement.

Giants owner John Mara, who sits on the NFL competition committee, explained the decision to propose the change to NFL owners:

That’s something we discuss every year in the competition committee, we get kind of sick and tired of the talking that does go on from time to time on the field. We try to balance the sportsmanship with allowing the players to have fun. There’s always a fine line. None of us like to see that. It’s just a question of whether you can have rules that can be enforced without taking the fun out of the game, too. Nobody wants to see a player taunting another player. I know I certainly don’t. I know the rest of the members of the competition committee feel the same, too.

McKay said earlier the rule was actually broached by the NFLPA, which seems odd.

“Taunting is trying to entice that other player into some type of activity that is not allowed in football,” McKay said. “So this year, the first issue brought to us by the NFLPA was that there was too much player-on-player taunting activity, and there was too much in your face.”

Traditionally selected by the commissioner, the competition committee suggests rule changes for owners, who have to vote on the rules before the start of the new season.

As has been the case for taunting, players who taunt are hit with an unsportsmanlike conduct penalty, good for 15 yards. The NFL hasn’t changed the rule or its on- or off-field penalties for taunting, just furthering stricter enforcement of the rule for this season and the ones that will follow.

The NFL rulebook defines taunting under the unsportsmanlike conduct umbrella as the following:

“Using baiting or taunting acts or words that may engender ill will between teams.”

If a single player has been hit with multiple taunting penalties, than he will be automatically disqualified from the game. The player is also subject to other penalties, including fines and suspension, should the actions warrant attention from the commissioner’s office.

Difference between taunting and excessive celebrations

The NFL defines taunting as a deliberate act to another player, while excessive celebration is a celebration after a play that isn’t aimed towards the opposing players.

Taunting in the preseason

As is the case with preseason, NFL officiating crews like to set the standard for penalties for the regular season, meaning some harsher enforcements in the early goings of the games.

While Saints’ Jalen Dalton, Ravens’ Chris Westry both were slapped with taunting penalties during the preseason, Colts running back Benny LeMay was made the poster child for the new taunting rules. LeMay was assessed a 15-yard penalty after he took the defense for a ride for 14 yards, with the call catching the ire and the disdain of NFL fans and media members alike.

Each player was fined $3,667 for the taunting call, which is roughly half of their training camp paychecks.