The Patriots may be looking to add another wide receiver, and he’s reportedly a target.

In the immediate aftermath of another Denver loss on Sunday, Thomas was asked whether he thought he would be traded.

New England has discussed potentially dealing for Thomas, according to a report from NFL Network, which cites unidentified league sources. The team has “been active on the trade front” ahead of Tuesday’s deadline, the report says.

Thomas played for New England offensive coordinator Josh McDaniels when he was the head coach of the Broncos in 2010.

Multiple league sources confirm the #Patriots have been active on the trade front for weeks. That’s not abnormal for them. One name that’s been discussed is #Broncos WR Demaryius Thomas. Thomas was drafted by Pats OC Josh McDaniels when he was HC at Denver.

The defending champion Eagles are another playoff-hopeful team that lack dept at wide receiver and could target Thomas.

Thomas, 30, finished play Sunday with 36 catches for 402 yards and three touchdowns in eight games in 2018.

The four-time Pro Bowl player has spent his entire nine-year career in Denver. He has caught 60 touchdown passes in 125 career games.

New England acquired wideout Josh Gordon from the Browns in exchange for a late-round draft pick in mid-September.

The Patriots will face the Bills in Week 8 action Monday. They’ll enter that game with a 5-2 record. 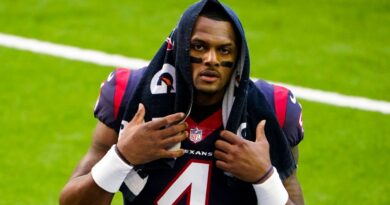 Lawyer: Now will be 12 lawsuits against Watson