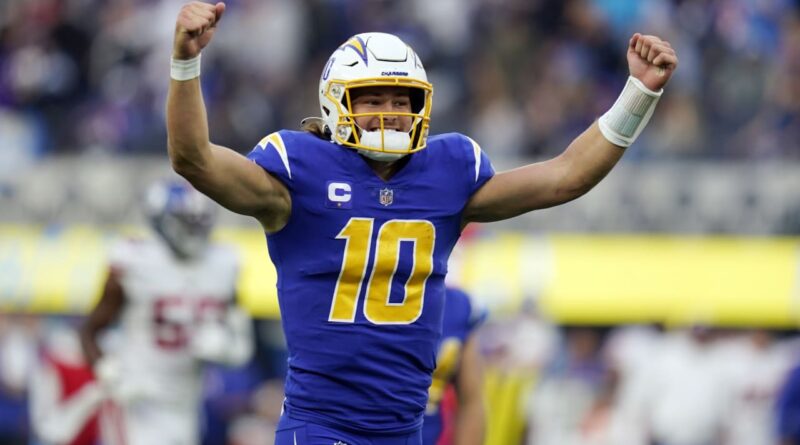 Itching to watch an underdog try to overcome the odds or triumph against adversity? Simply looking to pass the time reading another NFL.com article while stuck in your cube? Marc Sessler offers a bead on five us-against-the-world scenarios to track entering Week 15 of the 2021 NFL season. The order below is determined by confidence rankings, from No. 1 (most confident) to No. 4 (least confident). Sessler’s record against the spread entering Week 15: 23-17-1.

The lines below provided by FanDuel are current as of 10:30 a.m. ET on Wednesday, Dec. 15 unless otherwise noted below.

A thing of beauty is a joy for ever:

Its loveliness increases; it will never

John Keats penned these opening lines to “Endymion” back in 1818. Two-hundred and three years later, his words hover as a fitting description of what we saw from Justin Herbert on Sunday. How else to describe the passer’s 59-yard laser to Jalen Guyton, a ball that hung in the air for silent, gorgeous seconds before hitting its target in stride to paydirt?

“When you see something special, normally it looks easy,” Chargers coach Brandon Staley said of Herbert’s toss. “That’s what he does. He makes the really, really challenging stuff look easy. And that’s a pretty good indicator that you’re witnessing something rare.”

It was a moment the Chargers have come to expect from Herbert, who exited Week 14 as a bona fide MVP candidate. He throws the most catchable deep ball league-wide and helms an attack that — after a rash of frustrating weeks under play-caller Joe Lombardi — has dialed up aggressive downfield shots in romps over Cincinnati and the Giants. Kansas City’s defense arrives as a beastly thing, too, allowing 17 or fewer points in six straight wins. Patrick Mahomes leads an offense that explodes against the Raiders while appearing pedestrian in other bouts. Our friends in the desert adore the Chiefs, but the Chargers of December resemble a team that could beat anyone on the right day. Thursday night has the feel of something special for Herbert, a unique force ready to show society that he’s fully arrived as a superstar with the inner fire to duel — and best — Mahomes.

You dial this up if you feel as I do: The Patriots are the finest creation in the AFC. The concept alone seems to generate an allergic reaction in some: How are we back in a reality where Bill Belichick’s Foxborough bunch are again rolling teams with ease? Deal with it. The Patriots entered their bye week with the league’s second-best team DVOA after knocking off the Bills in Buffalo on a night when Mac Jones attempted three passes. They’ve allowed 36 points over their past five games. Five teams allowed 36 or more in Week 14 alone. J.C. Jackson, Devin McCourty and Adrian Phillips lead a secondary that rattled Josh Allen and Justin Herbert and showered doubt over Baker Mayfield. Pass rusher Matt Judon is this year’s juiciest free-agent addition, headlining a front set to devise dark plans for Carson Wentz.

I trust the Colts as a well-coached, efficient squad that, like New England, aims to wear teams down on the ground and cause tangible chaos.

I trust the Patriots to do all those things and more.

The Texans have plenty of problems, yet vibe as highly functional next to the bubbling disaster unfolding in Jacksonville. On the field, the Jaguars are something rare: Nothing short of the worst offense I have ever witnessed since falling for football a billion years ago in 1986. In the Year 2021, Urban Meyer’s “attack” has scored 64 points since Week 8, the fewest over a seven-game span in franchise history. Rookie quarterback Trevor Lawrence is coming off a four-pick meltdown against Tennessee. I operate under the assumption that Meyer has all but lost the team on the heels of a scathing report over his treatment of respected veteran players and his own assistants. It’s next-level absurd to see the Jaguars favored in any sporting event on terra firma. Board this Texans bus and don’t look back.

The Titans leaned on their thieving defense in Week 14 to suck oxygen out of the Jaguars disaster we just lashed above in print. The much-needed win kept Tennessee atop the AFC South and suppressed ugly memories of the two games prior, back-to-back losses to the lowly Texans and soaring New England in which the Titans offense coughed up nine total giveaways, scored 26 points and looked overwhelmed due to a bare cupboard of skill-position talent. D’Onta Foreman and Dontrell Hilliard have done their best to mask the loss of Derrick Henry, while Ryan Tannehill flings passes to a cast of backup-level talent with stud wideout A.J. Brown out of the mix. Julio Jones is no longer the player who once marveled us, but there’s a visible grit to Tennessee.

The Titans face a Steelers team lacking along both lines. Pittsburgh is a middle-of-the-road item, but the Ben Roethlisberger of recent days has thrown the ball well and given his offense a chance. As do Diontae Johnson and occasional doghouse dweller Chase Claypool, who combined for a 13/169 line in a tight loss to the Vikings that saw Pittsburgh light up Minnesota for 28 second-half points. Pittsburgh’s defense still sits a lowly 27th in DVOA, even with T.J. Watt on the field. His availability is TBD due to a groin injury, but Tennessee’s chances for gaffes and bone-crushing takedowns of Tannehill surge if the DPOY candidate suits up. I see the Steelers surviving in a close clash that keeps their 8-8-1 dreams alive.

Dak Prescott headed to surgery after a gruesome ankle injury